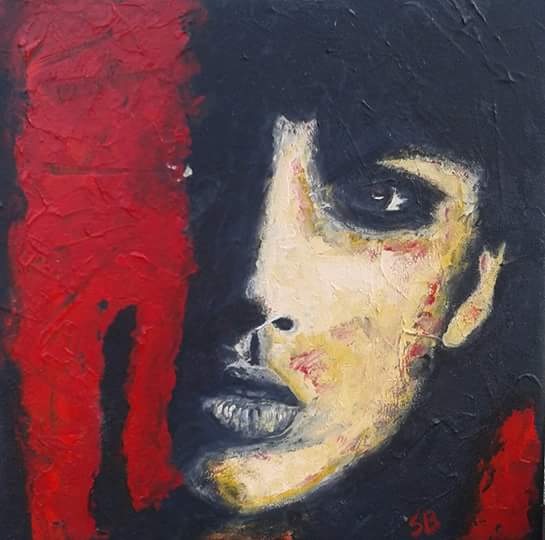 Division, by Stéphanie Brachet. Image courtesy of the artist

Me, a fellow who powders his face
and lets his long, thick hair hang down in a braid.
Evenings when they’re playing the reed horns, those guys
with their straw hats, hemp cords dangling in back,
I turn into Hyangdan, Hyangdan the Maid, wrapping
myself in a dark red skirt.
We get hold of some just-wide-enough space
in the town market, and with the lights turned up
out on the asphalt, for ten minutes my voice, my man’s
voice gets subdued.
Over in a village up across the mountain
was a pretty girl I’d have loved to give
a silver ring to,
but the very next morning
she’d have taken it off, I know it!
I must have gypsy blood, the way I wander,
wondering each day what little town we’ll enter next.
Following the mule
loaded with all our props,
shaking dew off the wild strawberries we find
the dawn light, as it spreads across our road,
like the reed horn that calls out the ones who want to see:
mixing sadness and happiness, it all opens out before us.
~ No Ch’ŏn-myŏng, trans. from Korean by David R. McCann
No Ch’ŏn-myŏng (1911 – 1957) was active in the 1930s as a poet, fiction writer, journalist, and public intellectual. In the turbulent literary landscape of the colonial era, No stood out with her distinctive voice in her writing. She refused to be a poetic object and asserted her identity as a woman speaker in her work. Despite her independent and strong personality, her poems often reveal her desire to hide or speak of the unspeakable.
David R. McCann is the Korea Foundation Professor of Korean Literature at Harvard University. He has published twenty-four books: anthologies, studies on Korean literary culture, translations of the poets Sowol, Pak Chaesam, Kim Chi Ha, Ko Un, Kim Namjo, and So Chongju, as well as four collections of his own poetry.
David R. McCann’s translation of ‘Performer, Male’ originally appeared in ‘The Columbia Anthology of Modern Korean Poetry’, ed. David R. McCann (New York: Columbia University Press, 2004). The editors wish to thank Columbia University Press for generously granting permission to republish the translation here.

“So hurry, dye those duppatas, dot those elegant paisleys,/ So place those fraying jasmine wreathes/ round delicate wrists…” Poem of the Week (September 2), by Rakhshan Rizwan.

Author of the Month: Lorna Brown

"I wanted to examine the people on the fringes of society, and how others' perception of them led them there....