When asked to select four Portuguese-language writers for The Missing Slate, my first thought was to choose only female writers, because so few women get translated. Elena Ferrante is a rare example. I’ve been translating for about thirty years now and, in that time, have translated thirty-one male writers and just seven women writers: five novelists and two poets. It was hard choosing just four writers, but my task was made easier by the enthusiasms of my three fellow translators: Annie McDermott, Zoë Perry and Victor Meadowcroft, who will explain their choices themselves.

I would also like to mention a few other female writers, whom we could also easily have chosen: Lídia Jorge (‘The Migrant Painter of Birds’, in my translation, was published in 2001 by Harvill, and a short story of hers – The Bird Hypothesis – can be found on the Asymptote website), Dulce Maria Cardoso (‘The Return’, tr. Ángel Gurria-Quintana, Maclehose Press, 2016), and two other fine authors who have never been translated into English: Maria Judite de Carvalho and Maria Velho da Costa. 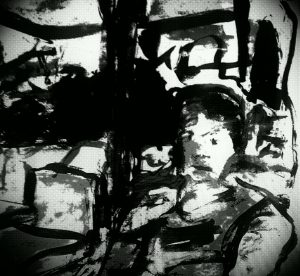 Artwork by Adam Kluger. Image courtesy of the artist.

As a child, she had prayed for Mozart.

In those days, Uncle Octávio used to sit in the armchair by the window, listening to symphonies and concertos while he tugged at the hairs sprouting from his ears and picked at his teeth with a toothpick. If anyone attempted to come in, he would swear loudly and hit the table hard as if hoping the noise would frighten off the intruder, who had, by then, beaten a hasty retreat and disappeared off into the depths of the corridor.

Uncle Octávio would scuttle over to the door, reach, futilely, for the place where the key should have been, but wasn’t, and then, instead, lean a chair against the door and place two hefty tomes on the seat for good measure.

Having done this, he would bustle back into the room, harumphing and mopping his brow with his handkerchief or else blowing his nose, and, only then, would he carefully lift the arm of the record-player and place it roughly where it had been before he was interrupted. He would sit down again, sigh and raise his eyes to heaven, like one of those pictures of martyrs in the prayer book, then settle back against the cushions on the chair and appear gradually to fall asleep, his hands folded on his paunch.

‘Beethoven,’ he would say at last, opening his eyes and raising one index finger, when, finally, the music stopped. And he would look at her with a smug, mocking smile, as pleased with himself as if he had won a battle.

She, in fact, hadn’t heard much of the music at all. She had sat there studying the tassels on the curtains, which swayed violently whenever he thumped the table and continued to do so for a long time afterwards. ‘Fools,’ said the cellos. ‘Can’t a man have a moment’s peace in his own house without some imbecile coming along and spoiling everything?’ (‘Without some imbecile coming along and spoiling everything,’ repeated the first violin in a louder, shriller tone.) ‘Go to hell, go to hell,’ rumbled the doublebasses ominously.

It had doubtless been Uncle Inácio who opened the door, she thought. It seemed unlikely that Aunt Isaura or Arménia would have been so imprudent as to burst in just at that moment. Although, of course, they wouldn’t necessarily have been able to hear the music, they were, after all, half-deaf, which was a considerable aid to their good relations. Arménia couldn’t hear Aunt Isaura muttering sourly as she tied her scarf tightly around her head, ‘Silly stupid woman, meddling old busybody’, and Aunt Isaura never heard Arménia letting slip through her toothless, rotten gums, ‘God, that woman gets stupider by the day. I’ve had just about all I can stand of her.’

So it was probable that neither of them had left the kitchen, but had only rushed anxiously to the door when they heard the commotion, sighing, as they always did: ‘Oh, dear God, not again!’, while Uncle Inácio fled, stumbling on the stair carpet, and swiftly disappeared behind his bedroom door. Then they would hear the key turning in the lock.

It was true that there were injustices in the world, and perhaps you couldn’t expect all, or indeed any, to be put right. You probably just had to grit your teeth and live each day as it came, as if injustice were not unjust.

Uncle Inácio never lost or forgot the key to his own room; he always carried it in his jacket or trouser pocket, or else around his neck on a length of string. He would hide it away if he was particularly tense or if his heart spoke to him of some danger. One day, she had surprised him diligently scooping the soil from a plant pot with his bare hands in order to bury the key. He had started, alarmed, when he heard someone approaching, then, when he saw it was her, had merely winked at her and placed one finger on his lips, cautioning silence. His mouth was smeared with earth, and his straw hat, which had slipped off his head and down his back, hung suspended by a thread-thin piece of elastic.

‘Beethoven is at the very top of the ladder,’ Uncle Octávio used to say, laughing loudly and putting the record back on the shelf. ‘Mozart’s stuck at the bottom, so far down you can’t even see him. He hasn’t even reached the first rung, poor fellow,’ he would add, laughing again and punching the air with his fists as if he were beating someone up.

She did not respond and swallowed both her answer and her anger. She would look defiantly up at him, but not say a word. At night, though, she prayed for Mozart, for justice to be done and for the world finally to recognise him, Mozart, who – so people said – had not even reached the first rung, and was despised, pointed at and mocked by everyone. Because at the time, she assumed that Uncle Octávio, who seemed to know so much about music, was expressing a universal opinion.

It was true that there were injustices in the world, and perhaps you couldn’t expect all, or indeed any, to be put right. You probably just had to grit your teeth and live each day as it came, as if injustice were not unjust. Maybe there was no alternative.

‘I promised my father I would never have him put away,’ sobbed Aunt Isaura, falling heavily onto the sofa as if on the point of collapse.

Uncle Octávio wasn’t listening, nor did he wish to hear any more about the matter. It had all been said before, but they always came back to square one.

‘It’s either him or me,’ he would thunder, purple with rage, striding up and down the room, appearing suddenly to grow in size and fill the whole space, like a bloated frog.

‘I promised my father on his deathbed,’ Aunt Isaura would declare, burying herself more deeply in the cushions, weeping and covering her face with her hands.

On other occasions, it was Aunt Isaura who looked like a bloated frog. She would jump up from the sofa and advance angrily across the room: ‘I cannot break that promise,’ she would cry. ‘Either he stays or I go,’ she would say, echoing, on a higher note, Uncle Octávio’s furious words.

"We will both skitter and yield in the coming months,/ like the surface of unbuilt ice." Poem of the Week...