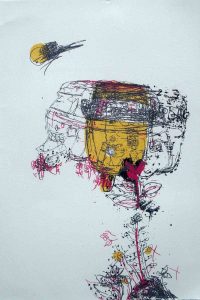 The GAZelle van rattled up to a roadside checkpoint fortified with heavy sandbags, swarming with kebab vendors and hawkers with air mattresses, then turned off the road and raced towards the mountains. After thirty minutes or so, the second-rate landscapes gave way to heaps of white slate and a bottomless sky spread out beyond the windows. Somewhere below, a hundred and fifty meters or so from the twisting road, a little creek glistened, and tiny excavators dug gravel.

Alongside the serious driver, burnt black from the sun, sat a middle-aged man with a paunch, wearing a white shirt and holding a black leather briefcase, attentively staring at the screen of his cell phone through the shimmer of the September sun. In the back were an intellectual-looking old man with a defenseless smile, a red-cheeked woman with her daughter, her work-worn arms crossed modestly on her knees, a young man in odd trousers, accompanying a taciturn old lady, probably his grandmother, a morose, unshaven fellow, two women, one wearing glasses and a drab jacket and the other in an elegant evening dress for special occasions, and also a thick-browed passenger in a skull cap, a young woman with false eyelashes, and a robust, red-haired youth sporting a cap the same color as his hair, all on their way to someplace along the van’s regular route.

Creeping along the serpentine road that overlooked a picturesque precipice, they passed a valley planted with gray cabbage, a large settlement with tidy, half-built houses, a motley assortment of grocery stalls, links of mountain sausage in display cases, and policemen standing along the road in thick body armor. Then there were more rises and dips, then trembling twists of rocky hills and filling stations with little prayer houses with Alhamdulillah written in big letters.

The woman in the evening dress was telling the woman sitting next to her about how her husband’s boss had publicly disowned his own son before he got promoted, a son well-known in the woods by the nickname Phantomas. Her neighbor adjusted her glasses and sighed, looking out at the spots of red light playing among the tops of the boulders rushing past them.

As they passed a cemetery, the driver switched off the sugar-coated chanson and a few people whispered some prayers and made gestures of ablution with their worn hands. An instant later, the music returned, and they rolled into the next village.

“What’s the deal, come on, lemme have it,” drawled the red-haired man, leaning toward the girl with false eyelashes, who had turned away from him. “’s not like anything’s gonna happen…”

“Come on, what’re ya messing with me for? I’m talking to you nice.”

“What’d you say? You trying to piss me off?”

The village was relatively new; it had existed for no more than five centuries.

The red-cheeked woman turned to him and dressed him down in her native language.

“Sit in the corner and leave the girl alone.” Looking at the two of them irritably, she added “I’m gonna switch places with her.”

“You won’t fit, honey,” he laughed good-naturedly, finishing his mineral water and tossing the bottle out the window.

They rolled up to the Hadjal-Mahi bazar, and could hear music playing, hucksters laughing, and cars honking. The man with the defenseless smile stuck his head out the window and looked at the villagers hurrying along the road and cars decked out with ribbons from a wedding procession with heartfelt interest.

The village was relatively new; it had existed for no more than five centuries. When Tamerlane laid waste to the area, the widowed and homeless mountain people and their children had to take shelter in nearby caves until a Tsudakhar man named Huzha built the settlement that was the beginning of Hadjal-Mahi Russian fortifications appeared here during the Caucasian War, and the people of Hadjal-Mahi were constantly torn between the rebellious mountain people and the Imperial governors. They were burned out, exterminated, and plundered by the Tsar’s troops one day and by the intractable Murids the next. Afterwards, the captive Shamil stopped here on his way from Gunib and conducted an afternoon namaz in a mosque that survives to this day; the war ended and the people of Hadjal-Mahi lost many of their private and common lands, they had to pay higher and higher tribute, and they cried out in protest. A rebellion broke out, lasted four months, and after it was put down the leaders were hung and the rest were sentenced to exile and hard labor.

After 1917, the village was divided into four groups. Some supported the Reds, others Denekin’s men, and the third group supported Gotzinsky’s Muslim movement, while the fourth group wanted to bring the Turks in here. Because of that whole mess and five or six provocateurs, a couple of the Red Army men that had been given safe passage through the village in the direction of the Gunibskaya fortress got shot. That provoked the Reds to launch a punitive action and kill off almost all the male population, so many of them went abroad after those events and never returned.

The triumphant Soviets were generous with promises, they supported Sharia at first, and, fearing more uprisings, even finished the construction of the new mosque in Hadjal-Mahi. But later on, they started tightening the screws, and the theologians and their pupils were repressed. The misfortunes of the residents of once-free Dargo didn’t end there. During the years of stagnation, the seniors at the high school played a prank and went after the head of a plaster Lenin with oil paint. Inspectors came and demanded that the criminals be turned over. The people of Hadjal-Mahi refused. But when they threatened to send everybody, without exception, off to Siberia, after deliberating in the town square, the people decided to give in. The young trouble-makers were taken away under guard.

by Anya Logvinova. Translated from the Russian by Larissa Shmailo.