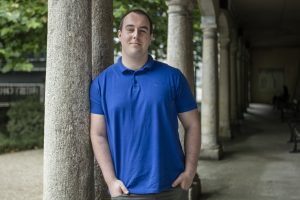 Joshua Schouten de Jel is currently completing his PhD studies at Plymouth University. When he has a smidgen of time between work and research, he enjoys writing poetry and short stories and has had pieces published in Aesthetic Magazine, Octavius Magazine, and Popshot Magazine. In the latest installment of our Author of the Month series, he talks to Mehreen Fatima Ashfaq about the influence of William Blake on his writing, the growth of a story, and growing up on the North Cornish coast.

What inspired you to write ‘Song of Silence’?

Often, a story will grow from a sentence, a scene, or even just a description. I find that allowing the narrative to unfold organically gives it a better fluidity — and, which is also great, the ability to surprise me! In the case of ‘Song of Silence’, it began with the fire filtering through the frosted windows, faintly illuminating stacked chairs, decking: an emptiness which is important to the rest of the story. It is, of course, the lack of Daisy’s presence which hurts Albert, but the way in which this was teased out developed through sensory stimuli: the strange notion that something lingers in something else.

“It was quiet, therefore, apart from the roaring of the sea which slowly began to absolve into a song of silence as the waves, rolling, pushed with the steadiness of the past against the presence of the cliffs.” What does the song of silence represent to you?

I love listening to the sea: its omniscience. I miss it living inland, and I remember it as an enveloping of sound which seeps into the bones. The sea becomes the body, and in that sense it’s almost quiet. For me, there are many parallels to make — waves and skin, currents and memories — but it is the vastness concentrated in a moment, when we hear the roar and release, the relentless rolling, which I find so peculiarly apt to describe the present.

I found your use of the word ‘zawn’ interesting. I’m from Greater London and hadn’t heard it before! I thought it was a clever way to anchor your protagonist. Have you spent time in any of the places you mentioned in your story?

Yes, with regards to the North Cornish coast, and no, with regards to the German countryside. Having spent a lot of my childhood on the North Cornish coast, I’m instantly drawn to its beautiful beaches, rugged clifftop walks, fields, abandoned mines, moorland, and the quietness of rural places. This is not true of all of Cornwall, but there are certain spots, certain ‘zawns,’ which still capture the imagination. I find that, whichever way I turn, I usually turn to these scenes.

Studying, rather than picking up a book for pleasure, also forces you to engage with styles you’re unfamiliar and, maybe, uncomfortable with; for me, this was Modernism.

The German angle was, initially, unexpected, but grew as the characters themselves grew. This is the great thing about writing, and its ability to surprise the author as well as the reader! In part, I guess I subscribe to the idea that characters have a life of their own, that they are able to teach us something; but I also think that they embody parts of ourselves, and to that extent writing is a process of reflection. Perhaps that’s why I chose the rugged, rural landscape of Bavaria.

There’s a lovely interplay of light and dark in ‘Song of Silence’. For all of our aspiring writers out there, what impact do you think formally studying Creative Writing has had on your work?

Studying Creative Writing, and English Literature more generally, is an awakening; it is an immersion in literary styles, ideas, genres, ages, and also an appreciation of those things I’ve highlighted. I would like to think that I would have come across the authors and poets that I studied at university at some point, but university introduced me to those authors and poets a lot sooner. It is hard with work and family life to find the time to read and write, and looking back I wish I had taken even more of the opportunities which were available to me at university.

Studying, rather than picking up a book for pleasure, also forces you to engage with styles you’re unfamiliar and, maybe, uncomfortable with; for me, this was Modernism. Reading Joyce and Woolf was shocking, in the greatest possible way. It is important to be pushed as this pushes your own writing. Without having been made to read these works, I’m not sure if I would have dared to pick them up! Especially ‘Ulysses’! I should also think that my own craft would have been seriously affected as a result.

You mention a love for the poetry of William Blake. Is that something that influences your fiction writing?

Yes, even if it is just subconsciously. I am currently completing a PhD on William Blake, and having read his works — and for such a protracted amount of time — it would be surprising if his idiosyncrasies had not seeped into my own writing style. There is something fresh, dangerous, wild about William Blake’s work which, thinking about it, may be reflected in my childhood growing up in Cornwall, and why I turn to such landscapes in my writing. With regards to his poetic style, I think any imitation, even in prose, would fail to do Blake justice. I think it would also fail to live up to expectations.

The exploration of light and dark which you mentioned in an earlier question is something which perhaps stems from Blake. His engravings are vibrant and alive. There is an energy which is replicated in his verse. The contrast, rather than the blending found in chiaroscuro, is something which I like to employ: the fire in the opening scene, the red roof of St. Bartholomew’s church, headlights across the clifftops. The influence of poets on a fiction writer’s work is another reason to read widely and to experience a variety of genres and styles. You never know what will influence you.

"Three paper rosebuds/ strung on an unbreakable thread..." Poem of the Week (5 April) by Alice Rahon, translated by Anna...