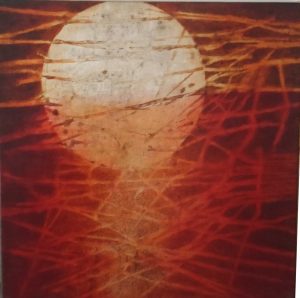 The fire which burned full of promise inside the pub filtered through the frosted windows to cast a pale, limited light onto the chairs stacked against the wall. Above, sills were hung with fronds; all around, the terrace was set apart. As Albert leant into the door with his shoulder, bitter in one hand and Daisy’s half-glass of wine in the other, a sudden stronger glow beat the paved steps leading up to the threshold,

Then, the better light went out. No one remained outside. The terrace was empty and nothing moved on top of the cliffs. If there were people on the beach below then Albert could not see them or hear them. Instead, he took in the tintinnabulation of the fading sun and the scintilla of stars upon the offing. The whole scape. He placed the drinks on a nearby table.

He was happier here. At home he had started to struggle. Cooking took far longer than what he remembered. Cleaning didn’t happen at all. He found it impossible to lie down in bed, so slept in an armchair next to the fire. But he woke cold. Brittle. He had taking to smoking again – something which he hadn’t done for nearly sixty years. The warmth consoled the space between his ribcage. Got to places he couldn’t. The mornings were always a particular struggle. They were slow. Demanding. Especially in winter, the air was also heavy. Making it from Upton unto the clifftops had become a trial; necessary, because only there, staring out onto the expanse like a lambent sheet, he could wrap his mind in gentle ablution.

After catching their breath above the breakwater which relaxed its moored bulk towards Crooklets, he and Daisy would make their way across the coarse grass tamped by walking boots and sheep hooves, every now and then mottled by the ochre-white of foam or the beady eyes of sheep dung, and find a bench overlooking the zawn. Their favourite spot.

Few went this way; it was over a mile from Summerleaze Beach and far enough from the restaurants in Widemouth Bay to make it inconspicuous. The zawn also made it difficult to access as it cut deeply into the cliff face below, stranding like copper in the distant mines.

It was quiet, therefore, apart from the roaring of the sea which slowly began to absolve into a song of silence as the waves, rolling, pushed with the steadiness of the past against the presence of the cliffs.

Tonight, the sea was calm and Albert’s heartbeat slowed and settled into the synonymous swell. He was its palindrome.

Albert listened, growing colder, the night air deepening around him. He rubbed his hands together. Still cold. A chill got hold of him.

Albert leant back and gulped at the air, a sharpness gripping the bones of his ribcage.

He patted his trouser pockets, his jacket pockets, and found a lighter and cigar tin. Taking a long mouthful, Albert felt the warmth begin to settle inside of him; a syrupy succour of a familiar aroma he traced to the sweet snow-laden pines of the Mangfall Mountains.

Again at rest, Albert noted that the cigar was indeed Bavarian, a Christmas present from his son, Hans; the taste tangibly late November as if he were following the Kesselbach, holding Daisy’s hand, newlywed and happy as the first shoots of spring.

Yes, they had departed Ingolstadt in the early hours of the morning before the guests awoke, taking the train to Salzburg and reconnecting to Berchtesgaden; a five hour journey which cut across open fields, wooded hilltops, and rivers silent in lays. Telegraph poles flicked past like pages of a book. The burnt-out wreckage of vehicles growing grey and then green.

They arrived at the head of the Königssee where the lake stretched out of sight between the hunches of mountain peaks. Taking hold of Daisy’s hand, Albert squeezed it gently before turning towards the path which lapped the south-eastern side.

At the bottom of the descent fir trees fawned upon one another, creating a grotto of darkness and musk.

‘Even father was impressed.’

‘Friedrich’s got through the worst of it.’

Daisy wrapped her arms around Albert and rested her head upon his shoulder.

‘He’s still not talking about it.’

They took a path carved into the mountainside, ancient and woven through the white-capped mountaintops. Hardy yellow and blue flowers spun a low-lying tune across the earth, soliloquising the month.

They descended along the well-worn route.

‘He was there, though,’ said Albert. ‘And he danced. He even danced with Magdalene. She was made up.’

‘He’s happier with children. They don’t ask him questions.’

Albert thought about his younger cousin. Albeit with Daisy’s encouragement, David had asked her to dance. Magdalene would be talking about that for weeks.

‘Friedrich spent months on it. He told me so after dinner,’ said Albert.

‘He really cares about you.’

Albert chuckled to himself.

‘He really cares about you,’ repeated Daisy. Albert didn’t respond. ‘He remembers a lot from your childhood.’

Albert drew Daisy towards him, hugged her, but didn’t say anything.

‘I didn’t know you were part of the Youth Movement.’

‘Yes,’ said Albert. ‘I was, until all the scouting groups were closed.’

They continued down a slope and followed a track forged by the perforations of hiking boots.

It had only been three years, Albert kept reminding himself: three years, and just one year since they had met. And now they were married. He though it strange and yet comforting that he had been able to find happiness. Keeping his thoughts to himself, Albert mused that happiness was a miracle of life.

‘You should open up to your brother more.’

‘He misses you, now that you’ve moved to England. He thinks I’ve stolen his big brother,’ said Daisy.

They took a path carved into the mountainside, ancient and woven through the white-capped mountaintops. Hardy yellow and blue flowers spun a low-lying tune across the earth, soliloquising the month. Albert closed his eyes: an inner unravelling of the hank of harmonies; he could now pick out the birds, the different voices of the wind through gorges and valleys, the soft crunch of his and Daisy’s boots upon the hoarfrost and the osculation of their breaths.

The strain was delicate, however. It was slight, like a dream, but all the more real for its mellifluousness.

‘Yes, but the mountains and the lakes and the trees as well?’

Daisy stopped to look around.

‘I’m not sure what I’m meant to hear?

‘It’s this, it’s now,’ said Albert. ‘It’s everywhere, all around like the air but passing through it. It’s beautiful.’

Daisy moved closer to Albert and lay her head upon his arm.

‘I have absolutely no idea what you’re talking about, yet, somehow, it’s comforting.’

They continued to climb until they met the gentle course of the Kesselbach, which they then took as their guide.

Before long they arrived at the eastern shore of the Hirschau peninsula. Standing upon a ridge which overlooked a small settlement on the opposite bank, they saw that at the southernmost tip of this cluster of buildings, in front of the sublime heights of the Watzmann massif, St. Bartholomew’s church rose like a delicate red berry grown into the white basket of the bowl-shaped valley.

In front the Königssee, into which the Kesselbach flowed, lay frozen and impassable.

‘Friedrich was right about this place,’ said Daisy, ‘it’s magnificent. I think –’ she began, before cutting herself off. Turning to face Albert who was looking away, she smiled to herself and whispered, ‘Yes, he would have liked to have seen this. Perhaps we should’ve waited a little longer; left after breakfast.’

‘You know why we left,’ said Albert, looking at Daisy. ‘The train to Hamburg leaves tonight at eight. We cannot miss it.’

Daisy nestled her nose into Albert’s chest. ‘I know,’ came her muffled reply. ‘Still, he would have liked to have seen this.’

They stood at the lips of the frozen lake, intractable, for a moment; staring across the ice and distance, Daisy resting her head upon the pillow of her husband’s warmth and love.

Albert began to stroke her head, humming a half-remembered song from his childhood. He knew there were words as well but these he could no longer remember; only the refrain, spanning time like life, remained dancing within his head, filling it with music and memory.

"A model of how a blog can add value to a mainstream publication by doing something eccentric and focused, something...