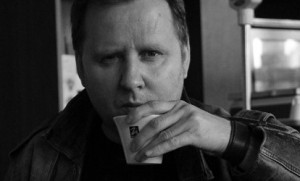 Balla, our January Author of the Month, has been described as ‘the Slovak Kafka‘ and ‘the uncrowned king of… outsiders and misfits.’ Here, his discussion with young Indian poet Radhika Malaviya covers God, dogs, Nabokov, and the reason why his work always seems to end up sounding better in translation.

Click here to read ‘Spring is Coming’, our Story of the Month, in Julia and Peter Sherwood’s English translation.

Your work has been translated into an array of different languages — Czech, German, Hungarian, English, Serbian, Slovene, Polish. Do you feel that the impact of your writing is diminished in translation? Have you found any positive ways in which different languages transform the meaning of your work?

I read Hungarian, Czech, German and Polish but I’m not fluent enough to judge what the translations into these languages have done to my original text. And I have no idea how these translations might work in the context of their specific cultures and how my sentences, ideas and weird stories work within them.  When I write, I automatically do so within the Slovak context and that of the world literature I’ve read. Readers coming from a Hungarian, German, Polish or other linguistic environment inhabit a completely different literary world. And to enter this world by means of translation is for me an adventure with a very uncertain outcome. When I write I spend a lot of time weighing every word — although ultimately I tend to pick the wrong word anyway. All the more reason to admire translators, who have to devote their time to searching for equivalents in another language for my long-sought-for words. But perhaps finding the relevant words comes to them easily and rapidly, since someone with such skills might manage to do in one day what a confused and self-conscious writer has spent months dawdling over and cobbling together. My texts almost invariably strike me as better in translation than in the original, because I have long grown tired of Slovak words and find them worn, smudged and sticky. Luckily I can’t see or feel whether the words of a foreign language that have been used in the translation of my stories have become equally worn, battered, damaged and shorn of meaning, whether they are covered in smudges and fingerprints left by their users — authors and their readers — who have grown just as tired of their own language as I have of mine.

In your career as a writer, you have published eight collections of short stories. What is it about the short story format that you find compelling?

Your story, ‘Spring is Coming’, centers on a repeated question posed by the protagonist, and culminates in a shocking series of symbolic visions. In this sense, there seem to be connections between your story and Vladimir Nabokov’s ‘Signs and Symbols’. Is it fair to say that there are echoes of Nabokov in your work?

Definitely not. I have read only a few stories by Nabokov, I didn’t like them and have long forgotten them so that I don’t even remember why I didn’t like them. I have one of his books on my bookshelf but I have yet to open it. It will be quite a nasty surprise it if turns out to contain the story ‘Signs and Symbols’.

Can you tell us a little about the significance of the dog in ‘Spring is Coming’? What does it symbolize for the story’s protagonist?

It would be disgusting if we really were totally subject to an arbitrary monster, an absolute ruler.
What happens to the dog in the story points, among other things, to the absurd evil that God causes if he indeed exists, to the way creatures are manipulated and pointlessly abused. Because abuse never serves a purpose. It would be better if God did not exist because it would be disgusting if we really were totally subject to an arbitrary monster, an absolute ruler. The years of completely unjustified subjugation to totalitarian power in Czechoslovakia were quite enough for me. The protagonist of this story doesn’t understand the dog’s suffering, she can only see that it is suffering; she can’t make sense of her own life either and that is why she keeps asking questions.  She doesn’t know who she is sharing her life with because none of us can ever know exactly who we share our lives with. Not even those who live alone can know who it is that sleeps in their bed because we don’t know ourselves, our true identity escapes us: lacking distance from ourselves, we lack the criteria for objective cognition and assessment. Those who have discovered God don’t know the answers, all they have acquired is many more unsettling new questions. When I speak of God, I mean a thinking, organizing, acting, purposeful Being, not some universal blind force of nature. But I respect everyone — including readers — who feel the need and have the courage to ask questions, regardless of whether they believe in God.  Should someone answer the question of God’s existence in the affirmative, I wish them strength because they have found themselves at the start of another prolonged exploration whose punchline may be a horrifying, enormous void.

‘Spring is Coming’ bristles with questions about existence and God. At one point the protagonist finds herself questioning God’s appearance and gender, as well as God’s role in the world. To what extent are your life and your writing affected by the belief or lack of belief in a God?

The presence or absence of God is critical for me. Personally, I don’t regard not believing in God as a drawback. A world without God is more logical than one with God in it. If an uncontrolled and totally pointless universe did exist it would be exactly like the one we live in. But maybe this is just a manifestation of an incomprehensible God.  But then who needs a God like that? Or perhaps God exists only sometimes, in certain moments and in certain places. And he’s not responsible for other places and other moments. A temporary lack of existence and a selective responsibility are the attributes of this kind of a God. When I was in Warsaw staying with Jacek Bukowski, my Polish translator — to come back to translation — one morning he stood, still unkempt, looking down at the water tank in which he keeps a turtle and he said: “I change its water, I feed it. For this turtle I am God. But you know that in reality I’m just a lonely, aging guy who doesn’t really decide about anything, except what your stories will sound like in Polish.” And I’m told that they sound quite good in Polish. So in this context I’m a turtle in Jacek’s water tank.

Our thanks to Julia Sherwood for translating Balla’s answers from Slovak.

‘A professional contrarian’ whose work deserves to go on being admired. In memory of Doris Lessing (1919-2013).

"she twirls a sable brush/ in one hand/ and reaches for the next card..." Weekend poem, by Charles F. Thielman.