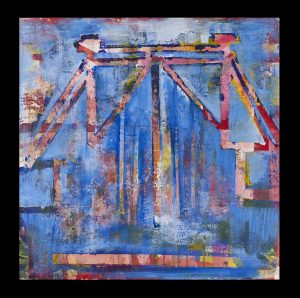 Untitled by Oleksandra Skulinets. Image courtesy of the artist.

Catherine and her husband Britt walked along the boardwalk after dinner. She wore her reddish, almost orange-colored wig instead of the beige turban. The wig was not held fast by bonding strips or other adhesives; a sudden gust off the sea could blow it clean off her head, but she felt ugly in the turban and wore it only at bedtime. A well-meaning coworker at the community college had brought her a jar of Madhatter Glue, which clowns use to secure their wigs. Catherine thanked her and dropped the jar in the trash as soon as she got home.

Tonight Catherine wore a thin rayon dress with black and white stripes. Like all of her new dresses, it showed no cleavage, so as to cover the port-a-cath implanted beneath her left clavicle. She also draped a light-blue satin scarf, decorated with golden astrological signs, over her shoulders. She told Britt that she’d bought the scarf at Macy’s, when in fact it had been a gift from Horacio.

At forty-nine, Catherine was tall and slim with warm hazel eyes, but her long, shapely legs now tended to swell at the ankles. Cancer had made her cheekbones and fine features more pronounced; her arms had begun to look rachitic — “my chicken bones,” she joked. The doctor was less lighthearted about it. “Cachexia,” he said. “We’ll have to fight harder.” Only Horacio found her more beautiful than ever. A painter, he would gaze at her and praise what he called her purity of line.

Dinner had been joyless, not the feast she’d expected on a weekend getaway at the Jersey Shore. Britt had allowed her to order only organic foods, no sugars, no carbohydrates, not even a glass of wine. White bread had become a sin. It was for her own good, Britt insisted. He was right, of course. She couldn’t swallow that much anyway, and she dreaded vomiting. Catherine wasn’t certain, though, that Britt’s enforcement of her strict diet was entirely out of concern for her. He just happened to be interested in health foods, keeping to an impeccable diet himself. He took a dizzying array of vitamins and went to the gym every morning. He berated Catherine for not doing the same. “That’s why you got cancer,” he told her soon after her diagnosis. “You didn’t take responsibility for your body.”

In fact, Catherine had always followed a moderate diet, for long stretches even a vegetarian one. When she was younger, she’d led an aerobics class in the basement of her church. She’d never smoked, and she drank only as a prelude to sex: alcohol loosened her body and took the harsh edge off of her feelings for Britt.

Britt kept going, as though race walking. He could never just relax. Even a stroll along the boardwalk became cardiovascular exercise.

Now, she looked down the long boardwalk. In the distance, the star of the Ferris wheel sparkled against the dimming purple sky. She could see the roller coaster plunging down the track, but could not hear the passengers screaming. She heard only the ocean humming and sighing. It had a salty, fishy smell. Horacio said that a woman’s sex smelled like the sea. Before her illness, this had excited her, but now she could only perceive rotten odors coming in with the tide; she hoped her body did not smell that way. She became nauseated easily. She prayed she wouldn’t throw up tonight. She hated the contractions, the sour gurgling up her throat. She and Britt hadn’t been on a vacation for years—if a weekend counted as a vacation. Catherine had had to beg even for this, and finally had resorted to blackmail.

“This might be the last vacation I ever have. The doctor said a little change of environment will do me good. Please, Britt; I’ll go by myself if I have to.”

Britt hated vacations; they made him restless. He was always thinking about the days of lost income. He made amazing money as an electrician, but was paid per job and depended on a constant flow of work. Catherine remembered some of the vacations Britt had ruined for her. One night in Charleston they took shelter from a heavy downpour under a romantic gazebo, and instead of kissing her, as she’d hoped, he’d only muttered: “Do you know what it’s costing us to be stuck in this stupid rain?” On the second day of a long-awaited trip to the Grand Canyon, he’d insisted on working out at an Iron Muscle gym—even on vacation, he wouldn’t skip a day—and fractured his ankle. They’d had to leave immediately; though in pain, Britt seemed happy for the excuse to abort the trip. Or that time on the cruise to Aruba. Right after sex, he’d turned on the TV and become completely absorbed by Alien.

Recalling so many spoiled journeys, Catherine felt a sudden stab of rage. Strangely, it made her left hand jerk out toward Britt’s. He felt her touch and looked back at her, sneering: “Aw, she wants to hold hands on the boardwalk!” Catherine withdrew her hand quickly and looked down through the cracks between the boardwalk planks. She saw a discarded life preserver, shards of glass, a rusted license plate, and plastic water jugs strangled in knots of seaweed.

Britt kept going, as though race walking. He could never just relax. Even a stroll along the boardwalk became cardiovascular exercise. He was fifty-four and had thick, tufted silver hair; some of his racquetball buddies joked that he used hair plugs, but it really was all his own. His muscles showed through his close-fitting red polo shirt. He had always been handsome: as a young man, girls had come to him easily; he’d never had to work for their attention or develop “sensitivity.” Britt bore an uncanny physical resemblance to Ted Kennedy — a fit, sober version of Ted. Everyone told him so, and he hated it. He was solidly Republican and thought Ted Kennedy was scum, especially for Chappaquiddick. Although Britt was attractive, Catherine didn’t think he’d ever cheated on her. This actually annoyed her. His faithfulness was just another part of his smugness. She half wished he’d have an affair, not simply because it would justify her relationship with Horacio. It might make him a better lover and, well, human.

The Missing Slate’s film team, joined by other editors, review the year in film, picking the one film that stood out for them in 2013. What were your picks?

"For the longest time I thought the night was furred, / a mass of soft hair fallen each dusk." Poem...