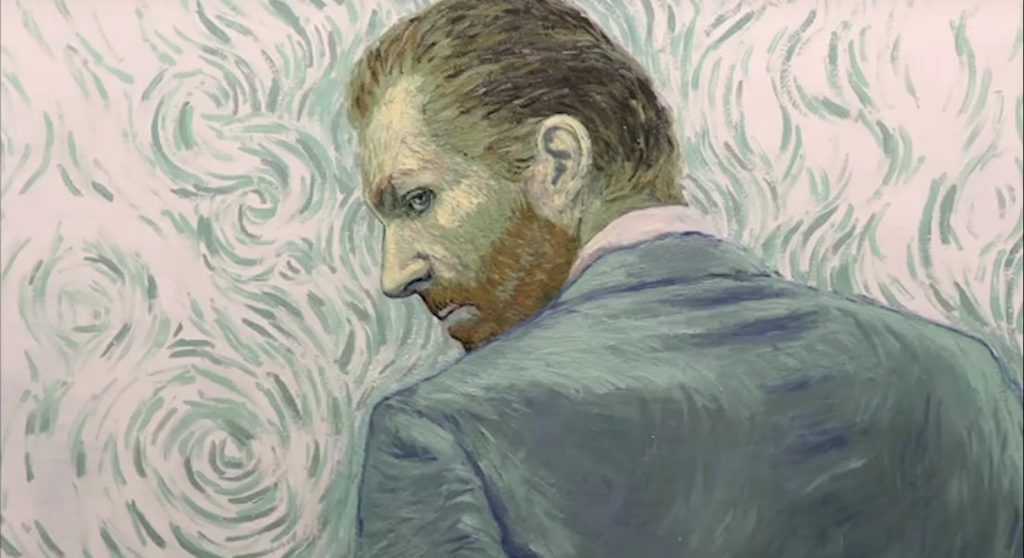 Form and content are the Siamese twins of cinema, fused into one body yet comprising two distinct and sometimes conflicting entities. It’s simplistic to believe that one can be analyzed without considering the other, but Loving Vincent offers a glaring example of a lovely aesthetic that consistently overwhelms the content it conveys—the filmic body’s better half outdueling its more lifeless counterpart.

The production backstory of Loving Vincent is well-known, considering it’s been the primary feature of distributor Good Deed Entertainment’s marketing campaign. One-hundred twenty-five trained painters were tasked with creating 65,000 frames of film, all oil-painted, over the course of six years. The painted frames were then overlaid upon live-action footage of actors performing in front of a green-screen. As an opening title not-so-modestly proclaims, “The film you are about to see has been entirely hand painted by a team of over 100 artists.” What the opening titles neglect to tell the audience is that such painstaking attention was not paid to the film’s story, characters, or thematic substance.

Loving Vincent is structured as something of a mystery, following the young, aimless son of a postmaster (who was himself the subject of numerous van Gogh portraits) as he tries to deliver a letter from Vincent to his beloved brother Theo, both of whom have recently died. The postmaster’s son, Armand Roulin (Douglas Booth), initially considers Vincent nothing more than a moody eccentric, and he believes the official explanation that the artist died by suicide. During the course of his journey, however, he begins to suspect that Vincent was killed by a French hoodlum, which remains an ongoing debate in the world of art history (though by most accounts, including the film’s own ambivalent conclusion, it was indeed death by suicide).

More importantly, Armand also discovers the capital-G Genius of the misunderstood Vincent, who was revered by most of his acquaintances (including those whom Armand meets and interrogates) as a revolutionary artist, though he wouldn’t gain fame until after his death. The film unabashedly subscribes to the Great Man theory of history, which posits that momentous breakthroughs can be attributed to the actions of individuals. To state the obvious, that approach makes some sort of sense with Vincent van Gogh, the forefather of modern art and an untrained painter who developed his own groundbreaking style, which would go on to influence Fauvism and Expressionism. Yet, in both its meticulous recreations of van Gogh’s paintings and its storyline of a young man who pieces together the broad details of the artist’s tempestuous life and mysterious death, Loving Vincent subscribes to a form of hero worship that is not especially complex or moving.

[quote]Loving Vincent is content to mimic van Gogh’s unique visual style while paying lip service to his turbulent biography, resulting in a movie as maudlin as its title.[/quote]

The film’s protagonist, Armand, is an especially uninteresting character, perhaps intentionally: he’s a blank slate who enters the film with little knowledge of Vincent van Gogh, and he experiences almost no conflict or progression of his own during the course of his investigation. He’s apparently meant as a surrogate for the viewer, whom the filmmakers (Dorota Kobiela and Hugh Welchman) seem to believe is also uninformed about the legacy of van Gogh, though certainly art lovers and van Gogh devotees make up Loving Vincent‘s ideal audience. How else can one explain the broad brushstrokes (pun intended) that are meant to encapsulate the life and influence of such a troubled artist? Vincent’s close relationship with his brother, his simultaneous introversion and curiosity about the human condition, and (most interestingly) his battle with depression and mental illness are all cursorily conveyed in bite-size nuggets that resemble factoids more than they do real episodes from a person’s life. Intense, haunting, larger-than-life biopics about Vincent van Gogh have been made by directors such as Vincente Minnelli (Lust for Life, 1956) and Maurice Pialat (Van Gogh, 1991), but Loving Vincent is content to mimic his unique visual style while paying lip service to his turbulent biography, resulting in a movie as maudlin as its title.

That leaves us only with Loving Vincent‘s ballyhooed aesthetic, which is indeed a wonder to behold (and worth seeing on a theatrical screen). While similar to the rotoscoping techniques of Waking Life (2001), for example, it truly is hypnotic to watch the thick swaths of oil paint dance and flicker from frame to frame, presented in bold, dazzling colors. Loving Vincent is one of the few narrative films in recent memory that would actually be improved by muting the soundtrack and focusing on line, shape, and color instead of story, character, and theme. (Surprisingly, it reminded me of such avant-garde films as Norman McLaren’s A Phantasy and Stan Brakhage’s Mothlight, in which movement within and between frames is the primary focus.) There is also the pleasure of seeing some of van Gogh’s masterpieces recreated on the big screen, which becomes a sort of scavenger hunt for art aficionados (“I spy Night Cafe in Arles and Wheatfield with Crows…”).

Yet even that dynamic visual form is problematic, as it pays tribute to some of the finest paintings ever made in a way that seems dutiful and gimmicky rather than honestly appreciative. By supplanting a flimsy story and thin characters onto something resembling van Gogh’s artistry, Kobiela and Welchman seem to imply that the medium of painting, despite its many other assets, is missing a narrative element. But this simply isn’t true: van Gogh’s works contain a multitude of stories, characters with rich backstories and settings packed with swirling emotion, even if they must be inferred by the viewer. This is exactly why painting (and especially the interplay between painting and cinema) is so compelling: it tells stories in a one-of-a-kind way, through suggestion and exclusion, by creating an entire universe within the confines of the canvas. (Even the abstract works of Pollock or Kandinsky could be said to convey a “story.”) Loving Vincent brings to mind that old question of cinematic adaptation, of how to embrace the spirit or intent of source material in a way that’s true to film form. A more daring and truly respectful movie about Vincent van Gogh would translate his iconoclasm and tumultuous character into something unique and challenging, as forceful as the paintings van Gogh created. Instead, the filmmakers spent years trying to recreate the genius of van Gogh, but in the end the vision they present is strictly paint-by-numbers.

This week we’ve got a brand new logo, some excruciatingly bad sex, and a Nobel Laureate being reduced to tears…

"I myself became a gravedigger to avoid the pitfalls of the sex act." Story of the Week (November 3), by...