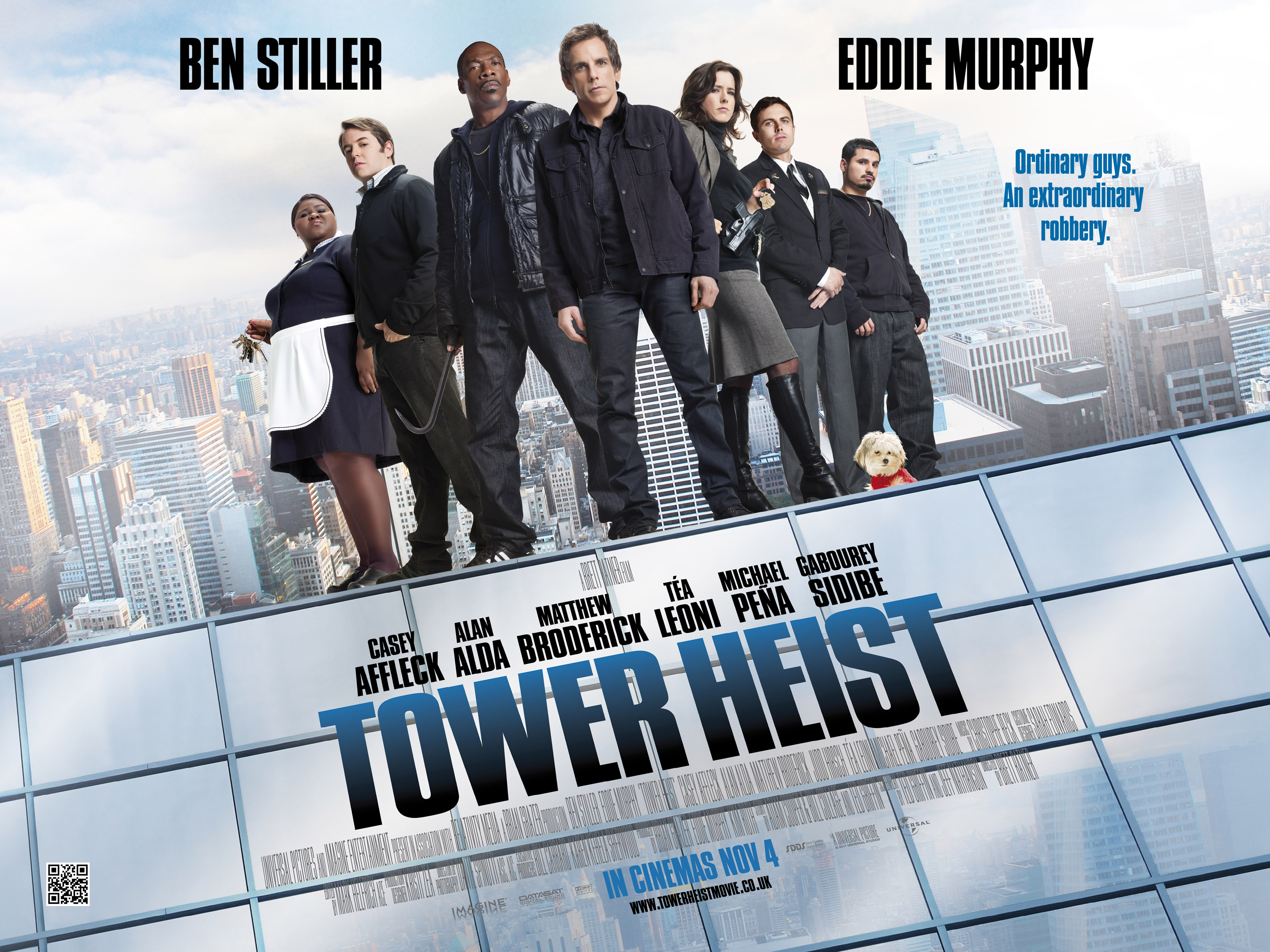 Tower Heist follows Josh Kovacks (Ben Stiller) and his coworkers who are all employed at the Tower, one of New York City’s most elite living communities.  The Tower is owned by Arthur Shaw (Alan Alda); early in the film, Shaw is revealed to have engaged in crooked business dealings which lost the pensions of the Tower employees but which kept Shaw’s own sizable fortune intact.  After a near tragedy, Josh resolves to steal back the pensions money for everyone who works at the Tower and must round up an unruly and inexperience band of thieves in order to accomplish his goal.

The premise echoes other heist movies, such as any of the Ocean’s movies, but goes slightly beyond the boundaries of the genre to include a bit of social commentary and speak more directly the specific economic climate of its time.  Ocean’s 11 (2001) could have been remade in any time period, but Tower Heist has a specificity that not only lends it a certain credibility, but also makes it more appealing than it ever could have been if it were just a heist movie.

Tower Heist is more of a comedic drama than a pure comedy.  The focus of the story is on the characters and their relationships more so than on the actual heist itself.  One of the major criticisms of the film is that the actual heist doesn’t start until halfway through the movie.  While that’s a valid point and would probably annoy audience members who wanted to see a funnier Ocean’s 11, the real strength of this movie, and what keeps it from flopping, is the effort it puts into the characterization at the beginning.  The audience understands and feel a kinship with the characters and thus the betrayal of the characters’ trust is more impactful.

Moreover, because of the care taken with characterization earlier in the film, the entire work was surprisingly heartfelt.  By situating the film within this specific historical and cultural moment, the filmmakers created characters and a story which audiences could care about.  While the film is by no means perfect, it’s definitely successful in capturing contemporary American anxieties about wealth and class relations and then embodying the fantasy resolution of those anxieties.

The ensemble cast performs admirably and is one of the big draws of this film, but Matthew Broderick as Mr. Fitzhugh stood out as horrifically inept with one of the most wooden performances of his career.  Broderick has never been an especially gifted actor, but Tower Heist is his absolute worst performance.  He either could not or would not express any realistic emotion throughout the entire movie; not only is his performance incredibly poor, but it sucks any potential likability from his character.  Thankfully, Broderick’s part is small compared to the other characters and is only memorable for the disaster of a performance he gives.

Eddie Murphy, on the other hand, is quite refreshing.  He seems to be getting back to his comedic roots; his characters in this film was much more like the fast-talking, crude, funny characters that characterized his early career, which is a nice change of pace from some of his more recent projects.

Alan Alda’s work is what really stands out in this film.  Alda’s always been a gifted actor and he’s often been labelled as the ‘sensitive’ type, but nowhere is that put to better use than in this film.  Alda plays the protagonist Arthur Shaw and does an impeccable job of making the character absolutely despicable while still maintaining just enough charm to almost coax the audience into sympathizing with him.  The fact that the audience can see and understand the depth and the nuance of the character’s manipulations is what really showcases Alda’s exceptional talent and what makes his one of the most stand-out performances of the film.  The other actors, Ben Stiller and Casey Affleck, both perform acceptably, but without any real sparkle which is understandable given the mediocre quality of the writing and direction.

Overall, Tower Heist definitely had its high points, but it doesn’t really shine and wasn’t particularly memorable.  While it clearly taps into the collective American imagination, the writing and direction are just not very good.  While there are a few laughs to be had, most of the jokes aren’t funny and a lot of the gags don’t really work.  Tower Heist is enjoyable as a piece of work specific to the contemporary era in America, but it’s not spectacular enough to be remembered for very long.

Emma Gold is a freelance film critic and recently graduated with an MA in Gender & Women’s Studies and English Literature from Lancaster University, UK.

“…you wandering in search of light/ Carrying a piece of sky on your broad shoulders,/ Fill my evening of breaths and oblivions/ With voices…” Poem of the Week (June 24), by Alisa Velaj. Translated from Albanian by Ukë Buçpapaj.