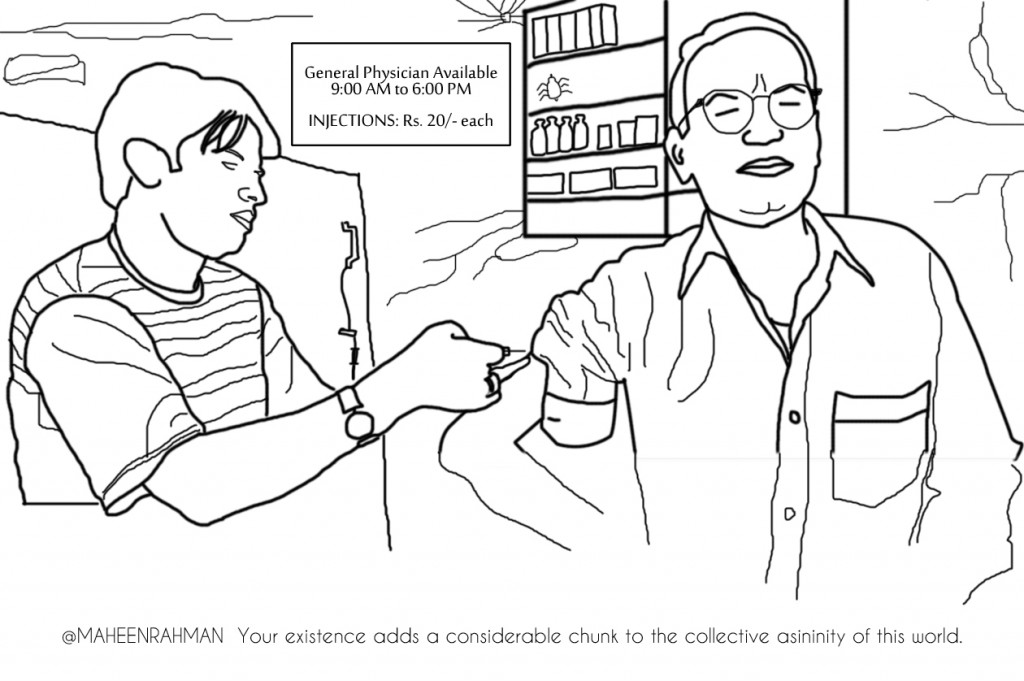 For a minute or two, I sat there motionless, staring from one face to another in the huge conference room where I was being interviewed for my next rotation in the hospital. New rules were being announced. I could hear a brick sink low in my gut when they said I had no choice – a three month rotation in General Surgery was mandatory for every doctor who was fresh out of medical school. Is Surgery really so star-spangled awesome that I must work there whether I like it or not? I would say: NO! But who listens to us – the untouchables on the lowest tier of the hospital hierarchy.

I gulped, nodded and signed on the dotted line, sealing my fate. My stomach grumbled some more, brain screamed silent, despicable words at the interview panel for their sheer audacity and shamelessness – “whatever happened to freedom of choice” , said reason. At that moment, survival seemed unlikely.

I came home, slumped into a chair and furiously sent text messages to anyone who would listen. You can’t just join Surgery and not rant about it. Many a “this too shall pass”, “you will do fine” and “be careful” later, I felt better. The place better have McSteamy, McDreamy and House if they expected me to work there.

I walked towards the Surgery Department avoiding the ocean of salivary secretions on the road that people so happily add to everyday. Clearly, hygiene – that too at a hospital where it is of the utmost importance – takes a backseat so it doesn’t matter if you riddle the pavements with your bacteria-laden spit. The ward is located on one corner of a hospital in a dingy, old building that reminded me of Snape’s Potion’s class, except this reeked of Pyodine and Dettol instead of nasty, boil-inducing potions.

The icky, warm blood hit my hands, scrubs and nose. I laughed through my teeth and excused myself politely but was told later that unless the procedure ends, nobody’s allowed to leave.

I introduced myself to the lounge full of doctors and, to my utter disappointment, there were no McDreamys or McSteamys. Grey’s Anatomy was a lie. To make matters worse, I had come across one of the worst “Ghooran Chatoos” in the whole hospital. I couldn’t believe my luck.

Ghooran Chatoo not only took pride in being a walking-talking MRI machine, he also excelled at the art of offending anyone in the doctors’ lounge by tuning in to “Pashto Mujra” TV channels. If bookstores stocked “Sexual Harassment 101 for Dummies”, he would have been the perfect candidate.

The next day, I bought myself a hideous set of green scrubs and went to the Operation Room. To call it an Operation Room is wrong because it’s more like a fish market in a distant village in China. Suffice to say, I scrubbed and squeezed my way towards one of the tables and started observing the procedure. Within two minutes, (and as karma would delightfully have it), the surgeon who was operating had nicked a vessel and nobody but yours truly stood in the line of fire. The icky, warm blood hit my hands, scrubs and nose. I laughed through my teeth and excused myself politely but I was told that unless the procedure ends and / or in case of a dire emergency, nobody is allowed to leave.

During the next few days, I learned how to stitch wounds and it did not feel like sewing, as one of my professors once told me flashing a Cheshire cat grin. I wish I could’ve said, “You sew inanimate objects, retards!” Ah, the things we leave unsaid.

The experience in the Emergency Room during my second month left me speechless. If bomb blasts don’t kill our people, they shoot and stab each other. Ergo, everyday there are at least five or six gunshot wounds and one or two stab injuries.
As the third and final month approached, I found myself counting down the minutes. Patience may be a virtue but not when it comes to living one of your worst nightmares. Add karma to the equation because the bitch really wants to get back at you for some reason, and I’m screaming profanities at life’s atrocities, albeit soundlessly.

Despite the incessant chatter by the resident surgeons encouraging me to join the Dark Side and long discussions on how surgery is the savior of mankind, I have resolutely denied all interference, cake notwithstanding. My fate is my own: nobody gets to drag me to that hell hole. Not again.

Thirteen is a narcissistic, obsessive doctor who is mostly a pain in the ass or neck (depending on whether you’re a glass half full or empty sort of person).

“in the year of the spider —/ everyone’s weaving a ladder/ of cobwebs, and trying/ to fly when they’re falling…”
Poetry by Zewdu Milikit, in Amharic and English.

Awkward Nothing forces the feelings issue more than Valentine's Day. Matty is finally moving on, or at least working at...