The critics have been split on this one strangely, drawing contrasts to the network’s other quirky ensemble comedy, Community especially after its return was pushed back. I’m enjoying it though I wouldn’t mind seeing a little more of Perry’s assistant who appeared previously on the network drama Kings, one of the high-concept shows you know aren’t built to last on primetime television. Anyway, Go On follows a grief counseling group, each of which has lost someone important to them. Matthew Perry’s back on TV, in comedy, winningly playing a widower with a bitter, tough-nut exterior but with his heart in the right place. The pilot was engaging, funny and I’ve stuck with the show. It’s becoming a staple. Though perhaps not as amazing as Cougar Town, New Girl or Raising Hope, it is quirky and engaging.

When I first heard about this show: cop-show set in 60’s Vegas before the city became the gambling haven of today, my reaction was “huh?”. I thought Dennis Quaid must’ve hit a career low when he agreed to do the show, but it’s a gem. With the killer cast (Quaid, Michael Chiklis, Jason O’Mara and Carrie Anne Moss among others) and engaging personal conflicts between the Chicago mob’s Sorvino (Chiklis) and tough cop (Quaid), there’s something here. I’m watching until I’m given a reason not to. Pure character-driven drama.

The trailer for this show wasn’t helpful or particularly engaging. It was just weird. But because I decided to do a full pilot run, I checked it out. The pilot was engaging, the idea that 999 Park Avenue is actually the home of the devil (666) who lives there with his wife, offers people the good life in exchange for their soul, isn’t a new concept. But somehow the actors (Brothers & Sisters’ Dave Annabelle, Grey’s Anatomy’s, Lost’s Terry O’Quinn and most recently former Desperate Housewife Vanessa Williams) kinda make it work. It’s a decent time pass for me but isn’t a staple, so if nothing else is on and I’m desperate for some brain sucking activity, I’ll consider this. It’s not a pure supernatural show as in not a lot of demons and stuff (from what I’ve seen) but the idea is sinister foes lurk in the shadows. If cloaks and daggers are your thing, you’ll like this show. 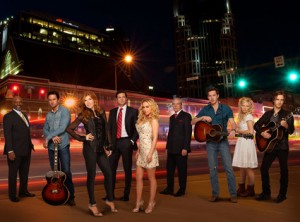 Mrs. Coach (Connie Britton of Friday Night Lights) is back on real television after the frightening turn in American Horror Story and my goodness, what a fantastic return it is. ABC’s making the mistake of promoting this show as a country soap but it’s so far from that it’s laughable. This is a smartly written (the script comes from Thelma and Louise scribe Callie Khouri) drama with great acting from Britton, Eric Close, Hayden Panettiere (in her first major role after Heroes), and newcomers, with its heart rooted in career, relationships and family. It reminds me more of The Good Wife than a country music driven Desperate Housewives. The show’s shot on location in the heart of the country music scene in Nashville, TN. The pilot sets up a nice career mirror for established country music artist Rayna James (Britton) and newcomer Juliette Barnes (Panettiere) who’s the young kid on the block versus the fading glory of Rayna. To say the two don’t get along is obvious but Rayna doesn’t view Barnes as a threat, musically and Barnes is trying to create her own image as a talented musician versus a sex symbol. Throw in Rayna’s lead guitarist, Deacon being poached by Barnes in an attempt to enhance her career as a serious musician and you have some good drama, not to mention an unwitting love triangle with a very married Rayna. There’s also a little bit of a parallel story going between Deacon’s niece (Clare Bowen), the talented young songwriter and bartender at The Bluebird Cafe who doesn’t realize her own potential and her “writing partner” who’s been harboring a crush for her for three years, but she’s oblivious. The relationships, in less experienced hands, would border on soap territory but Khouri gets the best out of the characters so there’s no black or white, there’s a ton of gray and you don’t really hate anyone. I think that’s instrumental that each character is beautifully flawed and human. I’m keeping this show. It’s also got great music and unlike Glee, where each character just bursts into song from time to time, live music is used more poignantly. If you saw the last five minutes of the pilot and didn’t fall in love, I’d be very surprised. It’s an evolving story and like much of life’s great stories it can be heartwarming and heartbreaking but you keep chugging along.

Pakistan. It’s everywhere lately. When I saw the trailer of this show, I wasn’t sure what to expect. But, like Vegas, it hooked me straight from the pilot. Make no mistake: this is a conspiracy-driven show and pieces of it are going to come out slowly but what I like best of all is that the characters are strong, smart individuals who know their people. Each of them, good or bad. But it shouldn’t surprise me: this is a Shawn Ryan show and he’s done nothing but good TV (FX’s The Shield and Terriers, Fox’s The Chicago Code and served as the showrunner for the second season of Lie to Me). If you haven’t seen the trailer, the series revolves around a submarine crew who, when called upon to nuke Pakistan for no real reason refused and so, of course, the captain and his crew are now being called traitors to the detriment of the family they’ve left behind. I don’t want to say too much if you haven’t seen the pilot but the plot thickens when they realize things aren’t really right in D.C.

That’s it for the pilot reviews. What about you? What’re you keeping on your radar? Sound off in the comments below!

“MP” is Maryam Piracha, The Missing Slate’s Editor who has a dreadful affiliation with her television set and has been known to go go on TV binges. Hot or cold, she tells it like it is and mostly appears in parenthesized italics.