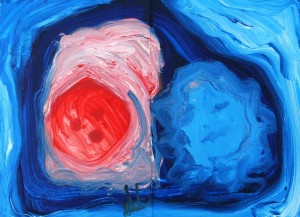 “There They Are” by Merlin Flower

“Why are you making all this fuss? Don’t you see that the photograph is out of focus? Even a blind man can tell that!” Saeed, the most balanced and centered and calm person among us all, tried to explain as rationally as he possibly could to the ugly photographer who, un­disturbed by it all, went busily on retouching some negative. Saeed’s words couldn’t have fallen on deafer ears. For us this calamity, the ruin of the picture, was far more earth-shaking than, say, the Agadir earthquake, or the fear of the Super Power confrontation in Laos and Cuba, or even the possible outbreak of the Third World War. The monstrous, misshapen photographer, on the other hand, went on calmly retouching the negative—as though God Almighty, the Lord of the heavens and earth, had created nothing besides his pencil with the two-inch-long pointed tip and that damned negative. Not even once did he bother to raise his head and look at us.

His prodigious indifference, his colossal equanimity truly burnt me up. I picked up our group photograph and slammed it down on the glass-top counter and roared: “You think the money we gave you was ill-gotten? Don’t you see the picture is so bloody out of focus that none of us is even recognizable? Who allowed you to become a photographer, eh?”

When I slammed the picture down, my hand hit the glass-top of the counter. The slap disrupted the photographer’s composure, but only for the briefest moment. Shaken a bit, he paused for a second. Inad­vertently, his pencil registered a little more pressure than usual on the negative, but that was all. It was as if he had physically absorbed the shock of my little outburst. But he still didn’t bother to look up. He pushed back the thick glasses that had slid down to the tip of his nose. Then he picked up his cigarette from the ashtray, took a couple of drags, coughed a little, shifted a bit and resumed his work.

This threw me into a fit of rage. It was a rare opportunity by all counts, one that we could be rightly proud of. The chairman of our Society had commissioned to have a group photograph taken after the farewell party which the junior grad students had thrown for our graduating M.A. class. He had also agreed to pay for the photograph out of the Society’s funds. For my own part, I had managed to per­suade Shah Ji, the vice president of the Society, to have the words “B.A. (Hons.), Departmental Representative” printed after my name on the photograph, so that after I was finished with the Univer­sity I would at least have a memento of my life there—well, you know, something to brag about.

It was not exactly that I was dying to serve the promising sons and daughters of the nation that I had run for D.R. two years in a row. The purpose of this whole exercise simply was to get an insignia for my blazer pocket and a pin for my tie. I was looking forward to wearing the blazer and the tie during the winters. Then I would have proudly walked down the interminable hallways of the University, shrugging my shoulders every now and then, looking busy and important. But what could I do now? That whole purpose had gone down the drain. Success had eluded me at the very last moment. The first time I decided to run for the position of the D.R., the elections were delayed for so long that when I finally got around to asking for the insignia, I found out that all such tokens of self-glorification had already been doled out. The second time, the president of the Students’ Union had ended up in jail for his alleged involvement in some political affair. As a result, all the activities of the Union were suspended indefinitely. The prospect of receiving the insignia and the pin had again evaporated. And now that I was about to earn the small honor of having my photograph taken, the wheel of fortune had decisively turned against me. To Saeed the loss was not a serious one. He had many times been captain of soccer teams, both in college and the University; he already had a whole pile of blazer insignias and group photographs. And as for Shah Ji, well he was a typical Pathan from the Frontier for whom the only things that truly mattered were com­mitment to studies and the display of the typically northern hospitality.

“Mist soars on the river, my door splits free of its hinges:/ My children’s children, and those I will never see —/ Generations swarm in me,/ Born to this North American soil, dreamers in a new world…” By Meena Alexander.

Features Editor Sana Hussain writes of Pakistan's arguably most controversial writer in Urdu and how the troubled writer coped with...