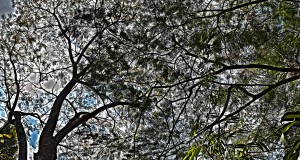 Still, I would be lying if I said I was content. At a certain point, this glorious design I believe in becomes a work of faith itself — faith in the beauty and power of love. Evolution is the architect of our transformation, sure — but it is impersonal, dispassionate and savagely cruel in its long, inexorable path to completion. Civilizations surviving until the consummation of everything seems dependent as much on luck as the laws of nature. It seems there are no promises to me and you. Earth could vaporize tomorrow, with our only solace being that in such a vast universe, somewhere love shall fulfill its purpose. Reality, therefore, suggests that we—you and me—are not necessarily precious as individuals, and that our personal, unique witness to the universe bears no lasting meaning. We might merely be disposable building blocks used for the construction of some wondrous end. Bloom today, wither tomorrow.

The mind doesn’t wrap itself comfortably around such notions. I don’t want to die; I don’t want anyone to die. My need for a narrative that promises eternal life in the presence of love cannot overcome the integrity of my reason, but my reason cannot free me from my need. My cognitive harmony is often drowned out by the buzz of my emotional dissonance. When I try, for instance, to marry the soul with evolution by reason, I trip on paradox and fall into a black hole of conundrum.

When I try, for instance, to marry the soul with evolution by reason, I trip on paradox and fall into a black hole of conundrum.
Yet, on the right New Hampshire night, the stars present themselves in all their glory. I remember the time Gail and I lay on a blanket in the secret garden, waiting for the moon to rise above the trees and complete the stars.  Alchemy occurred, a triangulation of the earth and the stars and us.  My sense of wonder became the awareness that love is elemental. As we headed up the hill to the house that night – the world still, the grass cool with dew – infinity contracted to the peace of the moment, and love shot forth from our tiny hearts in every direction at the speed of light.

Our days pass with similar speed, it seems. Nights, isolated in the muted, starless bedroom air, I wait for sleep. As my mind cools, settles, my thoughts sometime turn to my life — the distant, receding dreams, the procession of misses. The memories float past, a stream of sepia snapshots, vaporous and ironic. It is the movie of me, incomplete, bittersweet and shockingly swift… and I understand that one day I shall die.

This is when the stone rolls away, when the quantum ghost inside me stirs, whispers from the ornate chamber of my longing. This is when it releases into the air, pulling me with it down the hill, past the currants, past the moonlit pond to where my children sleep. This is when night becomes day, glorious and golden and blue, with great sculptured clouds where the angels dream of love in their glowing skins. Awakened, they fly down to us, and where their feet touch the fragrant earth, the dead rise. Families and friends reunite with perfect minds and hearts created from the angels’ dreams, and we live always, daughters and sons of the stars, together in the fullness of love.

Kent Monroe lives in Troy, New Hampshire with his girlfriend and a gang of motley cats and dogs. He prefers to write and garden, but must work when he can to feed the gang. He believes people should smile as often as possible.

“The narrative is fragmented and nightmarish, existing in a state of almost-perpetual darkness, but perhaps necessarily so…”
Jacob Silkstone reviews ‘Z213: Exit’, the first volume in Dimitris Lyacos’ Poena Damni trilogy.