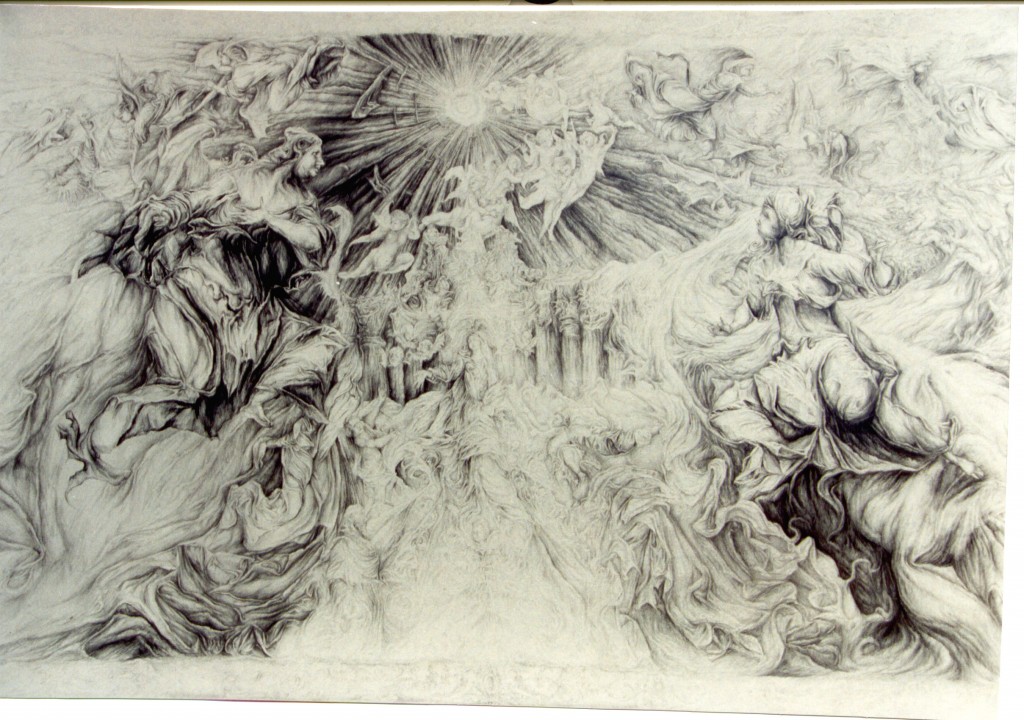 This is the kind of town where you could be sitting in a restaurant, concentrating on your noodle soup, and suddenly notice across the room a man with the face of Harrison Ford, calmly eating lunch with his ordinary wife and bespectacled child. Or, on Sunday, walking down a dismal street, the trucks throwing dust into your face, one of those wooden buses with yellow snouts will go by full of old men in dark suits singing in chorus from the red-edged pages of their hymn books. Some things are the same—the siren still calls people to work at ten and sends them home at five. Poor women sit on their haunches behind baskets of sour fruits whose names I’ve forgotten. The hills are still there, though just about.

I wake up every morning with the idea that something has been missed the previous day and must be grasped before it’s too late, but I end up doing the same things — going for aimless walks, dodging cars, eating rice and pork stew in small places that remind me of the university campus. When I get back in the evening, there’ll be more cars. Cars backing into the hotel compound or trying to get out. Cars blasting music, cars being scrubbed down, cars loved like people. I can hear them as I sit down in the little veranda at the back and try to read.

I’m not sure what I’m doing here. Maia would have woken up in the morning and asked: What’s our plan for the day? We’d start in bed and continue our plan-making through the morning. She’d emerge from the bathroom with damp hair, her delicate skin flushed, and say, ‘I just got a great idea.’ The rest of the day would be spent in the excitement of that adventure — the adventure of being together, of having a shared idea of what we wanted to do, a secret pact between us. No one else knew. That’s love. No one suspects a thing.

I’m a visitor now; I’m sleeping alone on a hotel bed. On Monday morning, I’ll head down to Guwahati and fly back home. As usual, I’ll unlock the door to the flat and then won’t know how to proceed. Grief is one thing. When, abandoning all those plans, your wife dies, you drop everything as well and just sit in a chair for weeks. But later, when you have to get up, when you have to make certain motions to keep life going — that part is harder. The difficulty of being ordinary after Maia was gone, the difficulty of deciding what, without her, had any significance at all.

I started travelling — not an answer to that question but maybe a means of searching for it. The careful budgeting of my pension that we used to sit down to do at the start of every month seemed stupidly childish. I didn’t want savings; I didn’t want to think of that kind of future, the kind animated by money, the sort that flickers with possibilities if you have both love and cash.

I went to Calcutta because Maia and I had met there; I took ferries up and down the Hooghly with men in nylon shirts dropping peanut shells on the floor, their eyes fixed on the goals of whatever small business it was they were up to — all that enormous energy that goes into making a measly living. I could smell their sweat. One guy tried to pick my pocket probably because I looked so obviously, so goddamn, lost. I moved away from him instinctively though I should have let him take it. Either that or stood up to him, bunched my fists before his face.

I sat for hours in the old Flurys which was spanking new and crowded now, drinking coffee and watching people. I flew to London because we had both gone to university there without ever crossing paths with each other.

And I’m here now in honour of the two years I taught philosophy at the university while Maia, laughingly, for the fun of it, became a schoolteacher. There’d been no vacancy as such at the school but they’d invented the subject of drama for her — her job was to instil in the children a year-long excitement about the annual concert, or get them to enact stories from their English textbooks, or make papier-mâché masks and flowing satin costumes.

I enjoyed those two years like I’ve enjoyed nothing before or since. In every frame of my memory there are trees leaning in; I left every class I taught feeling valiant. I believed I was bringing my students something romantic in its remoteness — news of a man called Plato, for instance, news of the misled men and women cramped into his metaphorical cave.

A Word from the Creative Director