The problem with working on projects close to one’s own heart is that it’s easy to get too attached, unable to maintain an unbiased scrutiny and be honest with oneself about what works and doesn’t. I fear this may have been the problem with George Clooney’s latest labour of love, The Monuments Men. The premise is good. It has the bare bones of a great story, one that deserves to be told for sure, lest it be lost to the ages much like the works of art featured in this tale could have been lost. The assembled cast is one that only an artist with Clooney’s prowess could manage to wrangle these days without breaking the bank. However, when one focuses so much attention on the concept of a film rather than on the execution of that concept, things tend to get a bit messy. I’m afraid The Monuments Men falls well short of its lofty ambitions. 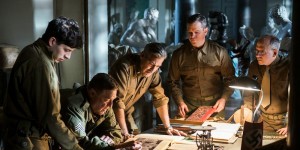 The problems start early on. The long intro feels a bit contrived, as if Clooney is caught between trying to make a classic ensemble war film and a period version of Ocean’s Eleven (or in this case Seven). This is a prime example of how the film could have benefited from the unbiased eye of a good editor, as this whole section would be better off littering the cutting room floor. Honestly, was that extended tracking shot of the Hitler museum model really necessary? The central portion of the movie is where it gains credibility, especially when it focuses on the character of Claire (Cate Blanchett) and her interactions with one of the Men, James Granger (Matt Damon). While watching these segments, I couldn’t help but feel that the whole film would have been much better if it centred around these characters, and the rest of the plot was just a backdrop for their experiences. Instead we get a muddled attempt at a splintered story line, attempting to meander through the final days of the war through interwoven snippets of different characters, causing the film to suffer from character overload, meaning we never spend enough time learning about any one character to give much of a damn about them. In this case, the high caliber actors feel wasted, just vessels used to usher forth a ponderous series of events that take centre stage, rather than nuanced attempts at bringing these real men back to life for the screen.

Despite Clooney’s apparent lack of knowing when to cut a scene, he does manage to capture some moments of movie magic here and there, even when veering so close to the edge of sentimentality it borders on parody. I couldn’t help but be moved by a scene involving a recorded message from home on a vinyl record that Bill Murray’s character hears while he is in the shower, even when that scene is inter-spliced with another that threatens to kill the moment by beating the audience over the head with a message. Other moments that heavy-handedly try to tug the heart strings are less successful due to their obvious nature, and the way things go amiss tonally when you try to convince an audience that men giving their lives to save works of art is a worthy endeavor, before showing the clumsiness of said sacrifice through accidents instead of actions.

What it all boils down to is, no matter how noble an artist’s intentions, the artwork must still be able to speak for itself. In The Monuments Men, it is clear that Clooney and friends had their hearts in the right place when undertaking the task of making this film, but that heart can’t make up for bad writing and even worse editing. What we are left with is a hodgepodge of scenes that haphazardly string together a plot, but ultimately don’t work well together as a finished whole, making us long for what could have been, rather than admiring what was.

"I am considering waltzing into the nearest Catholic church/ and admitting to a murder/ that never occurred..." Poem of the...