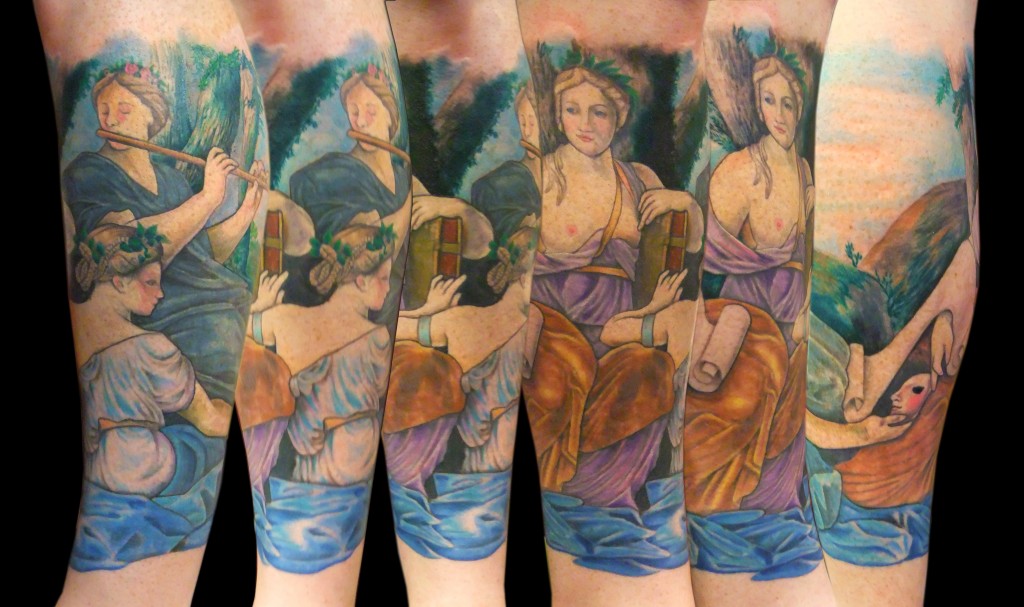 The Muses, by Andrew Sussman

Rugs always lie. This is an inescapable fact. You can have a patchy looking rug, a lush verdant rug or call it a Kermanshah prayer rug of a thousand knots and point it in the direction of Mecca. But no matter what it looks like, or what type you name it, no one can swear to have seen a rug that ever did anything but lie there. We’re not talking about flying carpets or Indian rope tricks here – those fall into another category, belonging to the fantasy realm, where mythical heroes walk among the clouds and whistle up their pet carpet or rope out of nowhere. The very nature of the rug prevents it from any erect, straightforward action. It has a shaggy kind of presence that hints at dark hidden depths – a jungle where truths that no one wants to find lurk. Truths about ants and cockroaches and the inner life of a lizard’s intestines – perhaps even the inner life of the rug itself. The short and curly ones might pretend to greater openness, as hair brushed back from the forehead reveals breadth and honesty, or appears to. We instinctively trust a man with short hair whereas a man with long locks raises a certain kind of doubt.

As for a short-haired rug, well, that can be scrubbed and shampooed to some extent, and there are dustbusters to track those little boogers lurking in its depths and come to grips with the woolly truth. You can clean a short-haired rug to within an inch of its pile and sit back on your heels and think, “This rug is clean and that’s the bare unvarnished truth.” But something always comes out of a rug to surprise you. Even if it’s clipped, there’s still something lurking in that underworld rainforest of pile, even if it’s only fuzz. That’s why in India, they have plain clean striped cloth sprawling on clean cold stone floors. You can see to its heart at a glance. But in India, they aren’t called rugs – they’re called dhurries. Perhaps only the forensic department or one of those LAPD men with strapped pistols and cold steel that are so efficient on TV could beat the truth out of a rug – figure out where it has been and DNA fingerprint it and pin it down.

You can beat a rug – you flip it over the cold, hard wire of a washing line and give it the fourth degree till the dust flies out in clouds. The man in Casino Royale had a carpet-beater, so obviously Ian Fleming met a lying rug he couldn’t bear and thrashed it till it groaned and he got away from it and lived to tell the tale. But anyone will tell you that a beaten rug’s no use until it lies. And a rug that lies, by definition, cannot tell the truth.

Anjana Basu is an author and advertising consultant based in Calcutta. Her poems have featured in an anthology by Penguin India, Writer’s Workshop and Authorpress. The BBC has broadcast her short stories. In addition, she has been published in ‘Brevity’, ‘Gowanus’, ‘The Blue Moon Review’, ‘Recursive Angel’, ‘The Antigonish Review’, ‘The Edinburgh Review’ and ‘The Saltzburg Review’, to name a few.

Reinventing the Reel: None Of The Above