Kelly Reichardt has established herself in recent years as among the foremost darlings of the American independent scene, so the muted reception for her upcoming eco-terrorism drama Night Moves is puzzling, and more than a little intriguing. It’s always more fun when filmmakers don’t do exactly what their fanbase hoped for, and Night Moves’ seeming to slip under the radar at Cannes implies as much. Even if it doesn’t hold a candle to the legendary Arthur Penn neo-noir with which it seemingly shares little more than a title, it’s difficult to imagine that the director of Old Joy, Wendy and Lucy and especially Meek’s Cutoff could film something boring, or lacking in a personal vision. 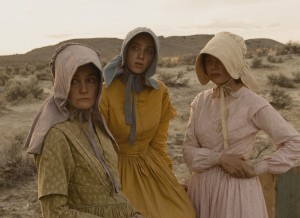 Meek’s Cutoff, Reichardt’s hallucinatory allegory about a group of American settlers navigating a shortcut across a dried-up Oregon desert, remains one of the more original and accomplished films of the new decade. Lost and parched, this scruffy band of frontiersmen and women turns to Bruce Greenwood’s titular guide Meek, a man built out of words in a place where words seem superfluous, if not treacherous. He’s a magnificent, monstrous creation, leading the party astray with incessant streams of misinformation, self-mythologising and fear-mongering, babbled out from the dusty tangles of his prophet’s beard. A self-styled cowboy of sorts, Meek is a figurehead for the vices of the traditional western, rendering the dangers of the genre’s bloodlust, vanity and bluster all too apparent as he guides his followers into peril. By extension, as it wanders lost upon a boundless stretch of sand, Meek’s Cutoff implicates a country incapable of shedding the fervent jingoism ingrained in its Wild West mythology, waging war against the Middle East on the back of falsehoods (the question “is he ignorant, or just plain evil?” is asked of Meek, as well as “I don’t blame him for not knowing. I blame him for saying he did“), bigotry, paranoia and machismo.

Manifest Destiny is demonstrated here to be a conceit of the White American Male, and the shift in perspective is exhaustive; it’s a woman whose even gaze best penetrates Meek’s braggadocio, and a Native American “savage” (Rod Dondeaux) who renders Meek redundant, usurping his status as agreed-upon guide of the group. The film is based loosely on a series of journals written by women, and Reichardt inhabits their viewpoint via a “cutoff” Academy-style aspect ratio which, not unlike the bonnets these women must wear, blinkers our perception of this vast sun-bleached landscape considerably. This dualism of freedom and restriction runs deep; Emily (Michelle Williams, great) is the closest thing we have to a protagonist and is certainly the strongest character here, demonstrating a measured, visionary perspective that only her husband shares with any enthusiasm, but the women are largely deferential to the men’s decision-making (often portrayed from a distance via mumblings that are difficult to parse), at least publicly (Emily’s marriage to husband Soloman is refreshingly, convincingly egalitarian in private), while a caged bird transported with the carriage denotes the irony of “free” American expansionists shackling their women. Indeed, although everybody is treated with the respect that comes with recognising their necessity to the survival of this small party, each person’s role in this group has been delineated by social traditions stretching back to Biblical times – “we’re all just playing our parts now, this was written before we got here“, a resigned Meek says in one moment of clarity.

The Native American meanwhile isn’t humanised or victimised — his characterisation never panders to a US audience’s paternalistic instincts — nor is he imbued with exotic, mystical wisdom although, like Emily, there’s a certain sharpness in the eyes as he surveys his situation. Indeed, he isn’t even given toward acting particularly suspiciously; mostly he serves as an extension of the wilderness, indifferent to the drama surrounding him. He’s only as intimidating as any inscrutable mystery is, a blank canvas upon whom each individual viewer will no doubt project their own prejudices, just like the characters themselves, whose reactions range from hysterical terror to wary watchfulness. Emily allies with him not out of gooey principle but pragmatism, understanding that prejudice and superstition must fall away in the face of bare survivalist need — that a truce with nature is required, however temporary it may be.

if Meek resembles man’s uglier side, the trust and respect denied him is nonetheless offered to the viewer; Reichardt’s direction is remarkable for its unhurried manipulation of space and time, sometimes allowing the otherworldly plains to unfold with yawning disinterest around these scrabbling men and women, sometimes getting in close and focusing on the minutiae of their ritualistic struggles to traverse them. There are moments when Meek’s Cutoff allows a kind of awe for the best qualities of its inhabitants; they transcend their ant-like smallness by addressing their struggles with determination and dignity, and you can practically taste the dust in their throats, feel their nerves jangle as they try to concentrate on putting their calloused hands to mundane and monotonous, though life-and-death crucial, tasks, such as negotiating their water supply down a rocky slope. It’s surreal and humbling to watch them work and appreciate that the existence of you and your civilisation was more than likely enabled by the persistence of such people in the face of the elements, the unknown.

Kimberley Jones wrote in the Austin Chronicle that “location determines plot” in Reichardt’s films, but this is only because location has determined the history of the United States; just as the emotional spaces of Old Joy and Wendy and Lucy seemed extensions of their respective milieus, this group’s palpable dislocation from and dependence on this arid wasteland and its natives provides the beating heart of Meek’s Cutoff, externalising the existential crossroads at the heart of American identity, drawing a line between the nation’s past and future. This crossroads is literalised by the appearance of a single tree at the mysterious conclusion, a sign of a brighter future or mere Jodorowskyian mirage, echoing the passage from Genesis spoken aloud earlier in the picture concerning the “tree of life” (aye, there’s some Malick here too).

The film is so imbued with its location’s inherent tension and unease that it largely evades accusations of soulless pretension its arty inertia might attract, and Reichardt never allows its various allegorical modern-day implications to compromise its devout naturalism. Yes, the director clearly admires Emily above all others in this picture, but not due to some innate ethical decency or compassion so much as her instinct for survival, her scorn for those who lengthen the odds. The naturalism works here because Reichardt’s biases are aligned with what she considers to be nature’s biases; people like Emily lead us to survival, whilst people like Meek would have us perish. From their place in the shadow of the Bush administration, with soldiers continuing to file out like cattle to the slaughter, it’s difficult for any American to disagree.

“The girl addressed as “you” in countless poems/ escapes. She’s sick of being told/ what she knows perfectly well…” Weekend poem, by Frederick Pollack.

"As I walk to the house, she glances up at me like a rat being caught in adultery." Story of...