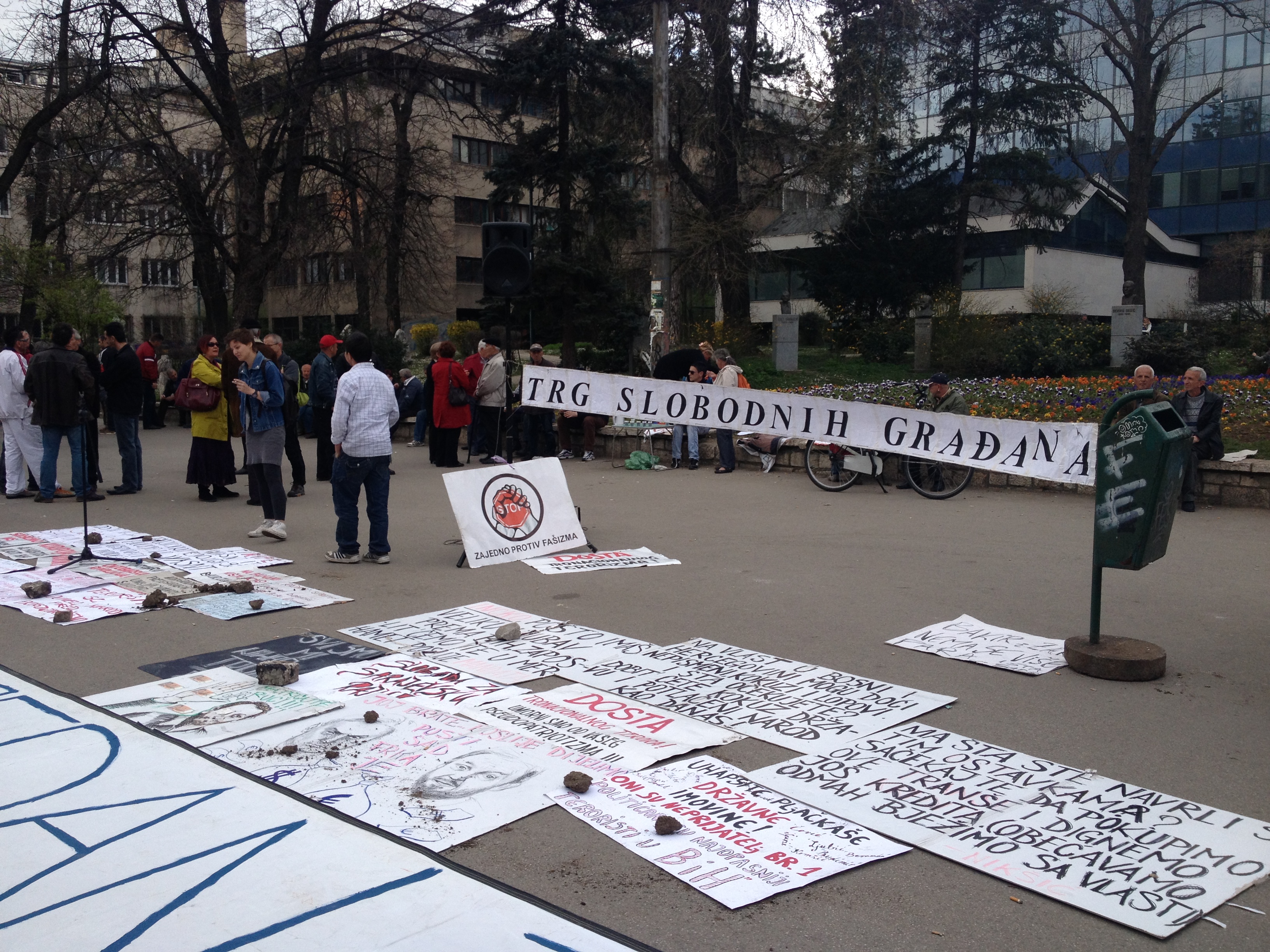 “In this oppressive system, destruction is construction.” — Protestor’s sign

Sarajevo, the capital of Bosnia-Herzegovina, is splashed across the world media in pictures of violence, burnt buildings, and armed conflict. Those pictures mostly date from the war that ended in 1995 with the Dayton agreement. The agreement was meant to be a temporary solution, and dictated the political structure of the country in the interim. However, it remains in effect in 2014 with visible consequences. Today, the same images of violence and burnt edifices have resurged, this time with people attacking the political structure that has led to poverty, corruption, and extremely high rates of unemployment.

The city awoke from 20 years of apathy with a vengeance. Nonviolent protests started by workers in the city of Tuzla spread like wildfire in the rest of the country, intensifying into violent protests for the government to resign.

On Friday, February 7th, the whole country was engulfed in flames. Government offices and members of the Special Forces were being attacked by protestors, but these people were in the minority. They were the ones desecrating, looting, and threatening anyone who dared to object. The vast majority of people were, in fact, passively watching the chaos, though tacitly approving of the actions of the (mostly young) population attacking representatives of the system. Nevertheless, that became the image we are known by. Angry mobs, government buildings on fire, the ruins of private and national property, including the national treasure and the Archives of Bosnia-Herzegovina.

But the aftermath is a mystery to the most of the world media. On the morning of February 8th, Bosnia-Herzegovina awoke in disbelief, as if the whole country were suffering from a hangover, only just realizing all the consequences of their drunken night out. The citizens of Tuzla took to the streets again, this time to clean the mess of the previous day’s events. The protests did not stop in all the cities, but the violence had. This time, the silent majority did not just stand there and observe. Most protestors condemned the damage to national property, but most agreed that violence had been necessary, that it was the only thing that could initiate change in a stagnant political structure.

On the morning of February 8th, Bosnia-Herzegovina awoke in disbelief, as if the whole country were suffering from a hangover, only just realizing all the consequences of their drunken night out.
The facts speak in favor of this opinion. Unlike other, nonviolent protests, such as the ones Bosnians had in the summer, the recent events have produced quick changes and some of the demands of the protesters, such as resignation of some of the members of the government, have already been met. The protests have reminded citizens of the giant political apparatus of the government. Besides the fact that a country of 3.8 million has so many political figures, another shocking element is that the country in such a bad economic situation provides their politicians with a salary for up to one year after they have been relieved of duty. Among the demands of the protestors were proposed changes to this law — a move which is already being considered in some of the Cantons. The demands of protestors in general are concerned with social justice and a lessening of the country’s rampant economic inequality.

However, many different stories abound these days: protests are attributed to the ambitions of Bosniaks to form a united state without entities, which is why the citizens in the Serbian part of the country have been reluctant to take part in the protests. Others claim they have been initiated by certain politicians, and some go so far as to attribute them to the ambitions of the United States to create instability in the area. For those on the streets, it’s clear that the protests are the reflection of the difficult reality of the life in Bosnia-Herzegovina. After the war, the country has been led by the same people and parties, who, by the consensus of the people on the streets, are simply thieves and criminals.

Sociologists agree that the situation was bound to escalate. However, nobody knows what the outcome will be. Citizens have organized plenums to consider their next steps. Suggestions include the formation of expert governments, constituted by people not previously affiliated to existing political parties, and a change in laws enabling theft and corruption on every level of the society.

Although the future of the movement is still unsure, one thing is clear: the citizens of this country want their voices to be heard and are taking giant steps forward in forming something which is the ideal of most, yet so seldom put in practice: real democracy, in which the people rule the government, getting rid of the retrograde and inherently unjust structures of inequality once and for all.

Maida Salkanović was born in Bosnia-Herzegovina on the eve of the latest war. She has a B.A. from Occidental College in Psychology and German and Spanish Literature. She is currently working at the Center for Investigative Reporting in Sarajevo, Bosnia-Herzegovina.  She writes poetry and theater plays and translates to and from the following languages: Bosnian/Serbian/Croatian, English, and Spanish.

“The guards never stopped them. The guards were merciless. They did not even remove the bodies of children who died working in the fields.” Story of the Week (August 30), by Robert Earle.

"Then there were stars and he tried to breathe in the pulse of their light./ The flickering of stars is...