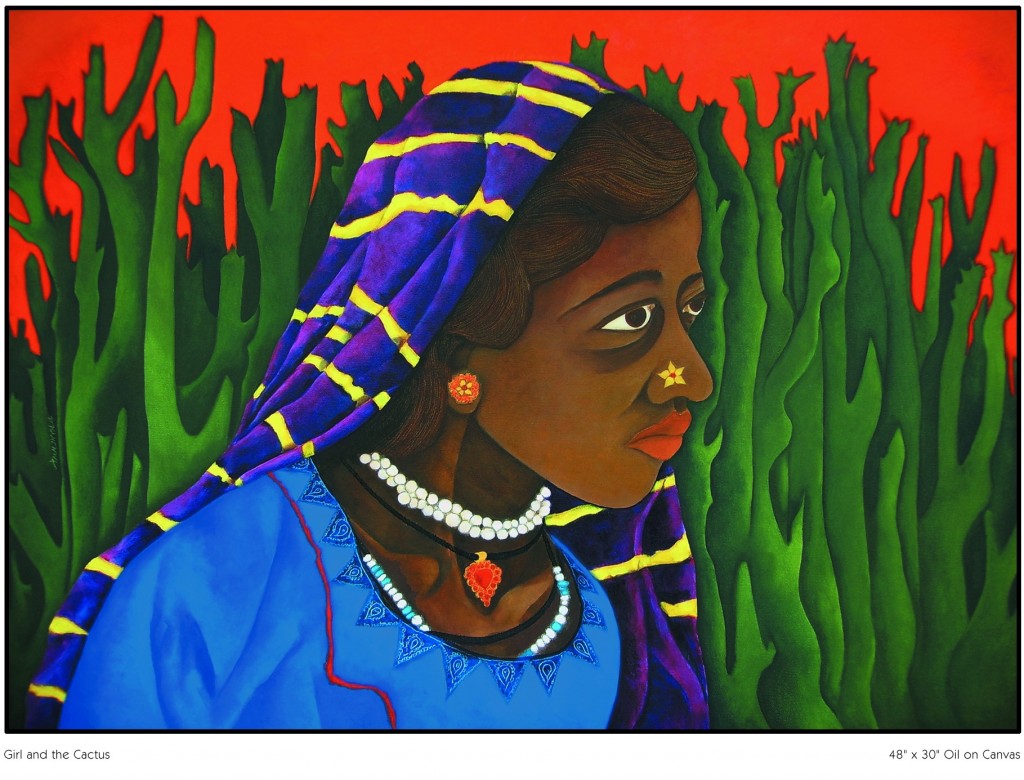 The bamboo smelled like smoke that night. It was the night the pig mother ate her litter. The piglets screamed like human babies, hoarse and shrill. The sow had not been underfed; perhaps she had just been bored.

Pragya had returned to the house gulping for air. Her mother and aunts were huddled around the dying flame of a candle, making momo for next day’s Ropain festival—a celebration of the planting season. The dumplings contained fleshy hunks of buffalo with minced cabbage or the creamy mash of potatoes. The women were whispering about the sow’s feast and how they would explain what had happened to the children the next day.

Her mother ran to the girl whose small hand was pressed against her chest, willing oxygen to fill the bubbles of her lungs.

“What did you see, Pragya?”her mother asked, the wrinkle between her eyebrows cavernous in its concern.

“Bhoot,”said her Pragya, between heaves, “ghost.”

Her mother was the only one who believed Pragya’s story. Her aunts and uncles and cousins and father, whom she called Buwa, laughed at her. She was twelve, after all, a silly child. She was not supposed to be out after dark, but her mother, whom she called Aama, talked her husband out of punishing the little girl.

“Whether or not you believe her, the girl suffered a fright. That’s punishment enough for going out in the dark,”said Aama.

It was the night the pig mother ate her litter. The piglets screamed like human babies, hoarse and shrill.
The family grew rice on a paddy field about ten miles from Kathmandu. The paddy had been in the Parajuli family for five generations and provided a comfortable life. There was always more than enough food and even meat once a week. Sometimes they’d order bison from Kathmandu which would arrive early Friday mornings on the back of a dusty Jeep. Other times Buwa would call for a child—Pragya, or one of her cousins—to help him in the shed. The child would hold down the quivering, soft body of an unlucky chicken as Buwa sawed away at the neck. They’d grill the breasts and legs outside, sucking spongy marrow from the bones. The blood-spattered aprons of Buwa the butcher and his young assistant drying on the clothesline made for sinister picnics.

Pragya and her cousins attended the grammar school in the village and would be permitted to go to a prominent high school in Kathmandu, when the time came, if they could pass their exams. Not all of her friends were afforded such a privilege.

“Pragya is rich as a queen! And twice as mean!”her friends would mock.

Pragya had been the strong kind, the kind with a sense of humor, the kind to laugh and tease back. But she had become withdrawn and dull in the days and weeks following her encounter with the bhoot. She stopped raising her hand to offer an answer in maths, her best subject. She stopped playing covert games of tic-tac-toe with Sanjita and Alina when Mr. Kushal was writing on the chalkboard.

She stopped playing football with her schoolmates during lunch. She would sit in silence by the side of the pitch, in a patch of dry dirt, twirling bits of grass between her calloused fingers. If a stray ball landed nearby, she awarded it not even a glance. Her classmates prodded and yelled, “Pragya, kick it back!”

The children were not aware what had happened, just that there had been a sudden change in their friend. They would trade information about hushed grown-up conversations they’d overheard: the furtive glance of a mother searching for her child who unknown to her was spying…crouched behind an open window leading into the kitchen…his mother’s face lit only by candlelight as she says to her husband in a voice hushed and light, “Something has happened to the Parajuli girl…Pragya…Thank God for our normal boy.”

Pragya was to work the paddy field with her family when she was able. This had once been a great joy for Pragya. She would invent songs and poems to pass the time:

But Pragya’s encounter had occurred the night before Kharif began, the second planting season. Her family desperately needed the little girl’s help in sowing their great expanse of rice. But she would sit disinterested in the mud.

Pragya would dunk her head under the murky filth of the paddy for lengths as long as a minute. She loved the blanket of mud—dark, free, expecting nothing. An aunt or cousin would finally grab her by the collar or hair and pull her back to daylight. Pragya would lick the warm silt from her lips and gaze up at her rescuer who, with the exception of her Buwa, would be too concerned to scold.

If he caught her, Buwa would slap her, leaving the flush of a handprint in Pragya’s mask of mud.

She did not cry.

She would not whimper.

He would grab her arm—his lengthy, thin fingers fitting neatly around the small circumference of her bicep—and drag her back to the roadside where there was no shade to speak of. Pragya would either burn in the torrid sun or wrinkle like an ancient woman in the unremitting rains until the workday was over.

Aama would cry, “Hurting her like that won’t help her!”

The Kharif planting season meant the monsoons would roll in, their hulking hauls of gray water dousing the fields and surrounding mountains, drenching the parched paddies with the moisture they craved. Pragya remained useless. Her eyes possessed a new vacancy her Aama could only compare to the empty, fortified stalk of bamboo.

“Is it me? The eternal foreigner afraid/ of even the sidewalks of this new country, even the/ sunlight bites.”
By Rakhshan Rizwan

Independent I: An Interview with Jennifer Reeder