Marvel, Marvel, Marvel. Marvel, Marvel, Marvel. It seems all I do lately is watch movies either made by Marvel Studios, or based on Marvel comic book characters, and thus it seems all I do is write reviews about those films. You would think by now I would be suffering from some sort of “Marvel movie fatigue”. Funny thing is, I’m not. I’m loving this era of film, which will probably come to be known as the Superhero Age of cinema. It’s really just crazy to see all these characters and stories that you grew up loving as a kid given such life and vibrant imagination on the screen. It’s like the movie industry striking gold after a long spell of digging out limestone in a mine thought empty, and now the rush is on. 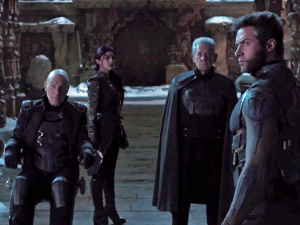 The latest haul from that gold mine is X-Men: Days of Future Past, a grand adaptation of one of the most renowned story arcs from the comics, written by the infamous Chris Claremont. All of the original cast comes back, along with the original director Bryan Singer, plus the cast of the latest prequel X-Men: First Class. This cavalcade of talent and excellent source material just goes to prove that sometimes Hollywood is capable of making good decisions. Despite never really answering some questions that were left hanging at the conclusion of the decidedly underwhelming X-Men: The Last Stand, which was helmed by Brett Ratner of Rush Hour fame, Days of Future Past picks up in the midst of some heavy duty action, and then never gives the audience a chance to ponder what happened in between.

Once again, Hugh Jackman is a core player in this one as Wolverine, a character that he seems to embody completely every time he takes on the role. As his character never seems to age, he is the constant that ties the two generations together, and gives the movie the seamless cohesion that it needs to pull off such a complex time-travel storyline. Continuing its tried and true humans versus mutants theme, which in turn continues to be a metaphor for struggles concerning human equality and acceptance, here we are treated to a story about attempting to reverse the apocalypse by preventing a murder, involving former enemies working together to complete a seemingly impossible task upon which their mutual survival depends. We are also given an interesting perspective on drug addiction, particularly heroin, which is a message so many people desperately need to hear. It’s provided by showing Professor Xavier, the world’s most powerful mutant, reduced to a shell of his former self, having given up his mutant ability (the thing that makes him special and unique) just so he can take his drugs and walk like everyone else.

Despite its heavy messages, which are only there if you look beneath the surface, this film is a joyous success. It’s everything that a summer movie should be: fun, exciting, and action-packed. And I must add how awesome it was to see Peter Dinklage in the role of Trask. This is a franchise that continues to thrive. Even in its low moments it is doing something right, and this is definitely not low. This film, under the guidance of Singer, brings X-Men back into contention for the title of best Marvel series. As always, stick around until after the credits.

“The starfish. I saw it on an English beach one frigid morning. Its five arms splitting me like five infinities…” Poem of the Week (August 11), by Arjun Rajendran.

Both Splendour and Darkness