Tom Cruise may not be the most stable person on the planet, having devoted much of his life to a religion developed by a science-fiction writer and all, but he still proves himself to be a juggernaut of talent when it comes to acting, consistently turning in solid, visceral performances that never feel overwrought or campy. One might wonder if his worship of L. Ron Hubbard has anything to do with his recent penchant toward working in science-fiction films. Whatever the motivation, at least Cruise has an apparent knack for picking quality scripts and talented directors to work with. 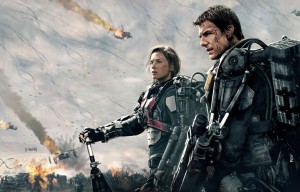 Edge of Tomorrow is no exception. A surprising amalgamation of iconic movies, including Groundhog Day, Aliens, Starship Troopers, and The Matrix, this film takes an outrageous plot device and turns it into a completely riveting life-or-death scenario that builds momentum like that bus in Speed: if it slows down, it will explode. The reason it succeeds is that everyone is happy to go along for the ride. Doug Liman is a director who is no stranger to action, having been propelled to fame with The Bourne Identity, and his finesse for crafting action sequences has only improved over the years. Some of the moments in this one will have you sweating and clenching your teeth.

There are some very interesting things to consider during the course of this film’s progression, and some are a little harder to swallow than others. For instance, just because one character relives the same day over and over yet retains his memories, that doesn’t mean that all the other characters will always accept and interact with him as though they have already shared countless experiences together. Despite Cage (Cruise) spending the same day with Rita (Emily Blunt) again and again, for Rita it always remains the first time she has ever met Cage. However, it becomes harder for the audience to remember that, and it was apparently hard for Emily Blunt to remember to act that way, as their relationship seems to progress at an accelerated rate, which is only credible when you consider Cage’s perspective on it. This issue never goes so far as to completely stretch the bounds of believability however, and that is a testament to the editing and the direction of the film.

Another element is the film’s paradoxical approach to the concept of fate. Bill Paxton is excellent as Master Sergeant Farell and one of his key lines deals with his view of fate, about how he doesn’t believe in it because it ruins the thrill of battle. And yet, the scenario that has Cage pitted to replay the same day over and over until he finds a way to win seems an awful lot like a fated outcome to me. But there are some unexpected twists that may or may not reinforce Master Sergeant Farell’s stance on fate, and it’s those twists that keep the audience on their toes throughout the movie.

Overall, while perhaps not the most original in its ideas, Edge of Tomorrow is an excellent science-fiction blockbuster which succeeds through great storytelling, acting, and direction. I highly recommend it to anyone in need of an adrenaline rush this summer.

A full overview of The Missing Slate's 2014 Poetry World Cup along with links to live matches.