“She is neither one nor two. Rigorously speaking, she cannot be identified either as one person, or as two. She resists all adequate definition. Further, she has no ‘proper’ name.”

Despite Under The Skin largely centering around Scarlett Johansson’s Laura, the first figure seen on screen following the opening credits is a man. This man rides a motorcycle and retrieves a woman’s body from the darkness of a roadside ditch. 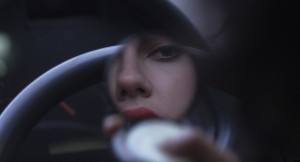 This sequence is crucial in establishing the framework through which one reads Laura’s actions. This man, particularly, and several other motorcycle-riding lads, at moments, function as monitors for Laura’s activities. The role these men play is never explicated, but one cannot escape the sense that a hierarchy exists and that Laura functions within it. Her predatory actions are not undertaken with an aleatory self-determination, but toward a more ambiguous end. The contingency of Laura’s agency is similarly echoed when one makes note of how she travels — in a van, often shown in a two-shot with an empty passenger seat that evokes her incompleteness — in comparison with the liberatory autonomy afforded an individual by a motorcycle.

Immediately before the film’s title appears — following a stunning sequence in which light is introduced into darkness and pulls shapes at once ocular and coital into being — the audience is shown a close-up of an eye. An iris, particularly. The object of the film that follows, then, must be, to some degree, seeing. The gaze. Given this fact, the nature of Laura’s predatory methodology, and the sense that she is in some way beholden to, or monitored by, the motorcycle figure, the film readily loans itself to a reading that posits its object, not only of seeing, but as the manner in/through which women’s sexuality is mobilised by a larger, less visible, network of male power.

Through this lens it seems entirely appropriate that immediately after taking the clothes from the woman retrieved from the ditch, Laura visits a shopping mall, the very temple of commodified and capitalised female sexuality. In a few quick shots, Glazer implicates a whole culture of beauty in a gesture of performance contingent on the mortification of othered women that is not radically different from the one that Laura enacts. The film’s subsequent explorations of desire and connection, or a lack/pursuit thereof, must be seen as submerged within this context. Crucial to this point is that Laura’s performance of an instrumentalised sexuality alienates her from an understanding of, or connection to, herself prior to any venture toward connecting to another. Indeed, under the hegemonic power that she works on the behest of, any chance for connection/understanding of the self is indefinitely deferred.

“While her body finds itself thus eroticized, and called to a double movement of exhibition and of chaste retreat in order to stimulate the drives of the “subject,” her sexual organ represents the horror of nothing to see.”

Seen in opposition to these early urban settings of alienation, the film’s correlation of Laura’s attempts to connect with a partner and herself with a more rural/natural setting could be problematic. The naïveté of aligning self-knowledge with a pastoral “natural” setting, in binary opposition to an urban unnatural ignorance, is somewhat destabilised as the film progresses, however. An intimate moment with a partner is interrupted by Laura’s need to examine herself, to look toward her lack. This moment is further compounded by the film’s final act of violence. In one act, the film inverts the superficial dynamic of previous sexual encounters, revealing their actual nature by showing them extended to their limit.

It is only when a man encounters Laura’s true nature that he is made aware of the implicit objectification and othering enacted by his desire. The horror resulting from this revelation stems less from any quality possessed by Laura than from the man encountering the violence of his desire made explicit, physical. Faced with this embodiment of his violence, man is compelled to erase the evidence of his objectifying activity rather than reckon with the implications it carries for his conception of his own moral and psychological composition. Before his return, however, Glazer presents another striking image of the effects of male violence. Laura is shown kneeling in the snow, her crying face in her hands looking up at the relatively blank, black visage of her actual self. Again, in an explicit and physical manner, the alienating effects of male violence are shown; Laura is alienated from herself, the disconnection between her perception of herself and her actuality manifested in her gaze back into her own face. The film’s closing shot, of slowly falling snow, renders a trite metaphor for individuality — that “every snowflake is unique” — instead as a weighty representation of the innumerable instances of male violence against women: all at once situationally unique and, simultaneously, of a similar quality and ceaselessly accumulating.

By positing Laura and the motorcycle men as aliens the film is able to provide itself a measure of distance from which it may launch its critiques. As aliens disguised as humans, these characters function as a mirror for social arrangements and institutions. That the film’s power dynamics are what they are is not accidental. External to the narrative of the film, Under The Skin presents an interesting analysis of Johansson’s career, moving through the film world with an autonomy that is largely contingent on her desirability. This reading, both of the film and Johansson, complicates matters beyond one which reductively and conservatively stops with positioning the narrative as a story of a “woman” as autonomous predator. From its outset Under The Skin presents itself as something more complicated and ambiguously allegorical.

Glazer’s direction puts forward shots and sequences that are frequently jaw-droppingly sublime; the film is comprised by beautifully composed images, perfectly framed, and imaginatively executed. These images are complemented perfectly by Mica Levi’s outstanding score. It is, however, the critical constellation arrayed by the film’s lines of critique/interrogation that complicate what could easily, with less rigorous conception/construction/vision, be something like the aesthete’s Species.

“There remains, however, the condition of underdevelopment arising from women’s submission by and to a culture that oppresses them, uses them, makes of them a medium of exchange, with very little profit to them.”[1]

“Deborah Rancoff was never beautiful, but her drowned body was.” Story of the Week (April 18), by Madeleine Lee.