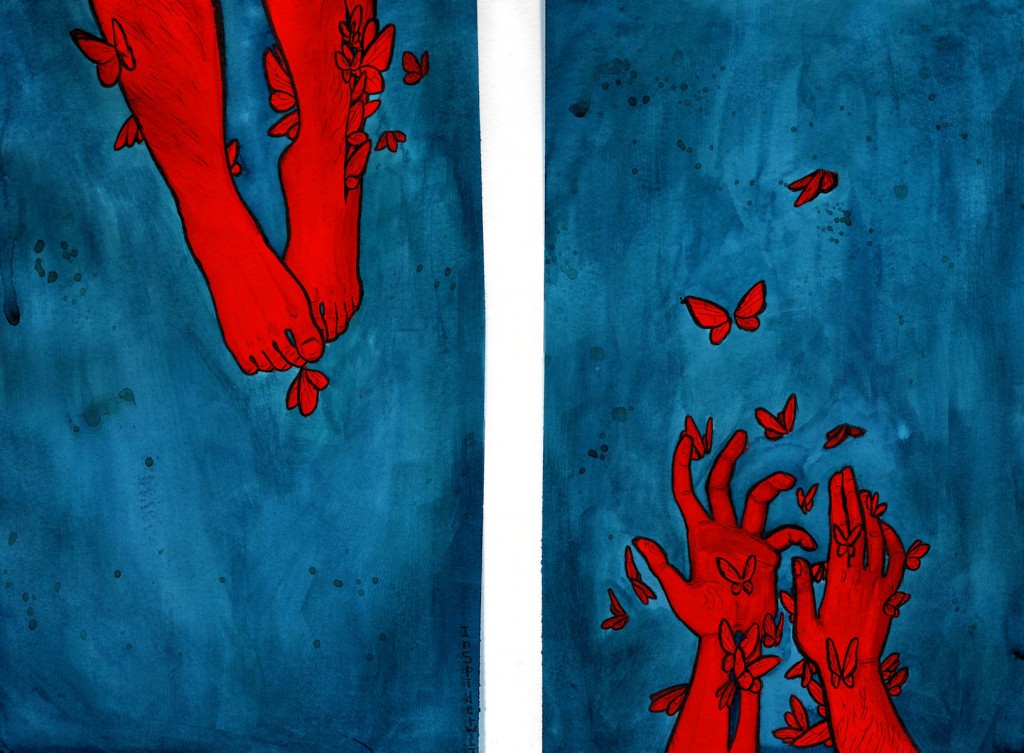 The sun rises and I suddenly wish I were somebody who could hurl a whiskey bottle against a wall. I hate noise and mess, and I don’t know what I’d do if I hurt somebody. I live in fear of hurting somebody, every day. Some green glass fragment would bounce off a wall and take somebody’s inner ear and there they’d be, spinning around and around, no more balance, and they’d be yelling at me “Caitlin, I’ll never feel safe holding my baby in my arms and it’s all your fault”.

I never will, I say to my knees, around which I’ve wrapped my pale skinny arms, pebbling in the early chill. I feel like my skin is too thin to hold me in it, I feel like I don’t weigh enough to stay on Earth. I smoke, constantly.

The sun rises and mostly I wish I wasn’t watching it again. If I could sleep, I wouldn’t miss it, I swear. I swear to god, I wouldn’t ever call a sunset beautiful again if I could just sleep.

I don’t think anyone in my generation sleeps. If I don’t see the sunrise, just from the sheer force of coffee ratting in my veins, like, at least once a week I feel something missing. Sometimes coffee. Sometimes adrenaline, sometimes anxiety.
I think I look to god like an upside down lilac, black hair, black as the dirt, and pale skin, and smoke sailing off me into god’s face, into the wild blueing sky. Ridiculous.

But I haven’t chewed my nails in several hours and in an hour or so I can call my mom so I can barely breathe but I think I’m going to be alright.

Becky
I don’t think anyone in my generation sleeps. If I don’t see the sunrise, just from the sheer force of coffee ratting in my veins, like, at least once a week I feel something missing. Sometimes coffee. Sometimes adrenaline, sometimes anxiety.

Texts from the blog, emails about issues, awareness drives for divestment and fair trade, my phone is on permanent vibrate. And so am I.

I got tired today. Hasn’t happened in a while. Maybe more than tired.

Honestly, I know it’s weird, but for the first time in my life I think maybe like… old fishermen had it right. Like not even selling fish to anybody, but just feeding yourself and adding to the cycle of people who can eat. And the people who eat from the place where something came from, not magically dropped into our stores like by a helicopter that came from another planet.

When I think that, I feel like I’m standing on the edge of some canyon, looking down.

Maybe hungry people could feed themselves, if we let them by not channeling every the earth grows only in the direction of places where they can be bought, like it’s a fucking crime for there to be an apple tree no one owns once in a while.. Maybe everyone would feel better worrying about where their next meal comes from, after all, but not worrying because you just have to go get it. Small diets, but plenty. Dogs make do with dog food every day. Right?

I know I’m one of those people. But I don’t want to be near the Earth in some fucking hippy way. I just want to be on the Earth, because it feels like I’m in fucking outer space because food just shows up in stores and highways just carve through space and planes burn the shit out of maps, and….

You know what it feels like? Forget the canyon. It feels like there’s an alternative. Not like the stuff you can think of to do, canned alternatives, slight variations in the theme of bullshit, vote for this patriarchal bullshit deriving power from the status quo, occasionally appropriating a pretend populism when useful, buy this product that’s “natural” and “organic” and oh, yeah, secretly owned by the same six corporations who own everything else, pretending to compete with themselves so they don’t have to let ANY market share go anywhere else…like a real alternative. Wouldn’t that be something?

Like I could live, catching and eating fish, or selling fish directly to people who will take it home and eat it, from the ocean to me, to them, like I’m attached to the surface of this ball moving through space not floating above it, eating Australian fruit and South American rice like there weren’t even any goddamn oceans. Like there was an expressway from Australia to the freezer section of the supermarket.

Fuck that one power line that’s always your way so you can’t even close your eyes and imagine you’re looking at a planet that was even fucking there 100 years ago. Fuck.

Nobody sleeps. What’s there to sleep about?

Serious question: Do you think we surrender life gladly?

I mean we all fight, for as long as we can, but do you think if it’s not sudden, if you have a whole moment to realize you’ve lost, do you think you’re glad?

I don’t think of me dead, I think of my phone dead. I’m 100% serious. And they should bury the goddamn phone, too, and not me, let me be among the goddamn stars and don’t even pretend this fucking thing I’m haunting, this body, is who I was for even one minute, I’m taller than the sky.

My phone is buzzing. This time it’s Caitlin. Fucking finally.

Andrew TobolowskyfictionStory of the Week

“I take Putin’s soul by the hand and seat him in my little red wagon, and I start to pull him back to my house.” Story of the Week (July 10), by Ambika Thompson.

Private Theatre: Rise of the Planet of the Apes

Senior film critic Tom Nixon revisits 'Rise of the Planet of the Apes' ahead of its imminent and promising sequel.