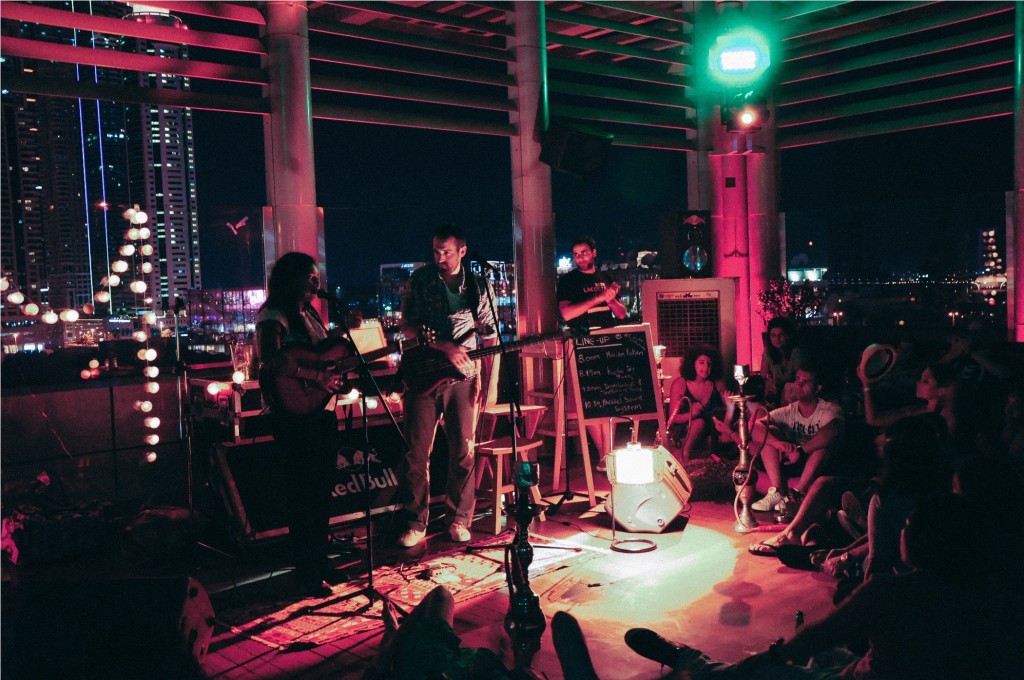 In a cosmopolitan metropolis like Dubai, a thriving business and cultural hub, live music is a concept often restricted to massive, multinational events. International artists prefer Dubai as a pit stop on their global tours, headlining large commercial concerts on which Asian fans spend hundreds of dirhams to hear music already being played on radio stations around the clock.

In an environment like this, creative outlets for local musicians can be rare opportunities to come by. However, Dubai’s acoustic music scene tells a different story now, thanks to a non-profit initiative called Freshly Ground Sounds, the brainchild of Ismat “Izzy” Abidi. A lawyer by day, Izzy began the initiative with the intention of creating “a community and platform for spreading independent acoustic sounds across unassuming venues in the U.A.E.”

In less than a year since its debut, it has unearthed local talents who come from all walks of life, be it university or high school students, or doctors and designers. Freshly Ground Sounds has also built and nurtured a community of music-aficionados that share a desire for a platform where they can both play and enjoy independent music.

Over croissants and coffee, Izzy talks to The Missing Slate’s Gimel Samera about the idea behind Freshly Ground Sounds, the U.A.E.’s acoustic music culture, her own Dubai-based alt-folk-pop band, and how a music-loving community plays an integral role in the journey.

So to start off, what is Freshly Ground Sounds all about? When and how did it start?

I grew up in the U.A.E (in Abu Dhabi to be precise) and moved to London for university. In my twenties, I travelled back and forth for work. It was April of last year that I finally moved back for the sixth time. When I was in London, I was an active part of the lo-fi independent music scene – the bookshop/coffee shop acoustic culture. I play the harmonica and the guitar, so jamming with other musicians was what I did part-time, because I had a full-time job which I liked.

It’s not just about one musician. It’s about showcasing what the U.A.E has to offer.
But when I came back here, I was very conscious that in the U.A.E., you don’t have that side of the music scene at all. So I approached a few different cafes that turned the idea down, saying there was no market for it here. But then I struck a chord with The Roseleaf Café and basically, I started playing there for free, which eventually turned into an idea. I thought, “Well, this is great that I can play, but I want it to be a community. There have to be many other musicians like me out there. Where are they?”

It was early November or late October that I thought of Freshly Ground Sounds and I approached The Magazine Shop in DIFC (Dubai International Financial Centre). It was open and the weather was great so I said, “On November 27th,” – which was the night Dubai won the Expo actually – “can we just get some musicians together and play?” I started a Facebook page for the event. We got a few emails in, like eight or nine, from interested musicians. Some notable names were Craig Perry, Floetics, Josh Monteath. And that’s how Freshly Ground Sounds started, on November 27th.

Six months on, it’s grown to over 90 musicians, over 12 venues, gigs in Abu Dhabi and Dubai, an EP, which is a compilation of independent music from the U.A.E. It’s now available in New York and London, and you can also listen to it online. We also have radio airplay, national press coverage, international media coverage and that’s what it’s become.

I was ecstatic when I first heard of Freshly Ground Sounds, and to use a cliché, it’s like a dream come true for a lot of people here. Do you remember what it was like hosting your first event? What was going through your mind while it was happening?

I’m a musician but I’m not a sound engineer. I grew up with a guy called Tareq Khorsheed, who’s now my partner in Freshly Ground Sounds. So I said, “Tareq, we’re doing this gig. Do you want to come and help me out?” He said, “Sure.” He came to the first event and had the sound sorted out. He makes every event sound great, catering to each musician’s style. We wanted to keep it simple, like an open-mic style. Artists would bring in their own instruments and plug them into our kit so that it’d be fast and it would flow smoothly. We had a line-up. We had a blackboard. The blackboard’s become our trademark now. It goes everywhere with us.

So I was very, very nervous for the first event. Were any of the musicians going to show up? It was the [day after Dubai landed the] Expo, and there was traffic and I wasn’t sure if the acts were going to be good. It’s a gamble, you know, when you’re putting on an event like this. But around forty/fifty people turned up and the response was, “Wow, is there more of this? Wow, that was amazing!” There was so much positive response.

How many musicians do you have listed and how are they selected? Are they all based in the Emirates?

We’ve got 92 musicians so far, coming from Abu Dhabi, Dubai, Bahrain and one from Saudi Arabia. It’s different the way we do it now. We’ve had seven events. When we first started, it was whoever signed up, because we didn’t have enough sign-ups. For the second event, we got triple the amount of sign-ups but we had limited slots. Two were given to people who we knew were good and had already played with us before. We also gave new bands a chance, like Physical Graffiti, who have played a lot as a result of the FGS platform, and they’ve been able to build their fan base considerably. Now, they’re a favorite local band.

One thing that we don’t have is an audition or screening process. We literally just go for it and that’s kind of the beauty of it. We always make sure that there’s a mix of people we know that are good and then introduce new bands, or solo female and male artists. Basically, we make sure there’s a variety.

Where do you usually host events?

They take place outdoors or at non-hotel venues. I speak to the venue owners and make sure that they know of our specific value and style, so if they get that, then I’m up for working with them. We’ve got a really good relationship with The Magazine Shop, The Archive, and The Roseleaf Café in Dubai.

The characters in ‘180 Sunsets’ don’t belong in any way to this place called Zahraniyya where they live. They came to this place, twenty or so miles from Lebanon’s capital city Beirut, fleeing their areas of origin, because of the war, or the wars, and here they are, in houses new to them, houses being built there. All the while, they are building resentment and hatred toward each other as if, in their turn, they are getting ready for their own coming war.

Reinventing the Reel: Dawn of the Planet of the Apes

Film critic Jay Sizemore on the latest instalment of the 'Planet of the Apes' franchise.