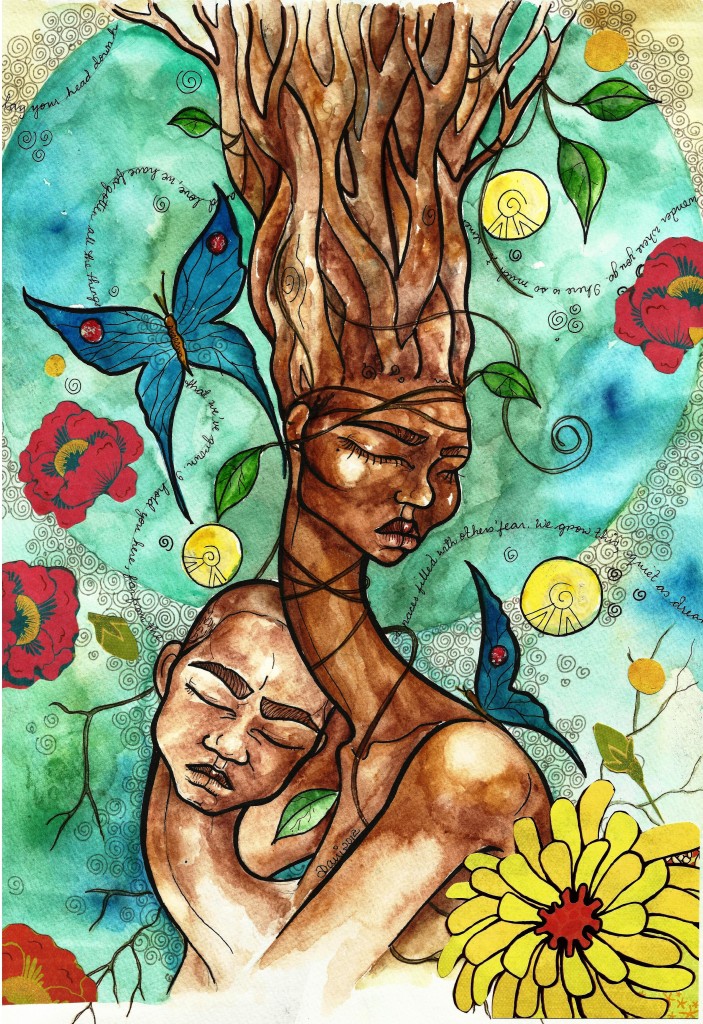 How did she not bewitch you with the dancing in her golden eyes?
Dewy and trusting — like when she fell asleep once, under that baobab tree, to the music from an African rainfall?

Remember, her cheeks blushed like jeweled pomegranate drops?
Her lips, the shape of a sticky caramel ring, sweet, became heavy.
Then, they released a keening as heart-wrenching as the echo that swirled in the Balkan mountains of her birth home.
But softly.
No one must hear.

How could you not know as she walked through the door?
Knee length socks askew, schoolbag as heavy as a whole planet
hanging off her thin shoulder?
The eyes, the golden eyes are not the same anymore.

Dead now like those choked screams from soldiers alive after a battle.
While their brothers, baby sisters, fathers lie as they are, their voices stifled.
Their names written with the blood of their mothers. Forever.
Her eyes are those of a crone, of a refugee surrounded by high walls. Her country is a twirling mad canvas painted with a broken brush, and now she has a knowing of that which she should never ever have known.

How come then?
Why is she now bent over like a jasmine bulb scorched by that merciless sun?
Where is her caramel smile — or the golden sparkle in her old woman’s eyes?
Why did you not love her, afterwards?

She is more one thing than another.

Zvezdana Rashkovich is an American author born in former Yugoslavia and raised in the Sudan. She is a mother of four, speaks fluent Arabic, Serbian and Croatian and lives in Dubai. Some of her work can be found or is forthcoming in Inkapture (UK), When Women Waken and I am Subject anthologies, Apocrypha and Abstractions, New World Writing, The Journal Of MicroLiterature, Litro (UK), and others.

“She hears the crowing of birds outside,/ her neighbour cussing at the colony chowkidar,/ the petroleum cough of the retired colonel’s jeep…” Poem of the Week (October 29), by Rakhshan Rizwan.

Of Turrets and Peacocks

"One rarely hears rumors about whores and bawds, one hears them about respectable women, spread with the intention of causing...