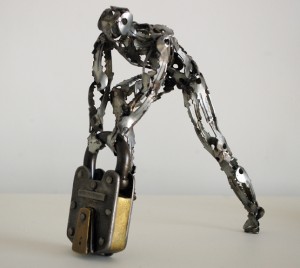 That’s what she gone and told me before running off into the night like a bat out of hell. “Keep it locked, and don’t open it.”

A lot of good advice that was, considering I don’t got no key. Plus, who did she think she was anyway, waking a man at three in the morning?

To be fair, I supposed she probably didn’t see me at first. It was a cold night and I was wrapped up in all them newspapers tighter than a rat bound up in a boa snake. But I was off in the alley and everything, clearly out of the way. I was just minding my own business, and trying to get a good nap in. Then she goes and wakes me, shoves this thing in my gut—tells me something that ain’t no use to me—and then goes sprinting back out on to the road as if she got a whole troop of New York’s finest trailing at her heels or something.

Next morning, I tried to open it.

But old Connelly at the pawn shop said if it ain’t gonna open, it ain’t worth a dime. I tried to barter with him but, in the end, I left the shop in a huff, having said a few choice words and showing old Connelly my favorite finger.

You’d have thought it wouldn’t have been all that hard to open, even without a key, but it was stuck like glue. It wasn’t all that big, just a box, kind of fancy-like, with all them little circles etched in it. I thought it might be worth something, at least a lite beer. But old Connelly at the pawn shop said if it ain’t gonna open, it ain’t worth a dime. I tried to barter with him but, in the end, I left the shop in a huff, having said a few choice words and showing old Connelly my favorite finger.

I don’t know why I didn’t end up just chucking the thing then and there. It wasn’t no use to me. But I kept thinking Miss “flight-in-the-night” would end up coming back for it and if she was happy I hadn’t ended up opening it—only because I couldn’t—then maybe she’d give this old bum a reward. I’d been itching for a Big Mac for a while.

I don’t keep track of time—no use to it. So I ain’t quite sure when it was that the guy in the suit came looking for the box. All I know is he must have had some sort of tracking doohickey to have found me. It was colder than my rear end sitting on an iceberg outside, so me and some other fellas headed down into the train tunnels, hoping to stay a little warmer. Them tunnels go on for miles, so you ain’t never gonna find what you’re looking for, unless you know where to look.

I had my box securely under my rear—on account ‘o it makes for a good seat when the ground is all froze up. All the other fellas were huddled around me by the fire barrel, when my buddy Rob came running to tell us that it looked like the boys in blue was coming our way.

"Vivian, maybe the secret was in your name,/a twisted code of semantics. Like the rest of us,/ you were the...