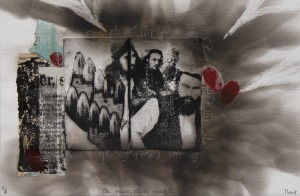 Translated from Portuguese by Annie McDermott

Four black guys and a girl stopped outside the building.

The first thing the doorman said was: “Jesus!”. The second: “What do you want?” or “Which apartment?”. Or “Haven’t they fixed the service elevator yet?”

Caroline explained: “A documentary.” Eh? What’s one of those when it’s at home? Normally people just show their IDs and that’s that – what are these kids playing at?

Filming? Criminals do that before they kidnap someone. Keep track of all the comings and goings, the daily routine, what time the victim leaves for work in the morning. And in this building there are bankers, doctors, lawyers. No building manager, though. The building manager’s never here.

“Where are you from?”

“The Morro do Pavão.” Favela.

“We want to film a feature-length documentary here.”

People are always coming up to where we live and making films about us. We open our doors, show them our cooking pots, all that crap.

A feature-length robbery more like – shoot some people, knife a few others, slit some old ladies’ throats – these kids must be armed to the teeth. What did I tell you? I’m out of here. Doormen are human too, aren’t they? Caroline said: “The idea is to go into an apartment unannounced and interview whoever lives there, and film the whole thing.”

The doorman: “Go into an apartment?”

Inside the doorman’s head: “I’m fucked.”

I have to admit, it was all my idea. People are always coming up to where we live and making films about us. We open our doors, show them our cooking pots, all that crap.

So what was my idea? Well, I got hold of a third-hand camera and we practised with it for a few days. Exclusive footage, that’s what we were after; gleaned from the lives of the middle class.

Caroline: “Come on, love, please. . . ” She showed him the microphone, waved it around a bit.

Great, so I’m about to get hit over the head with a microphone? We’d borrowed it from a macumba priest who was helping us out with the project.

The doorman rang the bell for apartments 101, 102, 108. Pressing every button in sight. I’m being attacked, surrounded – call the police, anything!

The whole point was to turn up without telling anyone beforehand. Keep it spontaneous, you know? Natural. The resident talks about what life’s like with cars in the garage, a salary, a swimming pool, a computer with internet. Fame and fortune. The Brasilia Film Festival. The Gramado Film Festival. Our film being shown on big screens in schools. In apartment blocks just like this one.

We don’t only listen to samba. We don’t only listen to bullets. This doorman’s acting like he’s not even black, the way he’s keeping us shut outside. The hill we live on is just over there, open twenty-four-seven, and we welcome people with our arms thrown wide. The slimy bastards come strolling in, poking around in our past, and we open up like little birds. Tell our stories like parrots. We sing, we roll over. We offer them our coca-cola.

But thanks to this fucking doorman, our film will never even get made. Shit. I mean, it’s Sunday today. We just wanted to see how these families have their Sunday lunch. Whether they do it the way we do. A plate, some stew, a napkin. Shit, there’s no need to call the building manager – just listen for a second. We’re going to take the camera out of its case. We’ll show you we don’t mean any harm, we’re only trying to get on in the world. Make films. Cinema. Look at Fernanda Montenegro, she practically won an Oscar.

Then he warned us: “I’m calling the police.”

No-one likes the police. This isn’t what we want to hear. We’ve all sacrificed a shitload for this project: Nicholson stopped selling churros, Caroline gave up the nightclub. I left my wife, my dog, my son. Not a feature-length film then, just a short. Poor people have to take what they can get. Start filming. What? I gave the order again: start filming.

So we did. We recorded everything. Residents peering down from their balconies. The traffic. The police sirens. Police sirens? Of course. All films have to have police sirens. And gunfire – plenty of gunfire.

Shots: Johnattan jumping over the wrought iron gate. The doorman locking himself inside his booth. Fear. All kinds of people turned up. And this wasn’t the way we’d planned it at all: we had to improvise.

It’s fine though, whatever.

We can always edit things out later on.

Poet of the Month: Jarkko Tontti

"In general, creative writing needs rules and constraints, ways to more or less artificially limit the unlimited options available to...