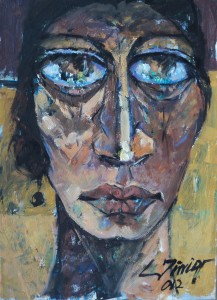 We begin with a girl and end with an old woman. The challenge will be to make her a story, although, in truth, we have our doubts about stories, which miss so many interesting details because they tend not to be recursive, don’t double back to pick up things that fell out of their pockets and ought to be known, things we would pause to recount parenthetically in conversations, or as footnotes, or as surprise additions to the dramatis personae who somehow don’t “fit.” This could be the strength of novels and deficiency of short stories. But who has time for novels anymore? Two thousand words and done. Subway ride over. Bath cold. Battery running low.

Laura Hudson Chatterjee is seventeen, American, raised in New York, her father a Bengali-born and Oxford-trained proctologist, her mother a descendent of Henry Hudson the explorer, and her brother the one who had the controversial and still unique sex change in order to banish the testosterone that was feeding his life threatening prostate cancer. Henry Hudson Chatterjee was his name (we’ll get to why “was” instead of “is.”) He survived as Henrietta, a plumpish savant who got jobs in politics and museums through connections and then romantically partnered with the ex-wife of one of his powerful political bosses. They took their lesbianism seriously. It was like pouring half a glass of water into another half a glass of water. Very full.

Laura is a girl who always seems to be looking over her shoulder, not in fear but in expectation. She’s going to be on the tall side like her father. But then he dies when she is eighteen, so this is a fact about Laura. Fatherlessness opens things up for many girls. In her case there are a number of volunteer substitutes, all of whom she manages to elude because she dislikes the very idea of a father. Hers was imperious, stiff, rude, and not a sexist with a heart of gold. At his funeral the loneliness and vulnerability she feels is having lost the opportunity to look forward to him dying some day. “People can be shits,” he told her once, having taken a drop too many, “and I know I’m one of them because I didn’t have the courage to be myself. If I were you, I’d consider dropping Chatterjee as a last name and go with Hudson, Laura Hudson. It sounds better, don’t you think? I mean here in New York. If you went to Calcutta, you’d never survive. People would expect you to know something about the Chatterjees, and you wouldn’t know a thing. Here, okay, I know it’s fashionable to be half from somewhere else, but not there, and even here it gets old fast. Don’t make up some story about your ancestors and peddle it around, how they haunt and speak to you, and you must make a pilgrimage. Rubbish. That’s what I like about V.S. Naipaul, he gets the rubbish right. Read him? No, I didn’t suppose so.”

Laura is a girl who always seems to be looking over her shoulder, not in fear but in expectation.

She goes to Cornell, unlike the rest of the family who attend Columbia/Barnard or Oxford, and already is so attracted to birds that she becomes an ornithologist. Birds have come into her life on Block Island, where she has one set of friends. Another set of friends belongs to the Athletic Club. And there are school friends and rogue intruders. One is supposedly an Australian trucker taking a break in the States. She is convinced he is “the one” until she goes with a friend to Waterville, Maine one summer and meets her goofy, charming brother. His naked body when he is doing pull-ups in the barn turns her inside out. She sheds her clothes and grabs the beam beside him. When they drop down, she gives him her virginity. The horses understand. They’ve seen him pull this one before.

No matter. Her body, ultimately five nine, broad shouldered, slender breasted, capped by a healthy grin of a smile and thick brown hair, attracts others. But she values her inquisitive, retentive mind more than her looks and is disappointed when she realizes men generally do not like women who expect interesting things of them.

We know, by the time she is twenty-four, that Laura may never marry. We know she has a cabin in the Adirondacks and a beach house she can freely use on Block Island and that there are relatively few interesting birds in New York City, and the ones there are have largely been “taken,” as it were. They’re documentary stars. They think they’re human. The five borough African grey parrot count already has been established. It’s 2100. They live in lofts, condos, grocery stores and car repair garages.

Inevitably Laura is going to become physically tough from hiking and climbing, and she is going to be permanently sun- and wind-burnished and she adapts well to spells of solitude. Research grants and a part-time teaching job in a college close to the lower Connecticut River estuary keep her going. She becomes an excellent painter of birds. Her work sells. She is twenty-nine now, and there is a flurry about her work which is a distinctive mixture of the naturalistic and the expressive.

But then she does marry. This is a mistake from the first week. Of all people, Laura makes him feel trapped. Wandering, self-directed Laura.

Three years later she has a baby named Zack and no husband. Carries Zack everywhere as long as she can and eats sweet potatoes, beans, pasta, and eggs to save money while making the decision to raise him in the Adirondacks, although putting up with elementary school in the Adirondacks is grim. She compensates by working hard with him on reading and drawing and starting him on the curriculum of an undergraduate naturalist at age four.

It is not a nonissue that she never marries again. Zack comes first, but there are men she has learned how to calibrate to her needs and expectations. Not looking over her shoulder anymore. Looking straight ahead.

When Zack takes to hunting, it’s a shock. He shoots squirrels, fox, deer, and bear, eschewing birds in deference to her, but no man ever disappoints Laura more than Zack, not even her father. He’s deliberately obtuse around her. Plays dumber the smarter he becomes. Once he has a truck, he’s impossible to keep watch over. Army bound. Killed in Afghanistan. Thereafter hunting season blasts in the woods twist in her bones like wood screws. He is buried in a place only she knows, having dug the grave herself.

“I did notice, though, that the best oranges/ came from the most withered tree”
Weekend poem, by Jeffrey D. Boldt

"I will not miss the bird-blue door they broke in the middle of the night// for a laugh. I will...