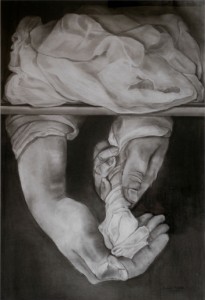 Just a minute ago, I started on my way out again to find a washtub. Amazing, isn’t it? We’ve been living here now for more than half a year, and I still haven’t gotten used to the fact that we have our own washing machine. As if that should be so hard to get into my noggin—that we actually have a large, splendid laundry room with both a rotary iron and a fully automatic washing machine, and a freezer, all of it brand new. And closets, tons of closets. Many of them still empty though, but not for long. Everyone knows you can never have too many closets.

It’s the same with the rest of the house. Take the kitchen, for example: I don’t know how many times a day I catch myself reaching for the wrong drawers. Or take out the whisk even though the hand mixer is hanging right there on the wall, literally right in front of my eyes. Or bend down to take milk out of the refrigerator, though I should know by now that it’s sitting in the top of the door. Those trivial things, that’s all it really is. You’d think I had too much time on my hands to notice that kind of thing. It’s really not because I’m dissatisfied. Good Lord, no. I’ve always had a lousy sense of direction—that’s probably the reason.

Anyway, the grass is beginning to come up now. Gradually. It’s still mostly just ground you can see. And what will someday be fruit trees: some naked sticks here and there, with a little white strip around them flapping in the breeze. Apples, pears, plums. Peaches. An almond tree. God only knows if that kind of tree can really grow here. Johannes had no doubts. Of course it could, he said. I had no idea that he knew anything about plants and gardening and that kind of thing. He was all fired up about the garden, toiling away out there the first few weeks. His father was also down here some weekends to help. Now everything is ready, what will become a perennial bed and a vegetable garden. Waiting only for spring and summer. We’ve also planted a larch hedge. We were on our knees out there, Johannes and I, such a beautiful fall day with high, clear skies, each of us planting from our own end until we met in the middle. Of course, it doesn’t look like much now; only some small sprouts sticking up, shivering along the sidewalk. It will take two or three years probably, but that’s the way it is. Nothing happens all at once.

Not many people outside today. No one at all, actually. The road is totally deserted, as it always is at this time of day. Everyone is at work, naturally. Just like Johannes. Just like most people. Just like I used to be. That is if I didn’t have evening or night watch. I really miss it a little sometimes. The feel of my white smock, my nurse’s pin with the red four-leaf clover. The days on the ward, never the same, never boring. The hustle and bustle, the responsibility. To be part of that great buzzing organism, working together to save lives, to make people healthy. No one had expected me to get an education. Neither my mother nor my father had any education beyond grade school, so they really didn’t think it was necessary for me, a girl. Maybe they thought I lacked the will or determination. But I did it. Even moved to Copenhagen. Certainly no one at home had imagined that. To most people on Mors, Copenhagen might just as well be part of Finland.

Still, you don’t want to say that about a child; a child is a blessing. Time will tell. I had a miscarriage the last time, so you have to be a realist. If you stop having unrealistic expectations in life, you won’t be disappointed.

And that she is. Her nose in the air and her small soft arms resting alongside her head. Her dolly and toy dog within reach, a crumpled picture book in the corner by the headboard. Good. What has it been—ten, fifteen minutes since I tucked her in? So, she’ll probably sleep for another hour or two.

Of course it’s a privilege not to have to work. Especially while Ida is little. And maybe we’ll have another at some point. We’ll see. We’ll cross that bridge when we come to it, as they say. Still, you don’t want to say that about a child; a child is a blessing. Time will tell. I had a miscarriage the last time, so you have to be a realist. If you stop having unrealistic expectations in life, you won’t be disappointed.

No, I definitely should not be complaining. On the contrary, with a small child to take care of and a big new house. The kitchen alone—come on!—at first I could barely find my way around it. But slowly I’ve gotten to know it. I’ve never had such a wonderful kitchen before. It’s almost too elegant. On Godthåbsvej, we only had that old, blue-painted kitchen, which was fine anyway. Still, we always had something to eat, really excellent food, if I do say so myself. Even when we had guests. Didn’t I manage to make both three- and four-course dinners for six to eight people in that kitchen? But still, it’s wonderful to have more counter space. And everything is new. Not to have to wipe off that old, scratched-up linoleum, without ever really seeing any difference. Here, everything is spotless and our own, right from the start.

It all happened so unexpectedly. Suddenly Johannes got this chief physician position in Næstved, and there was nothing else to do but give our landlord notice and find something down here, where neither of us has any family or knows anyone. Well, we will in time. I had no idea he had even applied for the position. That he wanted to leave Copenhagen University Hospital. He had never said anything about it. We were living pretty well on Godthåbsvej. I actually liked Copenhagen. Living in a large city, the nation’s capital—for me it was still a fairy tale. But then I hadn’t lived there most of my life, like Johannes. And a house is naturally not the same thing as an apartment. We were lucky that the original buyers suddenly backed out. They separated abruptly, right in the middle of the whole transaction. And of course it was great that Johannes got that position as chief physician. He had often joked that he planned on making chief physician before he turned 40, but even he never actually believed it. Sometimes I almost have to pinch myself in the arm to prove that it isn’t all just a dream. That the house is real, and that it really is me who lives here.

“Those who wait for the messiah, or write/ about God as though he exists are cooked.” Weekend poem, by Thomas Piekarski.

"You bend your head,/ offering up a scalp for my perusal,/ inviting some small sense of revelation/ in this act...