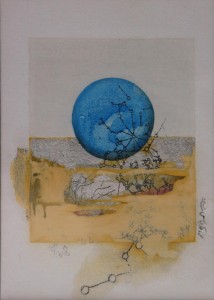 I have school tomorrow, so usually I’d be in bed by now, but it’s my first día de los muertos outside of Ojo de Agua and I’m surprised that everyone’s not celebrating the dead.

Grandfather takes off work at the train station tonight.

We spend all day making pan de muerto. We bake the sweet bread to look like a skull. I knead my two thumbs in the skull to make little eye-sockets. I carve little teeth with the tips of my finger nails. At midnight we will float the skulls down river and grandfather says it will drift all the way to Mom and Dad in the Gulf of Mexico.

I don’t see how it will get there, and if it does, then I don’t understand why we set out blankets and pillows for Mom and Dad in our house? But Grandfather says the bread is for their bones and the pillows are for their souls.

There are large pieces of dead wood on the sand like bodies waiting to be buried.
But I don’t mind, because we live on a 5th floor walk up and I can see the sun rise over New York City and set over America. So we live on the boarder between life and dreams. Grandfather says not to be sad, but it’s very difficult—with Mom and Dad sleeping beneath the Gulf of Mexico. So as we walk to the river, Grandfather makes me dance. I’m carrying the ofrendas—some sugar skulls in my hands. Grandfather carries mariposas, or butterflies. They are candles that ride atop winged boats we’ll set sail at midnight. I dance with the ofrendas and Grandfather salsas lifting the mariposas up and down as we reach the beach.

There are large pieces of dead wood on the sand like bodies waiting to be buried. Across the river are the tall buildings. The windows have lights on and off that look like the little teeth of skulls, as though the entire city is a sugar offering for the dead.

We put the mariposas and the ofrendas in the water and they float on top of the tide.

I can see the red lights of the Lackawanna Train station and they play in the water against the butterflies floating down the river like the thoughts of the dead.

Eliot Hudson is an author and singer songwriter. He’s earned two master’s degrees at the University of Edinburgh (Literature in Modernity; Creative Writing). His poems have been published in the collection ‘Garlic and Sapphire’, and in the online poetry journal, Cleaves. He’s been featured as a contributing writer for the Punxsutawney Spirit, and the travel journal, Exploration. Hudson also writes songs and performs under the stage name Hudson Underground throughout New York City. He’s played as far as Barcelona, London, Rome, Romania, Vietnam and performed at the Edinburgh Fringe Festival.

Eliot HudsonfictionStory of the Week

In Remembrance of the Slave: Part I of II

"The economies of Great Britain, the Netherlands, Portugal and France would not be what they are presently without the transatlantic...