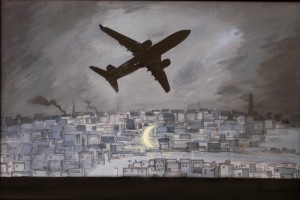 Aogu asked amid intermittent lip-buzzes, which he paused every time he ran out of breath but quickly resumed so the plane engines didn’t stall for too long. He couldn’t afford to crash; he was on an important mission. He plummeted into a nosedive as he gasped in rehearsed dramatisation, deftly pulling up at the last minute. His lips smacked together, pulsating and spouting a shower of spit-fire. Miki watched him guide his makeshift plane—a handful of crudely snapped twigs, bundled together with several red and orange rubber bands which had lost their elasticity, and larva-tunnelled dead leaves serving as its frail, wilted wings.

“Kuso kurae, Pearl Harbor!” The wooden plane swooped down with spirited gurgling. Falling stones—jagged ones not close enough to the sea to have been washed over and polished smooth—crashed onto Miki’s ship, flimsy sheets crumbling, paper losing to rock. She shielded her face and scowled amid booms and bangs. “Aogu-kun, stop spitting! It’s my turn to be the plane. This time I get to bomb Hiroshima and Nagasaki.”

Aogu stuck out his tongue.

They began to grapple atop a huge world map they had found discarded and flapping around on the concrete seawall last week—someone had likely put it out with their rubbish, not knowing it would soon be at the playful wind’s mercy—which they chased after, caught, and crumpled. Skittering down the sloping square-patterned seawall, they meticulously swept the area clean of sticks, shells and shards of emerald glass, before delicately spreading the map out on the beach and pinning it down with fist-sized rocks on each corner. It had provided a week’s worth of entertainment, and would continue to amuse them. They relished having the world at their feet.

They soon tired of tussling for the plane and plopped back down—he on Russia, she on Brazil, Argentina, and other weird-sounding countries.”You didn’t answer my question,” said Aogu, hugging his knees as he rocked back and forth. Miki raised an eyebrow, arms splayed behind her. “You know, the one… ēto, crash in sea or land?”

Miki thought for a moment. “Sea.”

“What! You’re crazy!” he shrieked in disbelief. “It’s gotta be land! Why sea?”

“Why land?” she returned.

He smirked. “Simple. There’s nothing in the sea! If you crash on land, there’ll be people and cars and internet and stuff.”

“If you crash on land, the plane will explode when it hits the ground. Boom! A huge fire. Everything crushed to pieces, everyone’s dead,” said Miki. “But if you crash in the sea, you’ll survive. It’ll sink in the water and float back up. Like Titanic.” Aogu clicked his tongue in annoyance, but his silence endorsed her argument.

Without warning, he stood up and cleared his throat. Microphone in hand, he made an announcement: “Ēto, attention, attention, this is your Captain speaking. Can you hear me?”

Miki jumped up and responded with a microphone of her own: “I can hear you clearly, Captain.”

“Wait,” hissed Aogu away from his microphone, “who are you?”

“Oh, about the family from Switzerland? Of course I’ve read that. Like, years ago.”

“No, it had something to do with croissants—”

“Baka! Crusoe!” Miki slapped her forehead. “Did you even read it?”

“The other Captain,” replied Miki.

“Why aren’t you in the cockpit with me?” muttered Aogu.

“Ah, sokka.” He moved the microphone back to his mouth.”Captain Miki, we have a problem. Our engines died and we’re gonna crash. Prepare for an emergency landing.”

“But where will we land? Are we going to die?!” wailed Miki. She paused, then whispered: “Someone needs to be the passengers.”

They hurtled across the beach, buzzing violently, unswerving wingspans, their nimble feet desperately grasping for traction upon the elusive sand. The wind intensified, rustling their hair and thin hoodies. “Aogu-kun!” shouted Miki over the whipping gusts. “Did you hear that Yuki-chan kissed Yoshiya-kun behind the gym last Thursday?”

“Majide! I can’t believe it!” He threw his arms up into the air and whooped, “Yoshiyaaaa, you did it! Good job!”

“I heard he blushed so hard, he looked like a cherry tomato! Yuki-chan said he looked sooo cute!”

“SAN, NI, ICHI, ZERO!” they counted down, collapsing onto the bumpy but snug coastal blanket. Small chests heaving, up, down, up, down. In the sky, black silhouettes flapped their pointed wings and charted paths of soaring destiny.

‘Captain Miki, are you—”

“Yes! There’s a small island nearby, let’s swim over!” She quickly took charge.”Captain Aogu, we need a search party. First, we need to find food and shelter and water.”

“Why do you always get to be the boss?” whined Aogu.”And anyway, we have water. This is the ocean, stupid.”

“Hey, I read too! In fact, I’m an expert on island survival. It was in a book about Robinson nanchara-kanchara that Misato-sensei told me I’d like.”

“Oh, about the family from Switzerland? Of course I’ve read that. Like, years ago.”

“No, it had something to do with croissants—”

“Baka! Crusoe!” Miki slapped her forehead. “Did you even read it?”

“I looked at the pictures…”

“Anyway, back to what I was saying before you interrupted me. Two: you can’t drink ocean water because it’s full of salt. Your throat gets clogged with salt and you choke and can’t breathe and die. Baka.”

“I know it’s a dream because the cobra is banded like/ a sea snake and the sea snake/ is preparing to spit.” Weekend poem, by Arjun Rajendran.

Our Meet the Editors series concludes with the art section. Varda Nisar knows the image speaks louder than the words,...