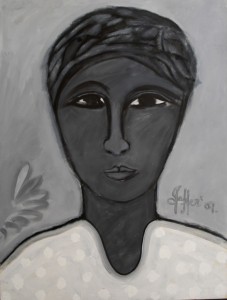 My happiest memories of those early days in Blikkiesdorp are about my brother Jabulani fluttering about in our small tin-can house like a butterfly, scattering clothes and plates and things, singing “Nkosi Sikelel’ iAfrica”, blowing a yellow vuvuzela, and sticking posters of the FIFA World Cup on the corrugated walls of our house. He and Thabo, the last kid, had been the wildest in the family since we were evicted from Athlone and camped here. Jabulani was ten and tall already, with hair so big and fluffy and fine. Thabo was three and had hair as rough as a foot mat. Mama said the boys’ brains had gone faulty for turning almost everything in the house into objects of football madness. Jabulani had written the words BAFANA BAFANA in blue ink on all his shirts and on Thabo’s. He had written the same words on the walls of our house, and Mama did not like that. Thabo, who had no vuvuzela of his own, made vuvuzela sounds with his mouth. Now he had begun to upset Mama the most because since we failed to give him a proper toy, he was always straying into other people’s tin houses, looking for something funny. After we saw him playing with a used sanitary pad he picked from God knows where, Mama said Thabo would pick up a snake next.

Watching the boys turn the cold winter house upside down warmed my blood and made me happy. The cold got us. Because our house was constructed of corrugated iron sheets, the inside of it felt too cold at night. Sometimes we felt as though we were living in a fridge. Mama made sure we covered our hands and feet with old Shoprite plastic bags picked from garbage bins in Athlone. And Mama yelled at us the moment we took them off for the ordinary reason that they made us look like we were from the refuse dump.

Chocolate, my sister, was fourteen and fat like a woman. Her hair was short, shorter than Jabulani’s, and she had a round face prettied with quick bright Zulu eyes. She would not let Mama rest with talk of Big Brother Africa. The first time Mama saw the reality show was at our former neighbourhood in Athlone, on a neighbour’s TV. She loved the idea that people from different parts of Africa could come together and live under one roof. But she hated the smoking and drinking and gals showing their bums like prostitutes.

“If you go there, Chocolate,” Mama said, “those people will kill you with smoking.”

“Cha, Mama,” Chocolate disagreed. “You don’t trust your daughter again or what?”

“Trust? Hm. Anyway, if you go there, you won’t win because they won’t like you.”

“Somehow, they will know.”

Jabulani came in, caught the theme of the conversation and said:

“Mama, if I go there, what do you think will happen?”

“You are a fine boy,” Mama said, grabbing two Shoprite plastic bags for her freezing hands. “You will cause a fight among the girls.”

Thabo, hearing his name bobbed his head up and smiled, his hands and feet swollen with his Shoprite bags. In a way he resembled a child boxer. In another, he looked like a frogman in a wildlife documentary. He hiccupped and giggled.

“Everybody will like Thabo because he is a happy boy,” Mama said.

Chatting up like this in Blikkiesdorp was one thing that made us laugh and come alive and forget how we came to be.

Thabo, not speaking because he is just three years old, began to nod his head, grin widely as if God had made him the prince of smiles in Blikkiesdorp.

“What of Lindiwe, Mama?” Jabulani asked, pointing at me with an unShoprited hand.

“Lindiwe will be feeling so lonely in that Big Brother house,” Mama said. “Everyone will think she is snubbing them, because Lindiwe doesn’t talk. And because Lindiwe won’t show her ass to anybody, they will evict her fast.”

I buried my head between my legs as Mama talked about me.

Chatting up like this in Blikkiesdorp was one thing that made us laugh and come alive and forget how we came to be. We all, except Thabo, knew that even though Mama carried us in her belly, we had different dads. When we were in Athlone, each of the men visited our shack. Chocolate’s dad, Mr S’bu, was a tubby man from Soweto. A very dark man whose teeth were white like stars and whose tongue was red and spotty like the lung of a goat. He visited us a few times. But he was the funniest man I ever knew. When he came he made me laugh my head off as he clapped for the President and the ANC, Mama’s political party. No one heard his claps because they were claps with two fingers. He was a man of great ironies. When we asked him what he had brought for us he said, “They will come by post! Courier. DHL.” Chocolate was always disappointed in him.

“You can’t buy a loaf of bread and you say you are my dad,” she muttered at him.

“Ah, easy, easy, darling,” he would say, his face swelling with a smile. “Your dad will one day be rich,” he said, slapping his fat, hairy chest and nodding convincingly. “I will make it big! In this life. Hahaha.”

“That’s what you said last time.”

He got out a dirty photo of men wearing torch-bearing helmets and boots, men working in a gold mine.

“See this, darling,” he said grinning. “This is where I’ll be working soon.”

I always believed him. I don’t know why he disappointed us. Mama told us later one night that he never got to work in a gold mine. He had joined a robbery gang and was shot dead in Joburg.

Jabulani’s dad, Mr Lucky, was a cute tall man who smoked dagga in rows and drank too much Castle beer. He gambled a lot. He was the most generous of our dads. When he made a big win, he visited us. I remember him visiting, often when it rained, wearing Wellington boots, which Jabulani would strip him of. I also remember him bringing a large plastic bag that contained cans of Castle beer, Coca-cola, rice, cheese, burgers…. He was a man that should have been rich. But I hated to see him drunk. He would strip himself nude and trouble Mama and Chocolate all through the night for sex, but no one was ready to give it to him. Then he would swear and spit and call all of us prostitutes. He made Jabulani cry and Jabulani always pinched his things night after night until he ran away from us nearly naked.

I’ve never seen my dad before. Mama said she had been raped in Athlone by a big white man. She had wanted an abortion, but decided it was no good shedding innocent blood. So it is not a surprise that I look so different from my siblings, that my skin is light and my hair is long and very soft, softer than Jabulani’s.

As for Thabo, his dad was a handsome cop with shaggy hair. He moved to Lesotho and then we stopped seeing him.

Sauleha Kamal on an evening with Swiss writer Arno Camenisch at Book Court in Brooklyn.

"now I want to return,/ return to that alerted night,/ when you walked on my face/ with a thousand legs...