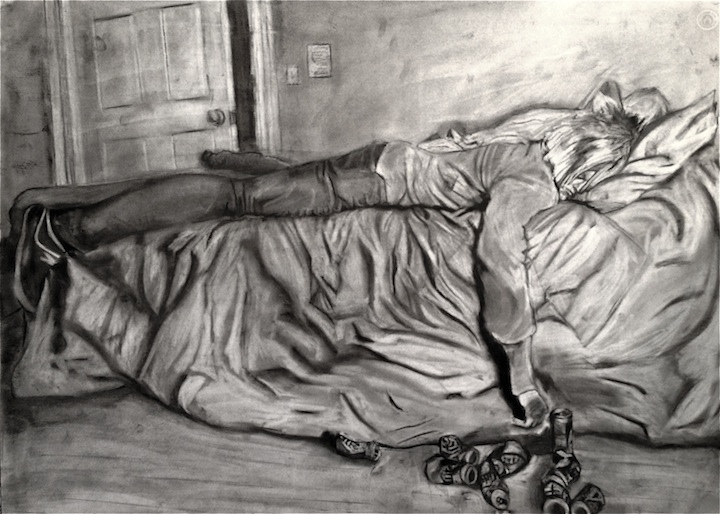 Artwork by Devon Reiffer. Image courtesy of the artist.

I wanted to end it.
I wanted to escape from my own grip and drop dead like a bird.
I wanted to be banished to the dead zone of poetry
and peck at my poems endlessly.
That’s how things used to be.

Poetry? I don’t have a clue about it anymore.
Dedications and contributions? To whom, for what?
Should I tear off my sorrow and donate it to you, honey?
Ew, did I really say “honey”?
Evil spirits, get out of here!
If I have to erect anything, it’ll be your cock.

I run a bit then gasp for breath.
I hold onto the rope and walk along the roadside.
I hang from an icy cliff and yell,
Come all extremities, unbearable borders!
I put on a desperate act,
but what I really need is a pair of socks.
I don’t want pity, and fuck conquering the summit.
I don’t have a flag to mount anyway.

I think I’ll hop on and join the car parade, unauthorized.
If I’m lucky, they’ll take a good photo from my best angle.
Amidst the weeping masses and cheering compatriots
I’ll become hysterical as we near the cemetery.
To heighten my hysteria, I’ll restrain myself and take a detour.
Oh, this happy ending sounds so phony!
It’s because my megalomania is stuck to a grilled pork belly.

When was the last time we were so close together?
Give me all you’ve got. Leave me alone
whether I get sliced up like a sashimi or done in by my bad luck.

I’m fine if things end right now.
Did I really brag like that?
If I don’t want to write anymore, I’ll just quit.
My idle days seem more meaningful than ever.
I miss the days when I didn’t give a shit.

I was so busy that I didn’t even enjoy the scenery.
It’s just like when I write something shitty.
Did I throw a fit, kicking and screaming,
saying I’d rather die than get up from my desk?
True love’s like that. You feverishly defend your dogma
and never get around to the penetration.
I’ve failed in both life and death.

If I were you, I would have done exactly the same.
I’m going – your voice in my head is my only friend.
No, I’ll go. I feel as if I’m being dragged instead. I’m totally nuts.
I think I left her out of my reach for too long.
It’s been almost ten years.
My shitty talent: I didn’t even recognize you.
You open your rotting mouth and blabber.

Goodbye, I was sad but my tears dried soon enough.
I work hard but I succeed.
Hey, you’re using messed-up syntax.
The gallows are almost fixed.
They’re using the rope that I dragged here.
Do you want it hung here?
Should I kick the chair for you?
We’ll hug briefly, then get strangled.
Like a bird’s neck caught in a hammock.
Like flowers in the grave.

This translation of ‘Seven Years After My Literary debut’ originally appeared in ‘Cheer Up, Femme Fatale’ (Action Books, 2016). The editors wish to thank Action Books for generously granting permission to republish the translation here.

“It is his last photo,/ but the camera keeps clicking/ every year without him/ in the dark lens.” Poem of the Week (September 9), by Mir Mahfuz Ali.