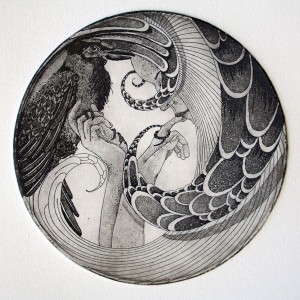 Sometimes after Sunday School I walk her

to her car, Miss Hooker, my teacher. I

want to marry her one day so it’s good

practice to open the door for her and

watch her get in, but not too closely, she’s

got legs, then shut it after she’s settled

in and remind her to fasten her seat

belt. Then I take two or three steps back so

I’ll feel a little safer and she turns

her engine over, the car’s I mean, and

waves goodbye and I see her lips move but

I can’t hear her, she drives an old Chevette

and she’s going to need a muffler soon

and my teacher as well and a grown-up

woman on top of all that so I mind

which I hate to think about because she’d

make a better wife for me when I’m old

enough, if only she’ll stay single ’til

I can ask her for a date and take her

out in my own car then even if it’s

and save enough for a down payment, then

buy my own. I’ll be too old for Sunday

and I’ll be shaving and have a man’s voice

and maybe I’ll learn to smoke and drink beer,

my folks do so I know how it’s done but

I need practice even though those are sins,

Miss Hooker says, so we’ll have us a talk

and if she says that she won’t go out with

a man who smokes and drinks, I guess that’s our

but I want something more, some sweet romance

that leads to courting and engagement and

marriage and honeymooning and children,

in that order. I’ve got it written down.

I don’t know just where babies come from but

I’ve got a feeling her legs are involved

because when I see them, see them up close,

my own feel frail. And there’s the honeymoon

–who knows what happens then? We’ll leave the church

all married-up and get into the back

seat of a Pontiac and I guess go

to the motel out on the highway and

I’ll carry her across the threshold, that’s

a fancy set of words for through the door,

and plop her down on one of the beds, no

single bed for us, we’ll want something nice

with a lot of space, then go back out and

carry in our bags and the extra one

I’ll bring with checkers and cards and Yahtzee

and Strat-o-Matic baseball and some snacks

and then we’ll be in business, and there’s free

cable. And when we’ve had enough Go Fish

it’s time for bed and because we’re married

but between then and the end of Go Fish

we’ll have to see each other naked, which

means without any clothes or damn few, so

maybe she can go into the bathroom

and take hers off and I’ll stay outside and

take mine off, I mean outside the bathroom,

not the door to our motel room, ha ha,

and we’ll meet halfway, which makes some sense

we’re husband and wife, or is that wife and

husband, or maybe both.. I’ll get in

bed first and shut my eyes and she’ll come out

when I call, Okay, Miss Hooker, I’m not

looking, the coast is clear, it’s time to sleep,

your head with the blanket, please, and I’ll say

Sure thing, you can trust me, and even if

I peek it might still be too dark to see

and breaking a promise is a sin and

how many times has she said that sinning

gets you Hell? I don’t want to go to Hell,

I just got married, and not when I die,

either. Then she crawls into bed and shakes

asleep and we will be, being married’s

hard. I might ask her just before we do

when exactly the first baby will come

and then she can lay it all out for me.

told me that the husband and wife rub and

rub against each other while they’re lying

there and a few months later she feels it

in her belly and–whoops–there’s a baby.

That’s the craziest thing I ever heard.

When Miss Hooker drives away I just stand

and stare until she leaves the parking lot.

Then I walk the half-mile back home. Mother

and Father are reading the newspaper

on the front porch. They don’t come to church, they

already know where babies come from and

all the dope. They tell me it’s a secret

and that I have to be older to know.

How much older, I asked them. Old enough

to know better, they said. That old, I said.

He has taught university English in the US, China, and the Palestinian West Bank.

We talked to Anam Abbas about her upcoming film ‘Showgirls of Pakistan’, a documentary feature on the lives of dancing girls in Punjab, Pakistan.

"I ask her if she knows how to love/ a woman with scars?" By Deonte Osayande.