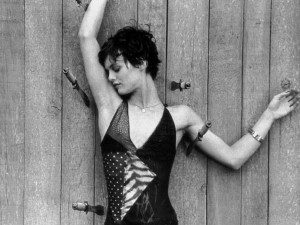 Despite consumerism’s pink chocolate box face, most human beings often equate love with very different things. Some will see it as madness, some as salvation, heaven, hell, a block of concrete around the ankles or a flotation device.

In film, from Casablanca to Rambo II, love and loss have indiscriminately gone together. In Pen-Ek Ratanaruang’s Last Life in the Universe, Patrice Leconte’s Girl on the Bridge and Fatih Akin’s Gegen die Wand, love comes into play in situations where the main characters wish to lose themselves, their lives or their current situations. But despite the films starting off similarly with people finding themselves (for various reasons) very close to ending it all, the stories progress different as love begins to assume different meanings for each.

Gegen Die Wand has all the makings of a full speed car crashing into a concrete wall. It is loud, fast and dangerous, and the rough edges of its minuscule budget work perfectly with the film’s punk atmosphere. By contrast, Pen-Ek Ratanaruang’s Last Life in the Universe, no less dramatic, is unbelievably quiet. Aided by Cristopher Doyle’s cinematography, the film looks like a fine summer morning: crisp, dewy and warm, and at times feels as though it could distill into nothing. However, from among all three films, Universe’s characters deal with the heaviest burdens, in perhaps the most hopeless (or helpless) of ways – caught in the eye of the storm, with nothing to do but wait for the unchangeable to happen, they share a moment of utmost serenity and togetherness – though it may also be considered a double edged sword, begging the question of whether learning they were not alone wasn’t, in fact, the crueler fate. And speaking of fate, Patrice Leconte’s Girl on the Bridge takes the idea of luck and destiny and turns it into a game of self-discovery, dragging its characters on a journey that could easily qualify, from a cynical point of view, as the deaf leading the blind, yet managing to forge itself into a colorful (black and white cinematography notwithstanding) adventure proving, by the end, that luck is what you make it, if fate lends you a friendly hand, that is.

At the center of all the stories are odd-defying encounters that manage to catalyze amazing changes in the characters’ lives. Whether it is the encountered person, the novel feeling or the desperate need for a lungful of metaphoric air, is unknown, but if we are to take the words of Girl on the Bridge’s Gabor into account: “there are no bad roads [in life], just bad encounters”, then perhaps the why is less important. In Girl, Gabor, a knife thrower – who has a habit of hanging around on bridges which are apparently the best places to recruit assistants, women with nothing to lose and therefore willing to become circus attractions with the added bonus of life endangerment – finds a girl preparing to jump. As chance would have it, their intentions were intertwined that day, yet there was something about the twenty-two year old Adele trembling on the bridge that called to him in a way different from the past, urging him to take two leaps – once into the freezing river to fish her out and later, a figurative one, back into the world he had decided to leave behind, determined to grab hold of his fortune and life.

What matters is the moment, fleeting or as permanent as human life can make it, of crossing paths or merging destinies, which, regardless of what comes before or after doesn’t lose its permanence.

Gegen die Wand’s characters meet after each has unsuccessfully attempted suicide, one trying to escape the demons of his past, and one trying to escape the very present and stifling realities of her conservative family and their expectations. Some self destructive dramatics later, they decide to get “married”, since this could mean her freedom from the claws of her family. But things are never so simple and lots of punk music, various sex partners and a couple of shared meals later, the union rapidly evolves into a real one, misunderstandings and miscommunication included. By the time the two realize the mutual nature of their feelings, it is already too late and they are forced to separate, not to reunite for a few long years.

Last Life in the Universe is a study of human alienation and love happens here as a revelation that said loneliness and alienation are not as deep as they initially may have seemed. The principal protagonist, an unassuming man suffering from OCD and flirting with suicide is, in fact, running from a complex past that just so happens to barge in on him one day in the form of his Yakuza brother. This would be a small matter if it weren’t for the people chasing after his brother who also happen to barge in, concluding everything in a shoot down that forces him to leave his apartment. As he finds himself on (yet another) bridge, trying to end his own life, he witnesses a shocking accident and is dragged into the life of the woman involved. What follows is an almost surreal trip of discovery, tenderness and togetherness. Neither of these people is innocent to the ills of life, but they both look at this budding relationship with child-like naiveté. As the film progresses, one almost forgets (to its great merit) where we began – what cloud was hanging over the two main characters – and as such, the conclusion becomes all the more chilling.

In film, as well as in life, one might say love can show up when you least expect it and evolve in the most surprising ways, sometimes saving the day, sometimes only reminding you of what you have to lose and sometimes rushing in like a tornado and scattering the contents of your laundry basket all over the neighbor’s front yard. What matters is the moment, fleeting or as permanent as human life can make it, of crossing paths or merging destinies, which, regardless of what comes before or after doesn’t lose its permanence.

An Afternoon of Gifts