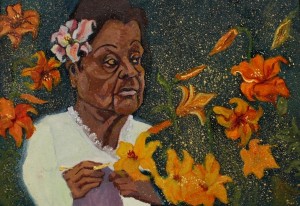 The low ceiling is studded with

on their shrub-like branches

I shut my eyes for a second and open.

A plateful of fruits and berries

shine and blind my eyes,

as if it was something

to be only given away to someone

who lost his eyes in a storm

but knows his touch and smell

on this placid October day.

Bibhu Padhi’s poems have appeared in distinguished magazines throughout the world, such as Indian Literature, Contemporary Review, Poetry Review, Poetry Wales, The Rialto, Stand, The New Criterion, Poetry, TriQuarterly, Antigonish Review and Queen’s Quarterly. They have been included in several anthologies, the most recent being The HarperCollins Book of English Poetry (2012). His seventh book of poetry, Migratory Days, was published last year.

“She stood over the pancakes and knew that there was a cost for pleasure for a woman like her, living in a multitude of overlapping worlds.” Story of the Week (November 11), by Isbah Raja.

Inside the Rosemary Bush