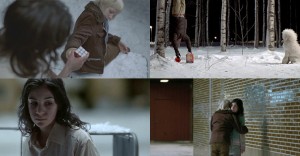 Let the Right One In is a cold film, born from a cold novel. We begin the former with a tranquil yet ominous shot of snow drifting across the screen in slow, soft silence, moving from the darkness in the left of the frame into a light that causes the flakes to glitter. It is an image of beauty, yet the contrasting chiaroscuro of the shadow and light becomes somewhat disquieting in the length of the shot, the stillness of the frame and the sombre march of its contents. Snow, ice, and their component water recur throughout the film, important symbols that flag up a myriad interpretations, drawing on a long history of these tropes that can be traced back through its Gothic ancestry.

A ‘Winter Gothic’ sub-genre has long been an unacknowledged presence in literature, and yet the weather itself is identified as inherently important in canonical Gothic texts. While the colder features may not have been isolated, the weather and landscape are often aligned with the psyches of the characters. In LTROI the winter elements are allied with the vampire, anchoring the supernatural in the natural. The weather combines with the landscape to create symbol and affective agent, and, particularly in tales of ‘Winter Gothic’, brings the self into the external and the external into the self to blur the boundaries between real and imagined.

The canon elements endure in this modern Scandinavian horror, tempered to more subtle evocations in the age of psychoanalytic awareness. The Gothic castle is replaced by the icy wilderness, and LTROI is so firmly anchored in its mundane time and place that snow and nature can be the only Gothic shelter.

Winter creates arenas of uncertainty, agoraphobic and claustrophobic spaces in turn. The snow falls in stately motion, silent as a ghost, shutting out normality. It constructs narratives of descent amidst strange worlds of altered sensory perceptions, evoking Freud’s uncanny, as the past is always covered yet always threatening to return to the surface and be revealed.

Symbolically, snow and ice lend themselves to a purity/danger dyad that provides one of many links in LTROI between Eli the vampire and the climatic presences. The blank whiteness of the snowy landscape immediately recalls purity, but in the novel we find Hakan quoting Almqvist: “Two things are white / Innocence – Arsenic”, and we are continuously shown Eli’s feral violence juxtaposed with the vulnerability of her appearance.  She has the blank, savage and pure beauty of icy landscapes. The modern fairytale aspect of LTROI is also built from the snow that fills the texts, black and white backgrounds creating the perfect setting for red. In the film adaptation of LTROI red is important and recurrent; blood upon snow and white skin takes on a more potent visual significance.

The excellent handling of colour in the cinematic LTROI is exemplified most potently in the scene where Virginia wakes after being bitten. It begins with a lingering shot of a tree whose branches glitter as if encrusted with broken mirror shards, tranquility etched across the frame. This is the most traditionally beautiful shot of the film thus far, and has the ice translating the mundane to the beautiful, promulgating the heightening in sense Virginia will experience. With a cut we move to an interior of varying deep reds, echoing the ultimate interiority, that of the body, the room an approximation of Virginia’s; and as she stirs in this vermilion house, so the vampiric stirs within her.

Winter in LTROI can be read in so many ways: for example the recurrent weather-measuring instruments among the father figures of the novel construct interesting Freudian   possibilities, and the return of the repressed when related specifically to the Scandinavian context brings up intriguing socio-historic readings.

However, one of the most resonant ideas that occurred to me whilst reading and watching was the presence of another text in the murky reflections conjured in the ice. Both novel and film can be seen to place their characters deep into the winter of the final circle of the Inferno of Dante Alighieri; Cocytus.

The repetition of the ice and snow tropes that evoked Cocytus for me in the film was confirmed when I read Lindqvist’s book and arrived at the section where Hakan imagines this last and coldest station. Here he exists in mirrored Blackeberg, in the frozen lake, in over his head as he manages to stand perversely at the side of Satan. We can read Eli as Satan, allied with the ice, a part of it, and chewing the inhabitants at neck, face or wrist. Faces and chewing recur throughout the novel, memorably in Hakan’s rise from the morgue, his new vampiric self now resembling another of Satan’s three heads, the red one, his own face red from the acid which chewed his face before Eli. He is identified with the ice now as a vampire; he does not suffer at its hands. When he is finally subdued his skull is described as cracking like splitting ice, and as the ice of his vampirism is broken he returns to victim, chewed again, once by each head: acid, Eli, and child-violence’s revenge.

The novel tells us that it was the ice itself that took Jocke’s face after Eli has fed, again allying the two as one and echoing both the previous chewing and Dante’s reference to the loss of feeling in his face when standing upon Cocytus. In the film Jocke is frozen just as the damned are, a betrayer of guests with just the face above the surface. He is found like Ugolino, who tears at the flesh of his children, chewing, while Jocke is discovered by children whose trauma is the sight of his punishment. With no Virgil to comfort them, they stand frozen with fear upon the lake. Each description of a corpse immediately recalls Dore’s sketches of that icy coffin-lake, and the final swimming pool set-piece evokes the savage fates of Brutus and Cassius. 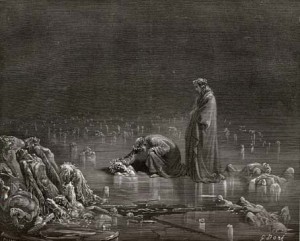 The inhabitants of Blackeberg tear at each other and themselves like Cerberus in buildings often described in hellish terms. The geometry within the frames of the film accentuates the isolation of their punishments, each sinner to their own contrapasso. Small square windows and harsh right angles jut from the snow as lonely tombs for the damned, burning as Virginia does in her hospital bed-sepulchre in Dis, or freezing outside in glass graves beneath Cocytus as Satan chews in icy stillness. The alien, constructed nature of Blackeberg is shown in its anti-organic modernist architecture. This perhaps sets up the community, or humanity, as traitors to that anthropomorphized Scandinavian weather, returned in Gothic revenge as Eli, the repressed. This hell of sensory sublimity and symbolism is easily read as eco-criticism, the extremes of the land mapping onto the extremes of the Inferno in judgement for our sins of betrayal to nature.

Winter in LTROI creates a perfect Gothic arena, creating uncanny landscapes that are more than backdrop. Its leitmotifs of snow and ice become complex facets intertwined with the narrative and characters, perhaps also constructing the glassy spires of meta-narrative above. The elements of winter here freeze a Cocytus beneath the novel and its cinematic adaptation, casting the characters into the lower reaches of the Inferno. Together they become an impressive crystalline structure of symbolism that generously affords us as critics much space to project, whilst remaining a most engaging aesthetic experience of icy beauty.

Film Critic Marcus Nicholls is a member of the Film Team at The Missing Slate.

“They woke to find an angel on the beach/ as heavy as the bottom of the sea,/ as dark as boulders locked in frozen lakes…”
Weekend poem, by Adham Smart.

by Dušan Gojkov, translated from the Serbian by Maida Salkanović