Roger Ebert would have loved Oblivion. I wish he would have lived long enough to see it, as throughout his career, he proved over and over again that he was a science-fiction fan at heart. Who could forget his unending praise for Dark City, or most recently, his four-star review of Prometheus? Seeing Oblivion, would have undoubtedly filled him with the same joy and wonder, and for that reason I am dedicating this review to him, as silly as that may be to some. I grew up watching Siskel and Ebert, enjoying their often heated, although good-spirited debates about movies, and I learned to love debating film, critiquing and analyzing its form and content, as much from agreeing or disagreeing with Ebert as any film class I ever took. Later, through the internet, I kept up with Roger as he became an avid Tweeter, and he often engaged in comment debate with his fans. He showed other sides of himself, such as his political beliefs, his intellectualism, and even some of his private life, such as his battle with cancer. For these reasons, I felt his loss, coming to consider him a kindred spirit of sorts, someone who would consistently be there to share his wit and his love of film with the world. I’m not aware of any other film critic who successfully achieved the rank of film icon. But, as I am sure Ebert knew, the world doesn’t stop, and this is as much a comfort as it is a daunting truth. At least this means as long as there are people, there will be people making art. 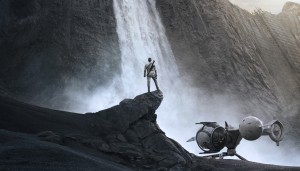 Oblivion is the science-fiction film of science-fiction films. It is a masterpiece of the art form, flawlessly executed in every way imaginable. It is hard to believe that this is Joseph Kosinski’s second film, his first being Tron: Legacy, which although an enjoyable movie, definitely had its flaws. You will be hard pressed to find anything wrong with this one. This is a master work, from a new artist brimming with so much talent it practically pours off the screen through every frame. I fell in love with this movie.

The story is an original epic, penned by Kosinski some time ago in graphic novel form, centering around an Earth devastated by an alien invasion war, and two characters trying to get through a stint on the ruined planet as supervisors of energy collection, before being allowed to head to the new human colony on Titan. Tom Cruise plays Jack Harper, a character we immediately connect with, as he seems to have memories of Earth before the war, despite having his memory wiped for security protocol, and he tries to reconnect to that past by salvaging artifacts from the world, such as a record player, and old books. All this, while trying to avoid being killed by the Scavs, the name they have given to the aliens who remain on the planet’s surface, after the majority of them were wiped out in the war by nuclear weapons.

I’m not going to go into any more detail about the plot, because it would be difficult to go much further without giving away key twists, one of which is given away in the trailer, a huge mistake if you ask me. The twists in this movie are mind-bending, and exhilarating. Kosinski manages to punch you in the guts, and fill your sails with hope at nearly the same time. And this movie is so breathtakingly beautiful. The visual effects are seamless. The scenery and art design are wonders to behold. All these elements are set with a backdrop of gorgeous electronic music, that lures the viewer into a hypnotic state. Prepare to be wowed.

With all this originality on display, Kosinski also manages to deftly weave in nods to previous science-fiction classics, like little winks to all the nerds in the audience, and this becomes part of the fun of the movie, catching all the nods to the influences that made this movie possible. All of them are very subtle, but nevertheless, there are several films that I noticed references to: Star Wars, Alien, 2001: A Space Odyssey, Dune, Fahrenheit 451, Predator, The Matrix, Tron, and probably a few others that I missed. See if you can catch them all, as most of them are visual recreations of classic shots, or simply visual elements added into the mix. For instance, the costume design of the Scavs is a combination of the Predator alien’s helmet, and the water-suits worn by the Fremen on Arakis.

In my opinion, this is the first contender for Best Picture, as it is easily the best film I have seen so far, and its flawless execution will earn it a place in history among science-fiction classics of the past, and those yet to come. Since I have dedicated this review to Roger Ebert, I am going to end by using his grading system, and say this is a four-star film if I have ever seen one. Go see it for yourself.

Film Critic Jay Sizemore is a member of The Missing Slate’s Film Team. Read all about him here.

Hereditary Voids and Our Attempts to Climb Out