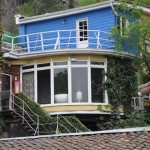 Walking through La Chascona in Santiago, the giant shoe, the African masks, the long row of Matrioshka dolls aligned on the slim window sill and narrow creaky staircases all emanate a sense of its former proprietor’s eccentricity, as well as his love for collecting. La Chascona, literally “wild hair” in honour of his mistress’s notorious curls, is one of three houses designed and inhabited by the world-famous exiled diplomat and sea-loving communist, the Nobel Prize-winning master of love poems and icon of odes… the poet, Pablo Neruda.

This July, a hundred and nine summers after the poet’s birth and four decades after his death at age 69, the house at Cerro San Cristobal still stands as a testament to its master’s mind. Neruda constructed La Chascona with a poet’s diligence for detail. Tucked into the hillside of San Cristobal in Chile’s capital with what used to be (now drowned in a sea of smog) a stunning view of the Andes, every inch of the house, from the eclectic floor plan to the walls mapped with navigation charts, all serve one simple purpose: to inspire poetry, to remind him of his muse — the sea. On his writing desk beside pen and paper sits a sailing ship stranded in a bottle.

“We have exchanged practical and symbolic objects:” reminisces Parra, an equally eminent Chilean poet, “a Whitman for a López Velarde; a ceramic of Quinchamalí  for an Araucanian poncho; a pocket watch for a houseleek garden, butterflies, etc.”

I examine these trinkets amongst the collections lining shelves and walls and tables, but the objects do not speak to me the way they once did to Neruda. I cannot spot the ones he acquired from the man who claims that he has “shared Neruda’s life for years, as a neighbour, as a disciple, as a sporadic visitor”, the ones that have a symbolic, literary or simply emotional tie to the physicist, mathematician and poet with inverse initials: Nicanor Parra. 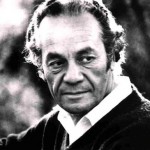 Parra, known as the Chilean Anti-Poet, is a revolutionary, a rebel politically as well as poetically. As he clarifies during a speech honouring Neruda: “…the intention of the antipoet [is] to jolt the moth-eaten foundations of worn-out ossified institutions.” Parra speaks true to his ambitions: the speech has little to do with traditional laudation. Instead, it explores poetry and the nature of poets. Parra jumps between prose and poetry, parentheses of inserted and tangential thoughts, original word games and phrases and rhymes and syntax. It is a meticulous mêlée of styles, strongly reflecting his poetic work: skilled and chaotic, colloquial and playfully profound.

In his Manifiesto, published in 1969, Parra gives insight into the ideas behind his revolution of Latin American poetry with a fresh wind of words, turbulent and with a strong, rebellious purpose. It is said to even have influenced beat poets such as Allen Ginsberg. In the opening stanzas of the Manifiesto, Parra proclaims: “Ladies and Gentleman, […] the poets have fallen from Olympus/ […] poetry is no longer a luxury for our generation, it is an article of primary necessity. /We cannot live without poetry.”

His style– subversive, edgy and colloquial, but also simple and honest– carries poems which he groups into categories such as: “Ecopoems”, “Jokes to mislead the police”, “Poems and Antipoems”. And yet it is his Manifiesto that gives us a clear insight into Parra’s vision for poetry and the concepts underpinning his work: he advocates “the poetry of ideas”, but also poetry whose “sunbeams must arrive to everyone equally/ Poetry in reach of everybody”. Parra’s poet is not “an alchemist” but simply “a man like every other man/ A mason who constructs his walls/ a constructor of doors and windows”.

Neruda could draw out both the beauty of the simplest or most trivial of things.
Neruda’s poetic self is less of a working man and more of a romantic. His style is almost the antithesis of Parra’s: Neruda is inspired by objects, by the sea, by “the big tuna at the market”, composing with delicacy and richness Ode to the Tomato, Ode to my Socks, Ode to Salt. There was clearly something about the common objects of our world that captured Neruda’s fascination. He could draw out both the essence and the beauty of the simplest or most trivial of things. In an ode to the Magellanic Penguin the poet describes with ease and almost decadent ornateness, “[the child bird] looked at me with its ancient ocean eyes:/[…] it was old as the salt;/the age of moving water”.  In his Ode to The Onion, Neruda draws out the profound symbolism of an onion, without seeming contrived or ridiculous:

“so did the earth
make you,
onion
clear as a planet
and destined
to shine,
[…] upon
the table
of the poor.”

A houseleek garden was exchanged for a pocket watch, according to Parra. However, it seems that the bartering between the poets was not reserved exclusively to tangible objects. The tradesman relationship was not even centred purely on poetry. Their strongest bonds were formed in their ideologies, a sharing of a common, strident and political cause: communism.

“you let go beauty/ long ago/ well before the first scratch// the second bruise/ the third open wound/ fading into a flush of rust…” By Abeer Hoque.