The samurai film is a staple in Japanese cinema, with bloody duels and oftentimes tragic heroes staking their lives on the way of the blade. However, during the time of the samurai, there lived many kinds of people who did not have the have the same propensity for war or the same readiness to die for the sake of honour. Surely, history cherishes the memory of sword-fighting legends, often making their impersonations glide across the stage or silver screen and recalling their heroic deeds, but what of all the others who populated that time? What of the people who didn’t duel their way into legend? 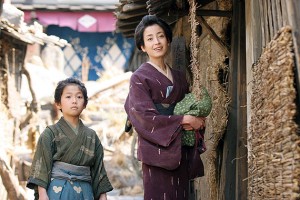 Hirokazu Koreeda decided to make a film about those very people in Hana (also known as Hana yori mo naho), creating a story about an unlikely samurai, much in the same way that a few years earlier, Yoji Yamada told the story of Seibei in Twilight Samurai. It is with a similar kind of tenderness and amusement (though in Hana, the humour is much more obvious, almost obscuring at times the sentimental vein of the film) that Koreeda tells the story of Aoki Sozaemon, played by Jun’ichi Okada, who had arrived in Edo (as Tokyo was known at the time) to seek revenge for his father’s death. For this end, Soza (as everyone calls him), takes residence in one of the poorest areas in Edo, a place where someone escaping justice was likely to hide and where his chances of finding the killer he was looking for were highest. Despite his lack of skills when it comes to sword fighting, Soza is determined to follow his family’s wishes and exact vengeance on his enemy or die trying. In his search, he is assisted by one of the neighborhood’s residents, who uses his network of connections to lead Soza towards “suspects” that do not match his enemy’s description to a hilarious degree. As he waits for his chance to finally arrive, he interacts with the people in the neighborhood and, bit by bit, loses some of his naïveté in exchange for an awareness of how pointless his (or any) death might be under the circumstances. He befriends some of the residents, most notably a young widow and her 8 year old son, and together participate in a play improvised in the neighborhood to celebrate the coming of spring. When he finally finds the man he had been searching for (despite his neighbor’s attempts at concealing his identity for Soza’s own sake), his view on life had already changed, and seeing his enemy (played by Tadanobu Asano) with his wife and young children makes him think of a better way to preserve his honour and his way of life.

The film’s title, Hana (meaning flower), relates to an idea that recurs throughout the film, first through Soza’s foolish expectation for his death to have the poeticism of falling flowers and then as a symbol of life and rebirth, as the film progresses and the main character develops from a shy, painfully naïve young man pushed onto a dangerous path by his family, into a sociable and mischievous person, who isn’t afraid of taking his destiny into his own hands.

Korreda’s playful approach to the samurai genre doesn’t happen without a strong nod to one of the most famous (and re-enacted in theater, television and film) stories of samurai vengeance, the story of the 47 Ronin. In the background of Soza’s story, the legendary 47 were preparing their own vendetta against the killer of their lord. Through their interactions with Soza and the other inhabitants of the neighborhood, the Ronin are presented in a warm, human light, far from the brooding righteousness of legendary heroes. Even the climax of the film finds the heroes in unexpected positions through a chain of events that further underlines the difference between legends and the people whose actions birth them. It would even be fair to say that the film would have been more successful had there been fewer parody moments throughout or had the film been less aware of its own influences. Perhaps, if Koreeda had opted to walk a finer line between the moments of lighthearted buffoonery and those of sentimentality, a more poignant film could have been born. However, these qualms may be small, since the film is endearingly entertaining as is.

On a slightly ironic note, a film portraying the exploits of the 47 Ronin is set for release later this year to be directed by Carl Rinsch, starring Tadanobu Asano, who played Kanazawa Jubei, Soza’s enemy in Hana, Hiroyuki Sanada (Seibei in Twilight Samurai), and… Keanu Reeves.

“here/ death is frolicking in the snow// and only a quarter of the story is ever told/known…” Weekend poem, by Arindam Banerjee.

Poem of the Week (August 6), by Richard O'Connell