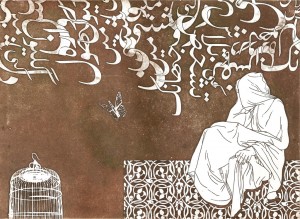 After thirty-five years of living in Dubai as a guest worker, Ram Pillai, prone more often now to a weariness of the bones, if not yet an ache of the heart, is leaving. He must bid goodbye, before the end of the week, to his greatest benefactors. Some of them have died, and others wouldn’t remember him. But most are still around. The former Bedu might have lost all visible traces of estrangement from the city of lights and arguments, the once-green Emirati with an eagerness to spout off knowledge of “the way the British used to manage things” might no longer show such insecurity, and the abaya-wearing native women might walk with a little more pep in their step and a little more stiffness, but you can’t tell Ram that in all the ways that matter, Dubai isn’t still a shy bride, a virginal flower, a shadow in search of itself, and that only coaxing and coquetry work, force of any kind the banned substance in this most seductive of the Emirates.

His decision is somewhat sudden, as his friends in the labor camps have already claimed, but wasn’t it always inevitable? It’s neither as simple, nor as complicated, as the conviction of impending mortality. He’s only fifty-five, even if the strong Gulf sun has sapped the strength out of his body and soul. His years of hard labor were few and long ago. Still, how real is his good health? He doesn’t know. He also doesn’t know where he’ll go back to in India. His devout father and mother, in the Kerala village he came from, are long dead. Over the decades, he’s had news that his small fishing community, off the Malabar Coast, has nearly emptied; the young people have gravitated to the larger towns, much as he, in 1972, packed his belongings in a small bundle to leave for Trivandrum, resolved to quickly earn the money to pay a recruiting agent the necessary fee to secure a coveted place among the shiploads of people embarking then for the wealthy Emirates. Something tells him he must leave Dubai before he’s made to; why, after decades of never having had the slightest run-in with the authorities, he should fear this, he doesn’t know.

The mistakes of judgment Ram made in his youth, added to the complications of having overstayed his original two-year work permit, have long ago ceased to bother him. He has justified his silent bargain to his own satisfaction. Law and justice are abstract constructions, generalities which concrete facts usually make a mockery of. At the public library, which Ram has begun to frequent in recent years, he’s become fond of Santayana. He has a difficult time understanding such philosophers, even in accessible translation, but he is more than ever convinced that self-sacrifice is not the Holy Grail orthodox belief makes it out to be. Still, Ram’s past is beginning to rear its monstrous head when he least expected it, as his heart becomes less supple and his body a less wieldy instrument. If only he could tell someone! If only there were someone to unburden with! But he hasn’t whispered a word of his secret to his most trusted friends. They know Ram has some leverage whereby he can remain in Dubai unmolested, in an “illegal” status, for a lifetime, but out of respect for his apparent sadness, they’ve observed limits in inquiring what advantage he’s acquired.

Something tells him he must leave Dubai before he’s made to…
Not even Friday makes Dubai really slow down; still, the traffic on Khaleej Road, heading into Al-Hamriya Port, is thinner than it is the rest of the week. Instead of taking a bus, Ram is driving today his old brown Datsun; it’s rare for a worker living in the camps to own a car of any kind, but Ram has been discreet enough not to have bought a newer model, although he has enough savings to easily afford one. This way, fewer questions will be asked. Also, having a car of some kind allows him to occasionally park along the main shopping boulevards, without too many probing glances; his actual status, as a laborer of long residence, should be self-evident: he’s not trying to pass himself off as one of the Indian professionals, welcome for their limitless credit cards at the shopping plazas, received by the salespeople almost as well as European and American shoppers. Also today Ram has taken a long bath, wondering if in India water will be as plentiful. The camp he lives in is so close to the city that it’s almost not outside it anymore, and because it acquired water and electricity as early as two decades ago, it’s debatable if it can even be called a camp. Rumors that Ram’s camp will be demolished for the city’s expansion needs have been rife for years; Ram has never paid attention. Workers he knows from the real camps, farther out and without any real facilities, where eight or ten to a room is common, have always kidded him about his “privileged” status; he’s tried to take it in a tolerant, grandfatherly spirit.

Already, well before noon, the most devout among the Emirati worshippers are making their way to the Grand Mosque, their flowing white dishdashas starched and sparkling, their headscarves tightly tied by the black aghal. It used to be, at one of Ram’s first jobs, at a construction site on Sheikh Zayed Road, near the present Golf Club, that he would sometimes accompany Muslim workers to the mosque, despite his own Hindu origins; Islam, like Hinduism, has had little attraction for him, but it was either that or, instead of the hourlong Friday prayer break from the dusty screaming site, taking only twenty minutes for lunch at one of the hot roadside tandoors set up for Indian laborers. The mosque is the only place in Dubai where national and foreigner, citizen and guest, rich and poor, stand side by side, see each other’s faces without feint or filter. In the mosque, all faces are empty of demand.

“Due to the severe lack of options the girls currently working here have, they are more akin to sex slaves than sex workers.” S.E. Smith reports on human trafficking in Guangzhou.

The author of "The Cloud Messenger" talks about "post-9/11" writing, what it means for emerging Pakistani writers and why he...