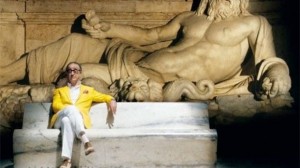 It doesn’t take long to fall in love with The Great Beauty. Its rhythm-filled, yet chaotic opening — on a rooftop patio as a bunch of higher class elitists unwind with choreographed dancing, copious amounts of alcohol, and infectious music — reminds one of Baz Luhrmann, although Paolo Sorrentino’s film is not just a glossy veneer smeared across the screen hoping to appeal to as few senses as possible. The Great Beauty consists of a gorgeous series of vignettes, loosely cobbled together as it follows Jep Gambardella, a successful writer, who, after turning sixty-five starts to suffer an existentialist crisis, wondering why he never wrote a second book. It could be argued that the city of Rome is another main character — Mr. Sorrentino unabashedly shows his love for the city, gliding, tracking and moving through a slew of iconic locations and historic monuments. Not once, in its two-and-a-half hour run time, does anything fall into visual monotony. Sorrentino’s eye is incredible, and while the common habit seems to have become looking at the negative aspects of Italian society and how it got to be that way, Sorrentino focuses more on the positives.

Jep, much like the city, is going through a transition, both propped up by what they believe makes them happy — an empty, repetitive lifestyle as once iconic religious and cultural symbols start to decline. An arrogant and single-minded priest embodies this metaphor; a character who while many believe is the next pope, hasn’t truly ascended or showed any signs that he would. But this film carries optimism, hinting that Italy will come out on the other side happier and better as soon as they find out who they are and accept what truly makes them happy.

Despite this seemingly unlikely mixture of elements, the film is surprisingly funny, either through the absurd Fellini-like scenes, or the casual banter between characters. Toni Servillo makes a fantastic Jep, adding as much to the character with his small, barely noticeable facial expressions and his big, soulful eyes. The film does have its flaws though. The metaphors and allegories in the film start to become more blatant, particularly in one scene where the themes of finding your “roots” and “migration” are beaten into the audience. With this said, The Great Beauty is a nearly great film, which fully utilises its historic locations through mesmerising cinematography and direction, well-rounded acting, and a unique score.

Daumoun Khakpour is Contributing Editor for Film for the magazine.

"Close up, her face/ dissolves into blank squares./ She does not know anymore/ who she is." Poem of the Week...