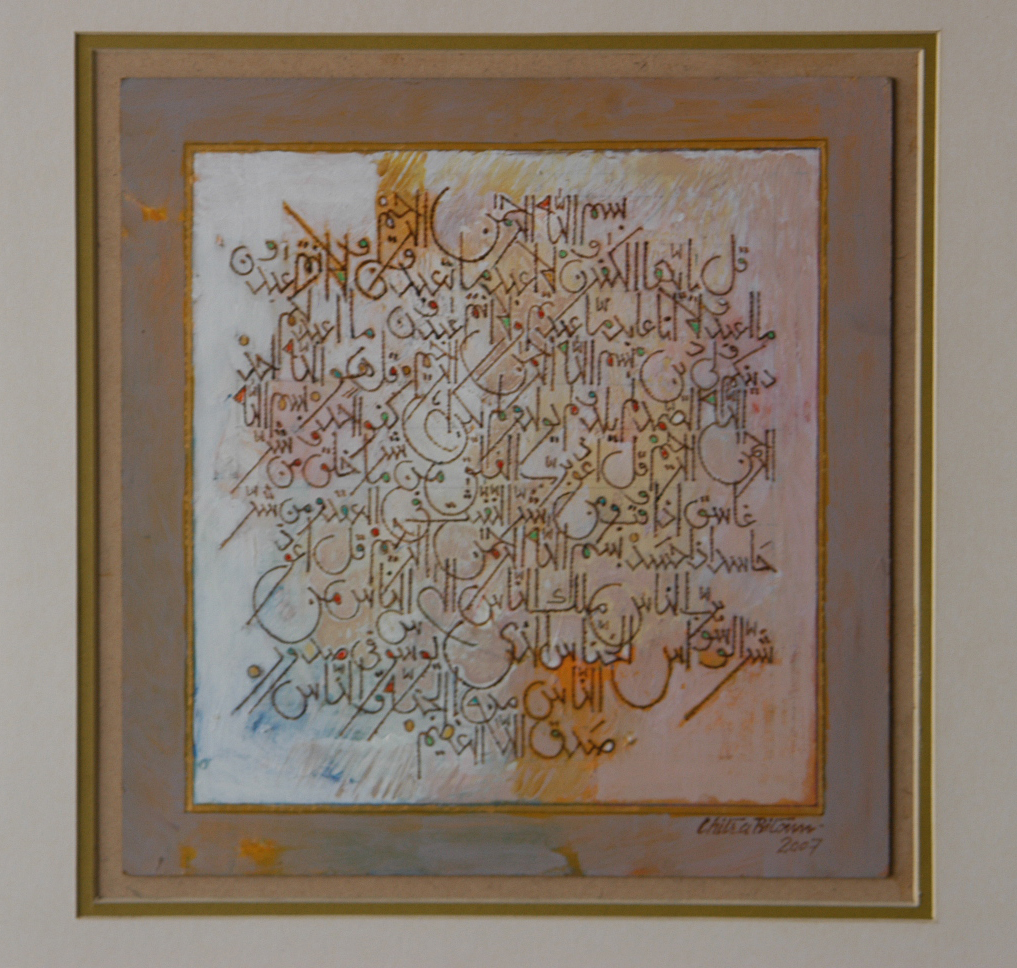 Arabic, you slipped into our life by accident,
and began to live on the ridge of our tongues,

Arabic you ate at our table and became plump on our hospitality;
But Arabic you also remained distant, resting on the highest shelf,
wrapped in soft pashmina,

Arabic, you became the pervasive musk of Qari Sahab’s skin,
the rapping of our wrists, tiny red welts
like shriveled roses;

But Arabic you also crept in through mother,
enveloped in warmth and prayer; Arabic, you became
the beating of her heart to timed ayats in Arabic,

We held you, placed you on our forehead,
and kissed you, in Urdu, we confessed,
our sins against sacred Arabic,

Arabic you appeared in our dreams, we exorcised our demons,
on round rosary beads of Arabic,

Arabic you were the narrations of the sahabah,
you became florid descriptions of The Prophet (PBUH),
Arabic you became the sound of his voice,

Arabic you mourned the loss of him and became wrapped in that loss,
Arabic you lost your bearings, you forgot yourself,
in that loss;

In hopes, spun mostly from the Arabic we travelled,
to the sacred land, the blows of the kafeel’s Arabic,
broke our backs and our bones;

In Arabic, we paid him our skin, our flesh;
He stole from our mouths, portions of Arabic;

Arabic beckons to us from behind filigreed windows;
It resides in the sanctum sanctorum of our minds;

We run our hands on the carved door of Arabic;
We bless the embroidered walls of Arabic;

We whisper our protest in Arabic;
We run our hands over the beautiful braille of Arabic;
Our eyes hurt in Arabic.
~ Rakhshan Rizwan

Rakhshan Rizwan was born in Lahore, Pakistan and then moved to Germany where she studied Literature and New Media. She is currently a PhD candidate at Utrecht University in the Netherlands. As well as previously appearing in The Missing Slate, her poems have appeared in Papercuts, Cerebration, Muse India, Postcolonial Text and elsewhere.

Poem of the Weekpoetryrakhshan rizwan

Morality is difficult enough in life, but morality in literature spans a much richer tapestry writes Maria Amir.

"Slow in learning how to make bombs, front restaurants or forge dollars,/ I studied Liberation Theology/ in cloud monasteries, near...