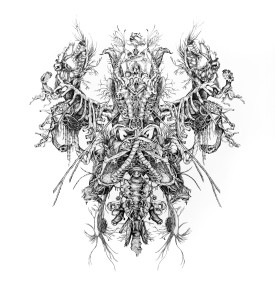 Artwork by May Lim

In the dream of his death
Rinpoche returns to the room
of his youth—the wood beams,
the barking dogs, the fields
of potato and wheat; mother
with her prayer beads
by the window grills,
muttering grace after grace;
sister in the kitchen
preparing flasks of tea.

In the dream of his death
Rinpoche sits in a fur-lined coat
hemmed into the window light,
waiting for father to come home
and hold him. Gone, gone,
he says, Gone altogether beyond.
Because this is how he wants to go—
like an ochre flower in a field,
hungry and alive, the wind rushing in,
scattering him everywhere.

This is how it could be
in our own dreams of dying.
If we believed in mandalas, those maps
that guide us from periphery
to centre, and over to the other shore,
we’d know we’re always where
we’re meant to be—lying down
among the trees, covered in coats
of bark and mud, waiting for the sages
lead us out of the forests, to the sea.

Tishani Doshi is an award-winning writer and dancer. She has published two collections of poetry – ‘Countries of the Body’ and ‘Everything Begins Elsewhere’, and a novel, ‘The Pleasure Seekers’. Since 2001 she has worked with the Chandralekha troupe in Madras. Currently, she divides her time between Cheyyur, Tamil Nadu, and elsewhere.

‘Lesson 7…’ is reprinted from ‘Everything Begins Elsewhere’ (Copper Canyon Press, 2012), with permission from the poet.

"I am the map/ I am the cartographer// no sextant/ no compass/ only eyes/ ears and tongue." By Shikha Malaviya.