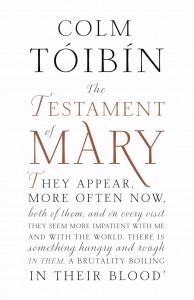 ‘Jesus,’ says a recent Guardian article, ‘is having a moment in literary fiction.’ The article names two books published in the last twelve months, one of which (J.M. Coetzee’s ‘The Childhood of Jesus’) mentions Jesus by name precisely 0 times in 288 pages.

The other, Colm Tóibín’s ‘The Testament of Mary’, was recently shortlisted for the Booker Prize. Tóibín’s previous work includes ‘Mothers and Sons’ (short stories) and, more recently, ‘New Ways to Kill Your Mother’ (an eclectic collection of essays which moves from Jane Austen to Barack Obama). An exploration of a mother/son relationship, then, is hardly new ground for Tóibín, and the book opens with a sense of weariness, of old roads taken and retaken:

‘But nothing escapes me now except sleep. Sleep escapes me. Maybe I am too old to sleep. Or is there nothing further to be gained from sleep.’

Repetition is carried almost too far, but Tóibín is in good company. Nabokov, seeking to pin down Tolstoy’s stylistic quirks, wrote that ‘He gropes, he unwraps the verbal parcel for its inner sense, he peels the apple of the phrase, he tries to say it one way, then a better way, he gropes, he stalls, he toys, he Tolstoys with words.’

And there is perhaps something of Tolstoy in Tóibín’s deliberately meditative style, fingers fumbling at ‘the verbal parcel’: remarkably, in a book that manages to cover the crucifixion, the ‘water into wine’ miracle and the resurrection of Lazarus in around a hundred pages, Tóibín’s writing almost always gives the impression of moving slowly.

‘The Testament of Mary’ is Tolstoyan, too, in its overarching concern with history. Tóibín’s Mary is visited regularly by two unnamed men, ‘hungry and rough… a brutality boiling in the blood’, who draw out her memories of Jesus’ life. ‘What is being written down,’ they tell Mary, ‘will change the world,’ and the reader is invited to pause and reflect that the men (one of whom is almost certainly John) are, in a sense, speaking the truth: the written version of Jesus’ life has, of course, played a crucial role in shaping nearly two thousand years of history.

‘Words matter,’ Mary reflects at the close of the novel, although her own words are often disregarded. She insists that she fled from Golgotha on the night of the crucifixion, but the shadowy scribes tell her that ‘You were there… You held his body when it was taken down from the cross.’ She remembers the resurrection only as a dream she shared with Mary Magdalene, and casts doubt on the nature of Jesus’ miracles.

Describing her son supposedly ‘walking on the water as though it was smooth dry land’, Mary suggests that ‘There must have been other stories, and perhaps this one I heard only in part, perhaps something else happened…’

To acknowledge that ‘words matter’ does not preclude admitting that words can be deceptive. Mary’s more nuanced recollections of key events, often a blur of memory and dream, are superseded by ‘other stories’ — stories with a more definite, more dogmatic conception of history; stories that are further from the subtlety of the truth and therefore more likely to be believed.

Tóibín’s Mary is often a rather spectral presence, and his biblical world is composed mainly of shadows. It’s worth pausing to contrast Tóibín’s crucifixion scene with, for example, Bulgakov’s in ‘The Master and Margarita’. Bulgakov evokes an ancient world by lingering on the physical details, describing the paraphernalia in the prisoners’ carts (‘freshly sawn posts and crosspieces, ropes, spades, buckets and axes’), the ‘green-backed lizards’ darting between cactus plants and broken stones under the ‘pitiless sun’, the clothing and helmets of the Roman soldiers. Tóibín’s descriptions of the same biblical scene, aside from a disturbing anecdote about a caged bird, ‘all sharp beak and indignant gaze’ ripping open the live flesh of rabbits, are deliberately vague. This crucifixion, rabbit guts excepted, is oddly bloodless.

Tóibín’s Mary is often a rather spectral presence, and his biblical world is composed mainly of shadows.
Tóibín succeeds in creating a world of the intellect — a world in which competing narratives fight for control of history, and Jesus’ circle believe that they are winning a battle against death (‘Lazarus may be merely the first… This may be what we have waited for, and that is why the crowd has come here and there are men shouting in the night’) — but physical details are left almost entirely to the imagination. Where Bulgakov shows the reader his green-backed lizards and his cactus plants, Tóibín is content with a simple ‘The day was hot’ or ‘The sky had been so blue, the day so hot’.

Does that lack of specificity lend the book a sense of timelessness? Overcoming time is a major theme: Tóibín uses Mary’s testament to lead an investigation into the desirability of death, and reaches an intriguing conclusion. Mary tells her interlocutors that her son’s death ‘was not worth it. It was not worth it.’ (Again, repetition heavily underscores the point.) Earlier in the novel, she expresses the belief that ‘no one should tamper with the fullness that is death.’

Tampering with death is precisely what Jesus does at Bethany, raising Lazarus from the grave. Tóibín’s Lazarus is unusually vivid, ‘dirtied with clay and covered with graveclothes’. He moves, ‘jerking and wriggling’, insect-like from the grave, and Tóibín gives us a resurrection characterised not by joy but by a kind of dull horror. Lazarus lies in a darkened room, barely able to swallow bread or drink water. ‘If he had come back to life,’ Mary remembers, ‘it was merely to say a last farewell to it… There was something supremely alone about him… he was in possession of a knowledge that seemed to me to have unnerved him.’

Like Eliot’s Magi, Lazarus would be glad of another death; Mary, too, longs ‘to sleep in the dry earth’ and equates death with freedom.

Tóibín’s Mary is a far more complex character than she initially appears to be. A reader who picks up ‘The Testament of Mary’ expecting Tóibín to fill gaps in the narrative of the gospel, to present a strong woman driven by love for her son, is likely to be left disappointed. This Mary appears half in love with easeful death, and willing to contradict the disciples who expect her to agree that Jesus ‘by his death … redeemed the world.’

Mary’s testament turns out to be full of blurred memories and half-truths, and is all the more compelling for seeming somehow incomplete.

In Memory of Kailashpati Nishad

"who could have thought/ that death would come like this –/ like a bird." By Kedarnath Singh, translated from the...