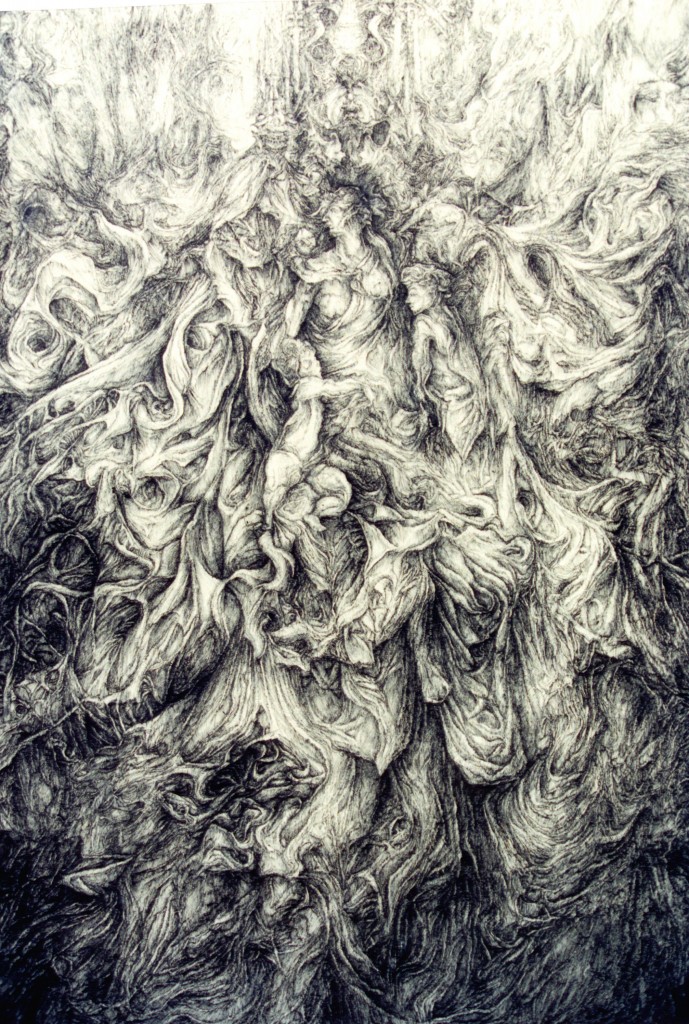 When Anand was fifteen, he threatened to jump off the roof unless the 13-year-old girl next door said she loved him. He was standing on the ledge, his gangly arms and legs cutting thin, jagged lines against the sky. The girl was at her window, looking up at him with wide, terrified eyes as beads of sweat gently blossomed on her upper lip. Kavitha was telling her to just say it, because it was just I love you and didn’t mean anything. It was when Anand pretended to almost fall off the ledge that I saw the twins — he had chained them to his waist and they were squalling, grasping desperate fistfuls of air with their tiny hands, the skin on their heads already splitting into velvety petals of dark red.

Later that evening, when the 13-year-old girl was being blamed and beaten by her uncle for Anand’s behaviour, Anand explained that he had just taken the twins with him for good luck. He peered into the box where they both lay shivering, chunks of turmeric sticking to the splits in their skin. One was sleeping but the other was looking up at Anand, its mouth open in a small, mournful ‘o’.

“Fuck off,” it said, trying to kick Anand in the chin.

“Kicklee paya,” said Anand, pressing his finger into its face until it started to beat its little arms against his broad hand. He only stopped when someone from the kitchen said the food was ready — they had made him chicken and fried fish as a reward for not killing himself. Kavitha and I sat with the box between us, watching the twin cough and shudder.

Later that night, our grandfather took the twins and said that if we ever saw Anand go near their box again, we were supposed to tell him so he could break Anand’s arms and legs.

Over the next four years, Anand threatened six more girls with suicide. The 13-year-old girl moved away and a tailor set up shop next door. A tiny tree with pale green leaves grew so resiliently on one of the twin’s backs that it seemed like the twin was finally going to die. But the tree eventually withered, falling away in moist, black lumps that smelled like mud. Anand left home, disappearing one night with anything of value he could find in the house.

When I saw him again, our grandfather was dead. Kavitha had left long ago and nobody knew where she was. The house was empty except for me and some plastic chairs. Anand arrived with a pot belly and an indifferent five-year-old girl on his arm whom he kept plying with cream biscuits and promises that they would be leaving soon. He sat in the room where he had once tried to suffocate one of the twins — his stomach strained against his shirt and a sour, heavy smell of body odour settled over everything.

“I wanted her to see them,” said Anand. “Are they with you?”

“Is she your daughter?” I asked.

“This is Ammu,” he said, trying to wipe the girl’s nose with a bright blue handkerchief. I watched as he awkwardly grabbed her chin, and then muttered something as she pushed him away.

The twins had been handed down in our family for generations because we couldn’t get rid of them. They were small and speckled with scars from the various times people had tried to kill them. We kept them in a broken wooden box that smelled like cough syrup and was covered in newspaper cuttings of Ian Botham. Nobody knew much about them, except that they looked like small grey stones when they were sleeping. Their skin split when they were upset, their limbs were prone to breaking and seeds sometimes took root in their skin. The only time they had ever been outside was when Anand had taken them to the roof.

“I just wanted her to see them,” said Anand. “Maybe take a picture. I have a camera on my phone.”

He asked how I was doing and said I should visit him sometime because it wasn’t that far, one straight bus. Then he asked for a glass of water. I went to the kitchen and waited by the stove. I could hear him yanking open different almirahs, shuffling through old clothes and papers. Then I heard him say ‘ah!’

From the window I could see him, almost running, the girl under one arm, the wooden box under the other. He hadn’t even bothered to remove the old saris it was wrapped in and they trailed behind him, sometimes snapping at his heels, sometimes curling into the late afternoon sunshine like they were waving goodbye.

The new box was smaller but cleaner and only smelled like cardboard. The sleeping twin was curled around a rubber ball that I had given them to play with. The other was looking up at me- the plant that had taken root behind its ear was already dying, its leaves curling up like small fists.

“I’m going to kill myself,” it said softly.

I pinched off some of the dead leaves — they came away easily, falling gently into the palm of my hand.

I touched its forehead, tracing a scar that ran down to its neck and then disappeared somewhere inside its thin, wrinkled skin.

Kuzhali Manickavel is the author of a short story collection called ‘Insects Are Just like You and Me except Some of Them Have Wings’ and an e-chapbook called ‘Eating Sugar, Telling Lies’, both of which are available from Blaft Publications.

“I can remember a time/ my father pulled me onto his shoulders/ telling me/ Everyone will hurt/ you. Don’t forget that”
Weekend poem, by Alexis Groulx.

Passage Through the Zone

Fear of the new and unexplored take center stage in this essay by Senior Film Critic Rhea Cinna on Andrei...