according to the opinion of Jay Sizemore 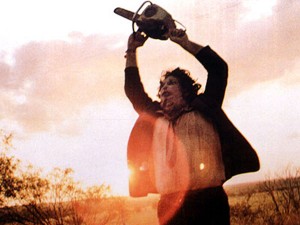 1. The Conjuring: I just wrote an entire article (soon to be featured in The Missing Slate) devoted to why I think this film is the scariest one made to date. What you have is the perfect mix of scary movie ideas: haunted house, haunted objects, possession. The real mastery of the film, is the way it builds up the subtle scares so that by the end, when it is reaching its harrowing climax, your senses are so keyed up, even as a rational adult, you want to run screaming from the screen just to get away from the experience. A truly terrifying movie made by James Wan.

2. Insidious: James Wan gets the first two slots in this list, because he has mastered the art of scaring his audience. The setup of Insidious is very similar to that of The Conjuring. The differences become more evident when the climax of the film revolves more around astral projection than possession. As in The Conjuring, Wan builds up the intensity of his scares throughout the picture. This film gets a little more ambitious in its fantastic elements towards the conclusion, and some people find it hard to take the leaps, even though they have already allowed for the existence of demons and paranormal interactions throughout the rest of the movie. For me, it is still a haunting work, that will have you watching the shadows.

3. The Ring: Gore Verbinski’s remake of the Japanese film remains to this day an excellent example of how visual stylization can impact the viewer. It also has amazing acting from Naomi Watts, which makes the suspension of disbelief that much easier. The premise of this movie is one that needs that suspension to work, but in these capable artists’ hands, it does so with ease. There is a haunted video cassette that, if you watch it, the ghost of a traumatized little girl will take your life as penance within seven days. The creepiest part is the phone call that you get within seconds of watching the tape. Despite the fact that no one owns VCR’s anymore, this premise is still effective.

4. The Texas Chainsaw Massacre: This is another film that takes the “Based on True Events” premise, and uses it to maximum effect. In this case, it is the disturbing reality of the fragility and dangers of the human psyche. Who knows what really happened in that Texas farmhouse, but the events portrayed in this narrative are possible enough to make you leery of strangers for the rest of your life. Tobe Hooper directs this film on a shoestring budget, which gives it a more sinister and realistic tone, like a found footage film before found footage films, from an outside perspective. There are moments here that will make your skin crawl, and get as close to feeling the insanity of the moment as a film can get. You can’t shake the idea from your mind : this actually happened.

5. Halloween: John Carpenter’s classic is still a must-see after all these years, and is still the ultimate supernatural serial killer film, as it is the one that started it all. This movie has one of the best soundtracks in horror cinema, with music composed by Carpenter as well. You just have to hear those three piano notes played over and over to instantly get in the mood for fright. Michael Meyers is a film icon, and one of the scariest villains, as his stealthy presence, except for the breath resonating in his mask, is like Darth Vader with a blood lust. The great thing about this movie, is it brings home the notion that evil can be anywhere, hiding where you least expect it.

6. High Tension: Here is an excellent horror film from France, with yet another scenario involving a ruthless killer who goes after two college girls home for the summer. The title says it all, as once the ball starts rolling, the tension never lets up until the end. This movie hits you again and again with scenarios that put you on the edge of your seat, as you root for the girls to survive, through the grisly and brutal path the killer takes to accomplish his goal. The camera work and perspectives used throughout enhance the dramatic irony needed to make the tension and fright it hopes to convey a successful venture. This film also offers an interesting twist at the end, one that only the viewer can decide if it really works. For me, it does.

7. The Strangers: This film takes the nihilistic approach to horror, in that it provides a completely horrifying scenario of home invasion and murder, and it provides this scenario without the presupposed premise that these type of things always happen for a reason. The lack of reason for these killers to do what they do, in effect, makes it even more frightening. There are also moments of pure genius in this movie, involving realism as to what type of chaos would ensue when a group of people suddenly are forced to fight for their lives. It’s bound to not be pretty. This movie will scare you, and then leave you with the empty shocking truth, bad things happen to good people without reason or consequence.

8. Night of the Living Dead (original): The original zombie classic has only gotten better with age. It still has one of the best premises for a scary movie: dead people return to life to eat the living, and a group of strangers barricade themselves in a house together and try to survive. George Romero utilizes the situation to build natural tension in the audience. It also contains still, to this day, one of the most disturbing sequences ever put on film, in a which a child murders then eats her own mother.

9. Candyman: Clive Barker writes some of the creepiest stories, and this one is no exception. Here we get a tortured soul who was murdered in a horrific manner, who returns to exact revenge, but only on souls dumb enough to ask for it. The urban myth is used here, a twist on the old Bloody Mary tale, in which someone has to stand in front of a mirror and say a name three times. This story is unique and bizarre, and even more frightening because of it.

10. The Mothman Prophecies: Here is another movie supposedly “based on true events,” that will crawl into your brain and make every odd coincidence or strange sound seem malevolent in nature. Richard Gere plays a journalist sent to a rural community in West Virginia, already scary enough, but he is also there to investigate strange paranormal occurrences that the people there have been reporting. This is much more psychological in nature than the other films on this list, as the fear in the viewer will be related to how much they are willing to believe the story being told. If it gets inside your head, prepare for a sleepless night.

Honorable mentions: What Lies Beneath, The Serpent and the Rainbow, A Nightmare on Elm Street (remake), The Brood, The Omen, The Howling, Eden Lake, The Amityville Horror, In the Mouth of Madness, The Devil’s Backbone, Pet Sematary, Poltergeist

Jay Sizemore is a film critic for The Missing Slate. Read all about him here.

The Missing Slate’s Film Critics, Rhea Cinna, Jay Sizemore and Shamain Nisar gather to discuss the upcoming Oscars. Who will win, who should win,…

"Twilight was shimmering around us when we saw them again. They were closer to the house this time." By Cynthia...