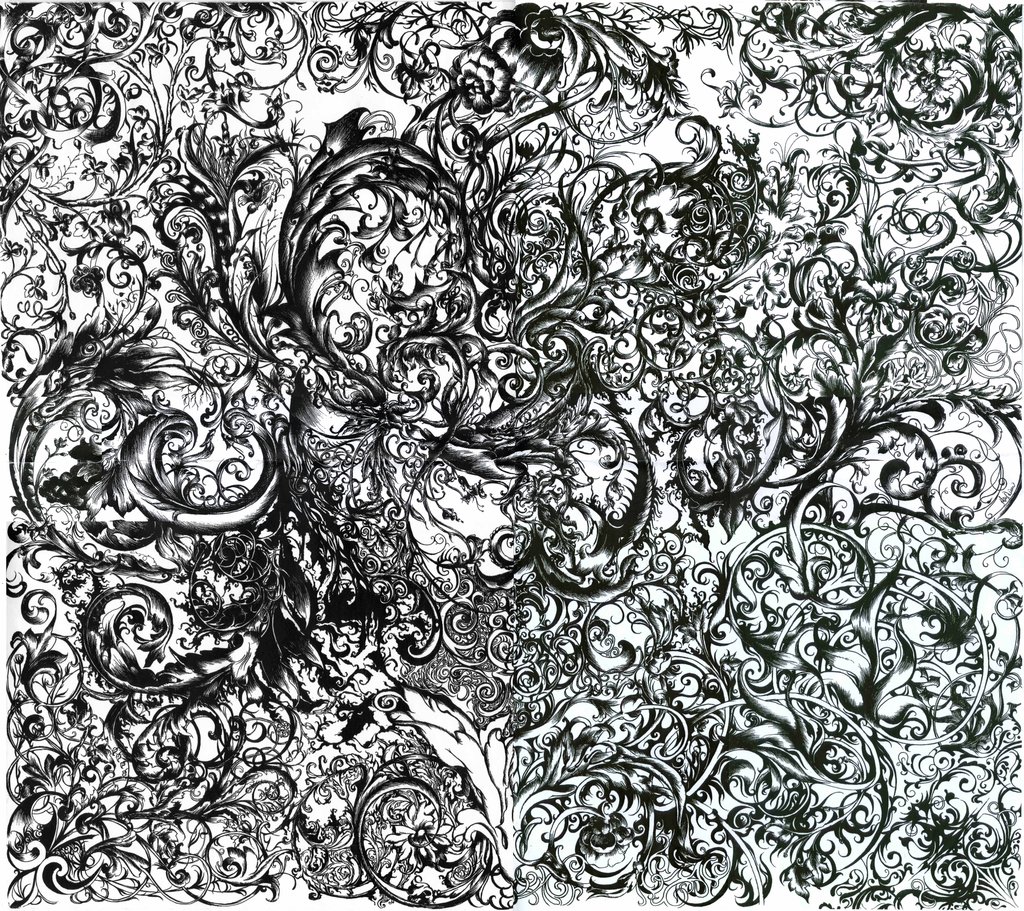 Death of the Baroque by May Lim

I was looking for peace and quiet, a refuge from the Petersburg streets full of slow Russian hurry, skid marks and broken glass; full of flustered, dehydrated tourists with fingers pressed over wallets in a perpetual state of alert, of pickpockets magically aiming to slip beneath those guarding hands, of police roadblocks aimed at catching potential terrorists from the former Soviet republics, of young teenage girls on horseback offering tourists rides and leaving hefty piles of manure on the sidewalks with glamorous unconcern, of Kazakhs in mirrored shades and visiting Muscovites with gold jewelry glistening in the sun.

It was the glistening I noticed that day, and not only in the rings, necklaces, earrings and sets of teeth, but emanating from the church spires in reach of the slanting sunlight and the hubcaps of luxury cars. And then I saw something gold, shimmering and vaguely familiar through a café window on the other side of the Nevsky Prospect.

I was halfway across the street, with one of the city’s multitude of gypsy cabs bearing down on me, when I realized that the guiding star leading me to productivity was actually the platinum blond hair of one of the fellow wannabe writers at the workshop I was attending here; Suzie, a former cheerleader who had traded in her pom-poms for a pen.

“Hey, come join us,” she said when I approached the empty seat at their table for four. “Now we can get an objective opinion.”

As usual, Suzie was with Diane. The roommates went everywhere together and had formed in the space of a few days the kind of ambivalence toward one another it usually takes years of a relationship, if not actual marriage, to create.

“You won’t believe what she said about me!” Suzie cried out.

“Oh, it’s no big deal… just that she would never write, which is true,” Diane said.

This seemed a pretty harsh statement to make of an aspiring author, but then I realized they were talking about writing letters to each other after the workshop was over, Diane being one of those people who hadn’t hung out with pretty, popular cheerleaders in high school and so was understandably skeptical that her newest friendship would stand the test of time.

Following the rules of cultural interaction I was prepared to nod a quick, indifferent hello at the Ivan, Dmitri or Sergei slouched in the seat across from my two fellow workshop attendees, and to receive his no less indifferent nod in return. This was how it worked. I would immediately consign him to the list of local guys hoping to pick up an American cheerleader, or in this case, ex-cheerleader, just as he would peg me for a guy aiming to have a potentially wordless, passionate encounter with a mystery-laden Russian beauty.

For once though I saw beyond type, looking past his wraparound shades and obvious self-involvement to see the actual person behind the stereotype.

He had to lift his sunglasses up to be able to recognize me.

“But what are you doing here? I thought your fate was in New York.”

“Fate… yes, who knows what strange and wondrous paths it may lead us on.”

He ended this with an unmistakable stare into Suzie’s eyes, although like a movie camera he followed it with a slow pan to take in Diane as well. Evidently, she was his backup plan.

I nodded. What else was I supposed to do?

The wax wrapper was still lying on the table – green and white-striped without any logos or words, like a cartoon prison uniform made of paper.

“No,” Vassily said with a wave at his pocket.

“Then why can’t we have some candy too?”

Diane picked up the wrapper and scrutinized it through her wire-rimmed glasses.

“Not candy?” she said incredulously, “Then what is it? A cough drop?”

Vassily shook his head and said a word in Russian that none of us understood.

“It’s something Russians take too much of and gives us some of our worst… how do you say… characteristics.”

“Creep-to-what did you call it?” Suzie asked.

“Wait, you mean kryptonite?” I asked.

“You know it?” Vassily asked, surprised.

“But kryptonite is American,” Suzie said.

“No it’s not,” I pointed out. “It’s from the former planet Krypton.”

“In the comic or movie, whatever, but the idea is home-grown,” Diane corrected me.

“I beg to differ,” Vassily said, the apparent source of our disagreement still swishing around his mouth. “Kryptonite is not an idea, and it is most definitely Russian.”

He pulled out another piece. Its green color was more artificial than the most artificial dye I had ever seen, more green than the green of absinthe, and was shimmering in the sunlight like a radioactive emerald.

Vassily led us to a riverside bar where we drank cold beer and watched the boats criss-crossing from bridge to bridge. Brides and grooms would parade by every few minutes, take photos, propose toasts and make room for the next wedding party, while tourists were following their maps to destinations beyond our concern.

“Vassily, you have to be putting us on about this Russian kryptonite,” Diane said, her speech beginning to slur a little after her fourth or fifth beer.

“Putting you on what?”

“I mean that you’re joking. I know we’re naïve Americans and blah blah, but c’mon – kryptonite is from Superman.”

“You know!” Suzie interjected. “Up, up and away, faster than a speeding bullet – the superhero! With superpowers.”

“Superman, you say?” Vassily mumbled, musing over the name which we all assumed he must have heard of. “And you say he has special powers… you mean of thinking?”

“No Vass, he can leap over a building in a single bound and stuff like that. Get it?” Suzie said.

It was strange, but as we went on to define Superman’s powers a look of annoyance began to flash in the Russian’s black eyes.

“Yes, I see… well, this is another typical American innovation. You take an invention, an idea from another country and idealize it completely in a ridiculous way.”

He was sincerely angry about this. Even his planned seduction seemed to have faded from his mind.

“I think you’ve lost us here Vassily,” I said in as conciliatory a tone as I could muster. “Superman is about as American as you can get.”

At this point he was just trying to restrain himself.

“I will explain it… what you call a superman…”

“Not a superman,” Diane interrupted. “There’s only one. It’s his name – Superman.”

“Only one!” Vassily gasped. “I live in your country and still am amazed constantly. Only one! Well, then I must inform you that your Superman too is not at all of American origin. He is European, actually Russian.”

“But he also came from the planet Krypton,” Diane said.

I didn’t bother mentioning the fact that Krypton was destroyed. Diane kept silent too.

“She had a thousand questions she would like to ask: what he did, if he had children, where he had studied, where he lived. She wanted to be able to place him in the world, to know who he was.” Story of the Week (February 26), by Teolinda Gersão. Translated from Portuguese by Margaret Jull Costa.