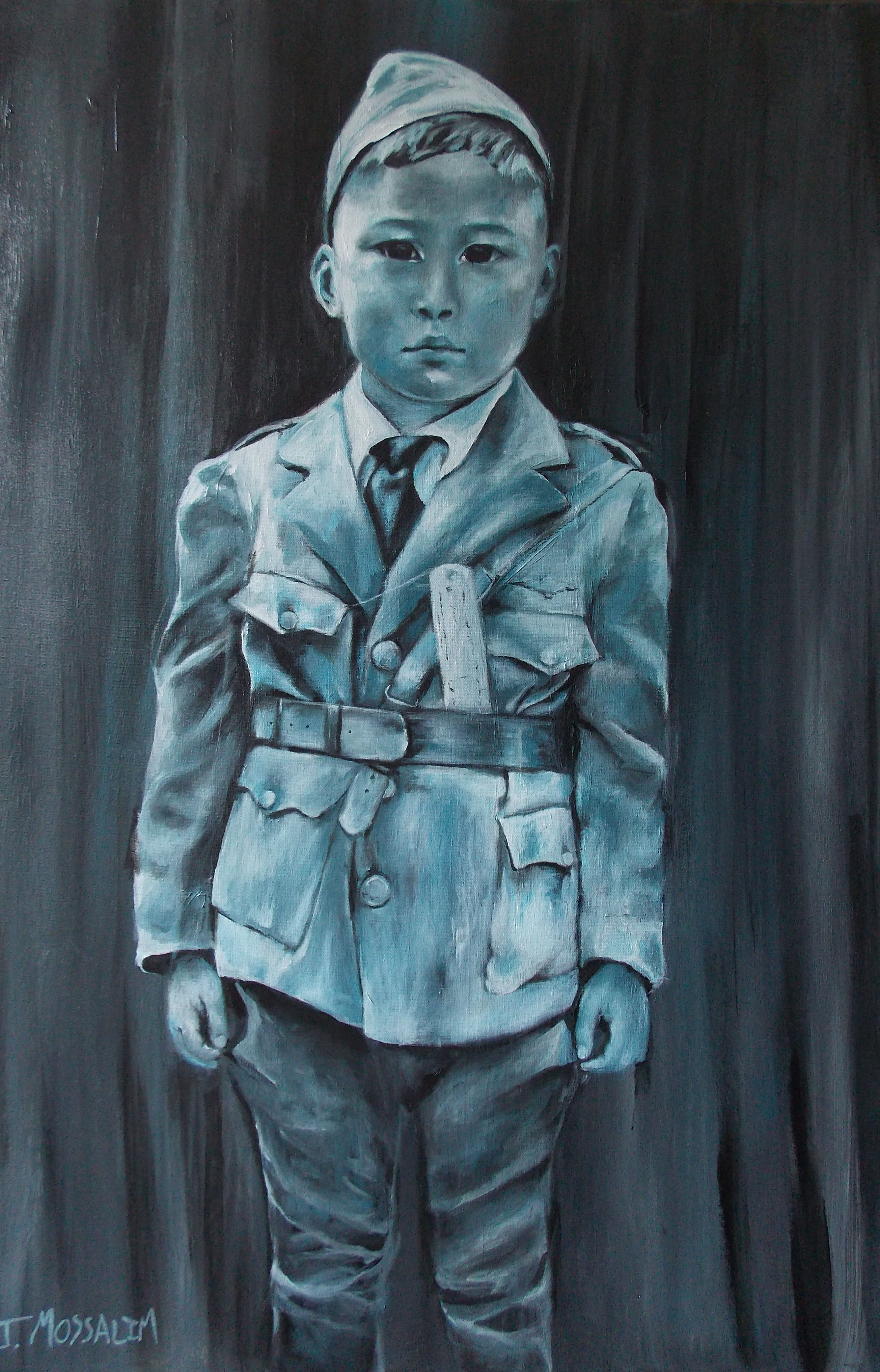 An American Boy by Jihane Mossali

Dr. Finley sat in the corner and watched Zeke step to the other counter in the examination room.  He opened a drawer and took out a pair of shears.  They were the heavy stainless ones, with short blades.  Zeke snipped them once and then he cocked his head, as if he were listening to something.

Finley thought Zeke was probably twenty-eight or -nine, like himself, but he looked older.  He was big and burly but there was some looseness in the flesh of his face that indicated he hadn’t been eating lately.  He hadn’t been sleeping either.  The overhead fluorescents made the circles around his eyes stand out.

Zeke’s lips moved but Finley couldn’t hear what he said.

Zeke looked at him.  “I was just thanking the Lord, doctor.  You should thank Him too.  I don’t have to kill you now.”

Finley felt himself relax for the first time in more than an hour, since the incident began with a muffled shout in the hallway outside.  There was the shout, a crash, and then Zeke (that’s what the man’s name turned out to be), Zeke threw the door open and stormed into the room brandishing a sawed-off shotgun.  He shooed the nurse and patient away, slammed the door and turned to Finley.  “You’re the one I’ve come for,” he snarled.  “The abortion doctor.”

His jeans and T-shirt were threadbare, Finley saw, and his work boots were scuffed.  The only new article of clothing he had on was an oversized windbreaker.  Probably bought for the occasion, to sneak the gun past security.

“I’m a gynecologist,” Finley said.  “Abortions are only a part of what I…”

The gun was down at Zeke’s side.  He jerked it up and aimed at Finley from the hip.  Finley stumbled back.  The seat of the chair in the corner hit him behind a knee and he sat down with a grunt.

Zeke pumped the gun’s slide.  It made a loud clack-clack sound.  The examination room was soundproofed with thick walls and acoustical ceiling tile, and Finley wondered what the blast would sound like from outside.  A whimsical thought.  Odd that it should be one of his last before he died.

Zeke threw the door open and stormed into the room brandishing a sawed-off shotgun…  “You’re the one I’ve come for,” he snarled.  “The abortion doctor.”
But Zeke hesitated.  He held the gun leveled at Finley’s head but didn’t shoot.  He fingered the trigger, and in the eternity of the next couple of seconds Finley recalled something from the hostage seminar they’d made him attend when he came to work at the clinic.  That was only five months before, and he remembered one of the lecturers saying that a majority of the people who create problems at women’s clinics are fundamentalist Christians.

“Thou shall not kill,” Finley blurted, hoping that he was dealing with a Christian.  The gamble paid off.  Zeke’s finger eased away from the trigger, the gun lowered and he said, “How dare you quote that Commandment.”

For the next hour they debated.  Zeke barricaded the door, and then he paced the linoleum and spouted Bible passages while Finley stayed put and responded.  The seminar training no doubt saved his life.  Zeke reeled off verse after verse that he claimed condemned abortion, but because of the training Finley was able to point out the flawed logic in each quotation.  He did it carefully though, and he continued to be careful even after Zeke grew tired of holding the shotgun and hung it by its sling over his shoulder.  Zeke was powerfully built and looked like he could do all the killing he wanted with just his big, callused hands.

And then, out of the blue, Zeke found the shears and said he wouldn’t kill him.

“That’s…that’s good news, Zeke.  You’ve made a wise decision.”  Finley looked at the door.  The room was in the center of the clinic, with no windows, and only one door leading in and out.  At the moment all the furniture but his chair was piled against the door.  The examination table was upended with its stirrups in the air.  “There’s probably a SWAT team in the hall by now, Zeke, so if you’ll clear the doorway, I’ll go out and tell them you’ve changed your mind.  They won’t shoot me, and since you haven’t hurt anyone yet, I’m sure they’ll just…”

Finley started to rise from his chair but Zeke motioned him to stay seated.

“No, doctor, you don’t understand.  I just had an epiphany.  A kind of vision.  The Lord really does work in mysterious ways, like the song says.”

“Well, I’ve had a change of heart, thanks to Jesus.  He reminded me of some Scripture.  It’ll save your life, but there’s still a price to be paid.  Can you guess which Scripture I’m talking about?”

Finley couldn’t recall going over that one in the seminar.  He shook his head.

“‘If thy right hand offend thee…’  Aren’t you right-handed, doctor?”

“Yes, I am, but what does that have to do with anything?”

“Well, Jesus said, ‘And if thy right hand offend thee, cut it off, and cast it from thee: for it is profitable for thee that one of thy members should perish, and not that thy whole body should be cast into hell.'”

When Zeke finished speaking he snipped the shears, and Finley suddenly understood what he planned to do.

“You…  Are you going to cut off my…”  He stopped himself.  No need to plant the idea if he was mistaken.

“The coal in his eyes, in his ears, on his lips, in tears/ that cleansed his corneas, in fingernails. The coal…”
Poem of the Week (9 July), by Somendra Singh Kharola.

Senior film critic Tom Nixon writes on one of this decade's finest melodramas.