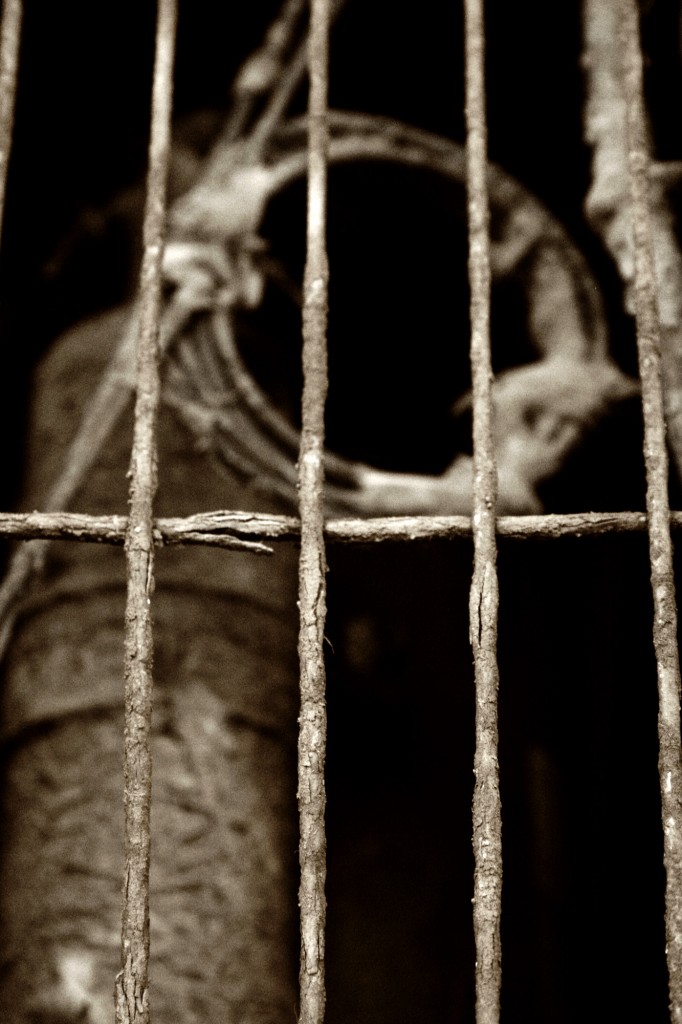 Domestication: A View from Prison, by Brett Stout

We lived deep in the jungle. To reach us, it would take two full days on foot from the Mekong Delta. We hacked away brush and vines and bamboo thickets and leveled the fern-covered ground to build our camp. Above us rose very tall, giant trees, one rising above another so that they formed foliaged crowns so thick when it rained it became drips sluicing down the underneath curves of the vault. When the sun reached its zenith at midday, it felt like twilight below.

The American prisoners were quartered in a thatched hut, low lying with three mud-and-bamboo laced sides. Its open side faced a guard shack outside the bamboo enclosure. I could see them moving around, drooped, heads bent. The hut was built that way so that, to move around, the prisoners had to lower their heads all the time. That adopted posture would eventually affect their psyches. Outside the fence, along its base where the earth was thick with creepers, a line of bamboo stakes were planted underground. I knew that none of the prisoners would ever try to escape, because the booby traps might not kill them but the wilderness beyond would.

He was one of the first American prisoners of war I saw. He could speak Vietnamese and, unless in long sentences, he had only a slight accent. I heard his prison mates call him Ian. Later I heard that he’d been with us for six months. They captured him before his friends got to him. Then they had to carry him. His legs were messed up badly from one of our hand-made mines. A piece of metal from the mine was still lodged in his head. He said our doctors told him they couldn’t remove it, not that they didn’t want to try, but they didn’t want to risk his life if they did. So now he only slept on the one side opposite the side of his head wound. He said it gave him a numbing headache if he slept on the other side. It was his bad karma, he said, that he stepped onto the mine. He said it in Vietnamese and we all laughed at the word he used. Nghiệp. Smart man. Said the mine was made from a howitzer shell. American artillery shell, he said. Then he winked at us as we sensed the irony.

He was one of the first American prisoners of war I saw. He could speak Vietnamese and, unless in long sentences, he had only a slight accent.
When the mine sprang on him, he screamed, then blacked out. Waking he felt like he’d just got hit on the side of the head with a blackjack. O death, where is your victory? O death where is your sting? he said the Bible words in his head. He saw faces looking down at him. Crowned by oyster-colored pith helmets. He said―without even opening his mouth―Pleasehelpme!

Now I looked at him, his frail frame, his red-haired head always lolling to one side, the opposite side of his head wound. I said to him in English, “No one wants to die.”

“To die is gain,” he said, then quickly added, “that’s from the Bible. You Catholic?”

His lips puckered, he eyed me. He looked so gaunt, so malnourished  his cheekbones cut sharp like Vietnamese cheekbones.

“I’m surprised they didn’t kill you back then,” I said.

“They didn’t,” he said, this time in Vietnamese. “But the people in the next village almost did.”

“This woman came running to me,” he said. “She had a hoe in her hands. I was in a litter. The guards did not see her. I raised one arm to avert the blow. I grabbed a guard by his shirt with my other arm. He turned. I shrank to the size of a rabbit. He grabbed the hoe and shoved her back. She shot her finger at me repeatedly and words flew out of her mouth. I’m sure they must be scathing.”

His words came out slowly. His Vietnamese accent was neither northern nor southern. It had a neutral intonation. He must have picked up the language from all sources of speakers. He could talk small talks in Vietnamese. When he talked at length, he’d throw in English words. Likewise, I’d fall back on Vietnamese when I talked at length with him in English. And we had done just fine in our small conversations.

He paused to regain his breath. His eyes were serene. Light golden-brown eyes. They never darted while he spoke to you. Never a second thought fleeting in them. I liked him.

He asked for a Vietnamese word. Cinders. Then another. Mortar. I told him. He said, “Then I saw many huts burned to cinders on our way through. Like half the village was gone. People gathered along the dirt road. They pointed toward me on the litter and yelled Meey! Meey! I felt that I was the main attraction. We went past a graveyard. There was a number of fresh graves. I could tell by the color of fresh dirt. In front of a grave I saw three mortar shells laid out in a row. Iron-rust color. They were duds.”

He said the word “duds” in English. I said I knew what it meant. He said, “I’m sure later they will be used as booby traps on us. Then a guard spoke to me in his broken English, ‘See that man?’ I tried to follow his hand pointing toward the crowd. ‘See that woman? That boy?’ Then he pointed toward the fresh graves and kept nodding at me. I couldn’t help thinking that one of those fresh graves was for someone from the woman’s family.”